7 years of our all-volunteer team across 6 continents collaborating to raise awareness, funds and volunteer power for the movement to end Violence Against Women (VAW).

7 years of establishing and growing our ongoing anti-VAW campaigns, projects, and programmes.

7 years of creating social media-based platforms that make it simple, enjoyable, and fun for everyone from the person on the virtual street to various online communities to get on board the cause to end VAW.

7 years of persistence in experimenting with (and implementing) positive, innovative and effective new ways of using online tools, social media, and pop culture/the arts to get the conversation about VAW going amongst individuals and communities.

7 years of helping amplify the positive stories of people around the world working to stop VAW as well as the women and girls who survive VAW tell their stories.

7 years of building partnerships with allies that range from anti-VAW organisations and campaigns of all shapes and sizes, to award-winning bestselling authors, to music artistes using their songs to sound the clarion call for the end to VAW.

7 years of developing and running our massive flagship Celebrity Male Role Model Pixel Reveal campaign in an effort to accelerate the shift in the conversation towards including men and boys in helping stop VAW.

It’s been 7 interesting and action-packed years, to say the least!

2015 has been a year of progress and growth for The Pixel Project in terms of both fundraising and awareness raising.

On the fundraising side, 2015 was the second year of our massive multi-year flagship Celebrity Male Role Model Pixel Reveal campaign in aid of the National Coalition Against Domestic Violence and The Pixel Project, raising another $13,697 (13,697 pixels) to reach $24,059 (24,059 pixels revealed) by December 31st 2015. This is a small but solid increase from $10,362 (10,362 pixels revealed) raised in our first year of our campaign… and we can now see bits of the first Celebrity Male Role Model’s shirt clearly (check it out here: http://reveal.thepixelproject.net/view-celebrity/ or on the homepage here.)

We raised the funds via four (4) fundraising events:

The bulk of the funds were raised via our Read For Pixels campaign events:

Since Read For Pixels began in 2014, we’ve had the honour of the support of 41 award-winning bestselling authors, with 24 of these worthy wordsmiths joining the campaign in 2015. They spoke out against VAW via live Google Hangout sessions and helped raise funds for the Pixel Reveal campaign via Indiegogo fundraisers choc-a-bloc with exclusive geeky goodies. 2015 Read For Pixels authors come from a wide range of genres and included well-known names and fan favourites such as Charlaine Harris, Meg Cabot, Tad Williams, Jonathan Maberry, Jennifer L. Armentrout, Rick Yancey, Lauren Beukes, and Marie Lu. Check out the full list of authors here and here.

We also discovered that Indiegogo weren’t kidding when they said that having a video intro for our fundraising page would help tremendously – 8 out of the 12 authors who took part in the Fall 2015 Edition of Read For Pixels recorded video shout-outs for the campaign which we edited together with shout-outs from the Read For Pixels team into our first Read For Pixels promo video:

The result? We hit our highest fundraising total ever within a single fundraiser – $8,000 (8,000 pixels revealed). This was almost double the initial $5,000 fundraising goal we had set!

The remaining funds were raised via:

1. The Music For Pixels Summer Charity Concert which featured 23 artists from 5 countries saying NO to Violence Against Women (VAW) with their music and raising funds for the cause. The concert was held in partnership with the Positive Music Association and ran from 10am EST – 10pm EST on June 6th 2015 as 6 consecutive 2-hour sessions. Each session featured 4 artists performing a set of their songs, talking about why they support ending VAW, and taking fan questions live. On Indiegogo, these artists offered donors fabulous giveaways and perks ranging from live Skype concerts to special goodie packs for fans.

2. Our first ever #GivingTuesday fundraiser featured a range of exclusive goodies donated by 8 music artistes and 5 award-winning bestselling authors to encourage music fans and book lovers to give to the Pixel Reveal campaign. Learn more about it here. 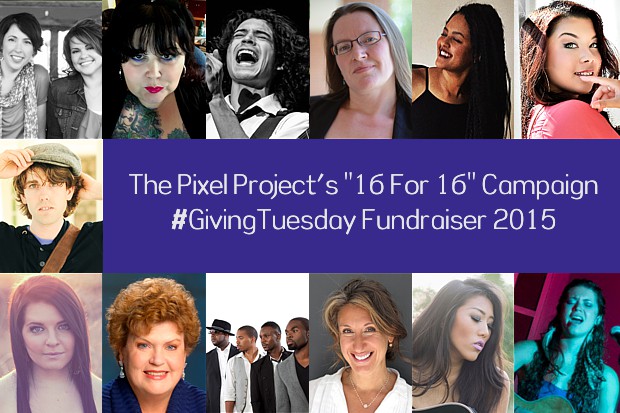 On the awareness-raising side, the rest of our ongoing campaigns continue to slowly but steadily build momentum and gain traction as they continue to support the Pixel Reveal campaign:

As always, we’ve achieved all that we have achieved as a team and in 2015, we welcomed the following volunteers:

And we bid farewell to Karina Tayag (our longtime e-News Digest Coordinator), Gina Yap Lai Yoong (our longtime graphic designer), and Samantha Carroll (dedicated Read For Pixels team member and writer) and wished them all the best in their next phase in life.

Finally, we thank all the donors who have donated to our general fund to help keep us alive as an organisation:

From Hitbox gamer JROD’s gaming marathon in December which inspired his fans to donate a total of $250, to friends, family, and VAW survivors who have donated what they can during these tough economic times – THANK YOU ALL SO MUCH! Even $10 helps so much in keeping our work alive!

The Pixel Project’s most successful anti-VAW programmes and campaigns are now out of training wheels and running more-or-less smoothly, so 2016 will be a year of continuity as well as development as we settle into a steady pace of growth.

We will be further streamlining our efforts by focusing on campaigns that are now established as our team continues to build momentum for our ongoing efforts to raise the $1 million (1 million pixels) for the Pixel Reveal campaign.

Our goal is to reach $40,000 (40,000 pixels revealed) or more raised in our marathon bid to unveil the first of our 4 celebrity male role models via:

We’ll also continue supporting the Pixel Reveal campaign via our annual campaigns including:

Crucially, there will be no new campaigns or flagship events launched this year. Instead, we will be using this year to work behind-the-scenes to develop new campaigns, fundraisers, and events that will be rolled out in 2017 and beyond.

We hope you are as excited as we are about 2016. If you want to get involved with any of these campaigns, we certainly welcome more volunteers and pro bono professionals joining us on our journey towards ending violence against women. Just fill in the volunteer application form and we’ll get back to you!

If you prefer to donate, you can donate in 3 ways:

1. You can donate to reveal pixels via the Celebrity Male Role Model Pixel Reveal campaign to help us reach our major fundraising milestone of $250,000 raised (250,000 pixels) and our first male role model revealed. Funds raised will be shared between The Pixel Project and the National Coalition Against Domestic Violence.

2. You can donate directly to us to help us keep our work alive. To donate to us and for more details about how your donation will be used, visit our donation page.