Skip to content
Home > Read For Pixels > ANNOUNCEMENT: The Pixel Project to Launch Audiobook of the Charity Anthology “Giving The Devil His Due” in Domestic Violence Awareness Month 2022 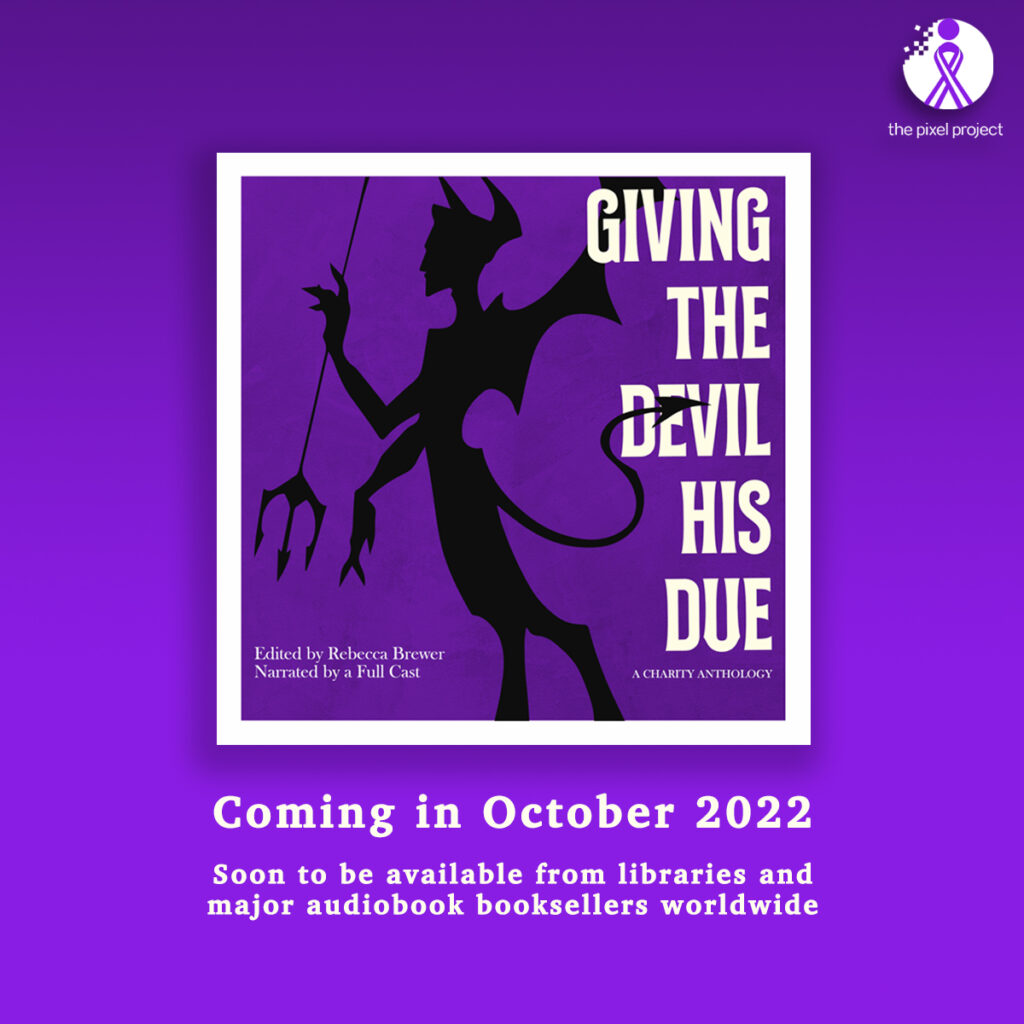 September 21st, 2022 (WORLDWIDE): The Pixel Project, an anti-Violence Against Women non-profit, is proud to announce the upcoming release of the limited edition audiobook of Giving The Devil His Due, their first charity short story anthology under their Read For Pixels programme, which will be available starting October 2022 via major audiobook platforms and libraries worldwide.

Produced in partnership with Voiceworks Audio, the sixteen speculative fiction stories in the Giving The Devil His Due audiobook are read by a cast of twelve of today’s finest audiobook narrators: Alyssa Bresnahan, Brian Nishii, Christina Moore, Cynthia Farrell, Edoardo Ballerini, Erin Moon, Karen Chilton, Kate Forbes, Nancy Wu, Robin Miles, Samuel Roukin, and Stephanie Cozart. Through their powerful performances, the anthology’s theme of men who perpetrate violence against women and girls meeting their comeuppance in uncanny ways comes to life with a Twilight Zone vibe. As with the print edition, the audiobook evokes the spirit of Rod Serling to tell compelling stories that will spark conversations about violence against women (VAW) amongst book lovers and fandoms worldwide while sending a clear message that misogyny, toxic masculinity, and VAW is unacceptable.

“The Pixel Project is honoured to partner with Voiceworks Audio to catapult the awareness-raising power of Giving The Devil His Due to the next level with this audiobook which has been a labour of love by the Voiceworks Audio team and the twelve audiobook narrators who generously donated their time and talent to this project,” said Regina Yau, Founder and President of The Pixel Project. “VAW is one of the most brutal, widespread, and entrenched human rights violations in the world and yet there remains a wall of silence around it in many cultures and families. We believe that stories have the power to give voice to this issue, and that audiobooks play a vital role in boosting the impact of stories to get people to think about and take action to stop VAW in their communities worldwide.”

The Giving The Devil His Due audiobook will be available on all major audiobook platforms in the United States and its territories, Canada, Europe, Asia, Australia, and New Zealand from 1 October 2022 to 31 October 2023 only. All net proceeds from the sales of the audiobook will go towards supporting The Pixel Project’s anti-violence against women programmes, campaigns, and resources.

The Pixel Project is a completely virtual, volunteer-led global 501(c)3 nonprofit organisation whose mission is to raise awareness, funds and volunteer power for the cause to end violence against women using  a combination of social media, new technologies, and popular culture/the Arts.