Our 1st 2018 Survivor Stories interview is with Ashley Ragsdale from the USA.

TRIGGER WARNING: The first two Q&As in this interview may be distressing for some Rape survivors.

My name is Ashley Ragsdale. I was born and raised in California. I am a mother, daughter, sister, friend and a survivor. I currently work for a national wholesale flooring distribution centre with inside sales. I absolutely love my job, love working and talking with people. I have a 3-year-old son who reminds me so much of myself, so much personality in such a little body. I have never spoken about my story since the prosecution but I think I’m at that point in my life where I feel comfortable enough to share it. In the future, I would love to work with young women dealing with the same situation. 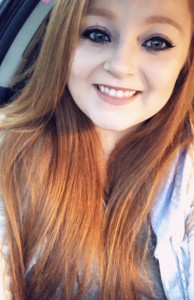 At the age of 20, I was walking from a friend’s house at about midnight to meet my ride to go home. I was attacked from behind by three men. They held me captive for close to two hours on the side of the road in a ditch, taking turns raping and beating me.

I could only fight for so long with there being three of them. One of the assailants choked me and I blacked out. After they were done with me they dragged me to a fence, laid me down in the bushes and ran off. One of the assailants folded my pants up and tucked it under my head as a pillow before he ran away. They took my under garments with them, ripped my jewelry off and stole my cell phone.

Once they were out of my sight I ran back to my friend’s house. After I told my friends what had just happened they jumped in the car and were able to find the men just some ways down the road. They held two of the men until the police came. The third man was located and arrested shortly after. Without the help of my friends, these predators would have never been caught. They are now serving a 25-to-life sentence for my attack.

I stopped physically fighting, as hard as it is for me to say that. I had no idea what these men were capable of. When one of the men started to choke me and I blacked out for a few minutes, I realised this was my only way out. I wasn’t sure if they thought they had choked me to death but whatever it was, it worked and they dragged me to the fence and left me.

I wasn’t finished fighting. I may have lost that battle but I fought until these men were sentenced. There was no way they were going to get way with doing this to me. I wasn’t the first but I’m glad I was the last and they couldn’t cause anymore hurt.

During the trial, I was informed that the same night of my attack they had attacked another woman who was she was able to escape them by causing the car to wreck and that’s why they were walking when they attacked me.

I have always been outgoing and what these men took from me was just that. I didn’t know how or who to trust. I had night terrors and horrible anxiety attacks. The problem I had was that I hated people to see my emotions. I pretended for a long time that I was okay so my family and friends wouldn’t feel ‘awkward’ around me. I think being a victim of something so violent I just didn’t want to feel so vulnerable again.

About a month after the attack I started to see a therapist who helped me tremendously. It was also little things that helped. Each year on the anniversary, my family and I sat down and wrote thank you card to all the attorneys and sheriffs who helped me throughout this process and I delivered the cards to them. I started to read survivor books and research online. There was one phrase that stood out to me and till this day I say it to myself all the time: “This is something you will never get over, you just have to get through it”.

I am once again outgoing and not angry at life. I make sure to enjoy every minute of it. I now can speak about the attack and feel comfortable enough to write this interview. I go days without thinking about it, in all honesty I don’t let this bother me because I know I came out on top. My son brings me so much happiness and one day I will tell him my story and hope he will spread my story.

Just breathe! No matter the situation, no matter who hurt you. It’s your life, take it back, take control! Do not let them win, nobody deserves to have your happiness but you. Whoever is hurting you or has hurt you, make them regret ever thinking about you. But always remember, don’t let them make you hate the world. There are so many beautiful things in life you need to smile at. Love and be loved!

Children need to be taught at a young age that when somebody does not want to be touched, not to touch. As hard as it is to raise children, they need to be taught that even as an adult you must control your emotions. What it comes down to is NO MEANS NO and you can’t always have what you want.

If we hear more stories of women and men coming forward and people being convicted of their crimes, instead of the survivor being shamed, I think more people will take this seriously. The justice system is so quick to put some sort of blame of the victim. It is nobody’s fault but the attacker.

Survivors need somewhere to go where we feel welcomed, where people are feeling the exact same way we are. The Pixel Project stays in the communities and gives you stories about other survivors to read. We get to see other women grow from their attacks. I love hearing about these beautiful women who have overcome and came out on top. I want to hear about how rape is handled in other states, cities and countries and what survivors are doing to beat it.