Our fifteenth 2015 Survivor Stories interview is with Michelle Jones from the USA.

Michelle B. Jones is a writer and advocate for survivors of sexual assault. She uses her blog, refuge2224.blogspot.com, to document her journey of four years. She also uses it as an outlet for other survivors to share their stories anonymously for their voices to be heard, without the backlash of victim blaming. She is also active with public speaking to stop violence against women. She loves spending her down time with her rescue corgi mix, Mia. They go to the dog park, go shopping at Petco, or just play on the farm! She also loves spending time with her family members. Call of duty with her nephew, yoga with her niece, nonstop laughter with her sister and quality talks with her mother are a few of her favorite things. You can find her on Facebook, Twitter (Shelly_Bean89) and Instagram (Michellebrooke89). 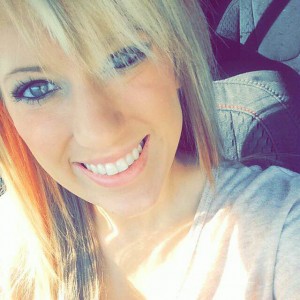 I was raped/sexually assaulted while I was unconscious. I had been talking to the man who did this to me a few months prior to the attack, and had told him that for us to work we would have to take things slow. So, he took matters into his own hands, and took advantage of a situation – while I was passed out from drinking too much he sexually assaulted me.

When I came too, I had this man on top of me, violating me. I was frozen and couldn’t move. I was in shock. Someone I thought I could trust was doing the unthinkable to me and I was terrified. At that moment, I knew that everything I thought I knew of this man was a lie and I had no idea what kind of person he was.

Every scenario flashed through my head, I didn’t know what he would do if I put up a fight and he was twice my size. So I thought, “Maybe if he realises that I am coming too, he will stop.” And that is exactly what he did.

He stumbled off me, and pretended to just be cuddling me. He was not expecting me to come too while he was doing this to me. I played dumb and sick, until he finally offered to take me home. After that I texted him and told him that I knew what he had done, and to stay away from me. He openly admitted to it, and apologised.

Word spread and story after story came up of him doing this and much worse to other girls. So I pressed charges. After that, his frat brothers messed with my car, messed with my apartment, and ran me out of town. I moved to a town where I didn’t know another person and continued to spiral out of control.

After I moved I started drinking every day and refused any help. The court hearings lasted about a year. I took the stand numerous times, where I was made to feel like a whore, like I had asked for it. I was defending myself when I was not the one on trial. Our government spends so much time with the “innocent until proven guilty” thing that they make the victim feel like the guilty one for speaking up. This worsened my depression.

I gained a lot of weight and really didn’t care if I woke up each morning. It took my mother breaking down to me and telling me that her daughter’s rapist had taken her smile away, had taken her daughter away. I knew then that I couldn’t keep doing this to myself and my loved ones. I was slowly killing myself.

So, I started off with baby steps. I read books and listened to music that helped me cope. Then I finally got into counselling. I started blogging about my journey. Every feeling I had and every situation I went through, and without realising it at the time, I had started to inspire others. Other survivors came to me with their stories, in search of their own voices. So I gave them an outlet for one. They wrote out their stories and any feelings they had, in their own words anonymously. They had no one to victim blame them and had a chance to be comfortable.

I would tell them to express what they are feeling. Find a comfortable way, whether it is counselling, through art, writing, or just talking about it with loved ones. I truly believe that getting back your voice after trauma is a huge step in the healing process, it’s what saved me.

Acknowledging that it is happening. Instead of pointing at it and saying “this is what it is and this is what it is doing” our society takes the easy route, and that mostly consists of blaming the victim. Women throughout history have fought countless times to have the same freedom as men do. But once someone takes the one thing that we have fought so hard to get – our voices – the damage that does can be catastrophic. Our laws and our society as a whole should be helping women when they feel lost, not kicking them when they are down.

I support The Pixel Project because you all are striving to raise awareness for women who struggle more than most people will ever realise.