Our fourteenth 2015 Survivor Stories interview is with Kerry Fagiolo from the U.S.A.

My name is Kerry and I am a survivor. I am a mother of two children and am very happily married to my best friend Anthony whom had I found courage through meeting, along with my church. I have been a registered nurse for almost 25 years and worked full time up until the time of my injury. After 22 hours of surgery and years of rehab both mentally & physically, I am ready to educate and help others understand that Domestic Violence does not discriminate. It is an extremely uncomfortable topic for many victims but more so for support people such as family and friends. I got away…but not without battle wounds. 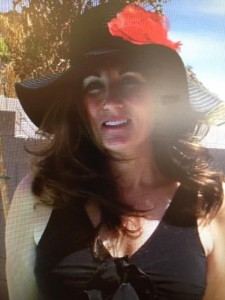 My experience with Domestic Violence included mental, physical, verbal and sexual manipulation and abuse by a male that I had worked with at a hospital for over nine years.

He “took me in” when I was going through a divorce and used my situation as an opportunity to increase his bank account as well as provide him with a live-in babysitter. I was slammed against a shelf in a closet by him and sustained a broken back. This was one of many abusive outbursts by this person during the short time we were together. He was verbally, mentally, sexually and physically abusive to me. He was an opportunist with a history of seeking newly divorced females (per court records).

This relationship finally came to a halt when I moved out of the home and hid in a safe house for six weeks.

I was punched in the face by him directly in front of my daughter and his son, something that had never occurred in front of others. He realised that he made a grave mistake because both kids were able to share the story. When he went to work at six the next morning, I rented a Uhaul, packed up as many of my belongings as I could, and went to a home that he was unaware existed.

I refused to share my whereabouts with him (although he tried for six weeks to follow me and find where I was staying). Ultimately, he found me and the stalking began. There was a great deal of police and legal involvement which finally resulted in his arrest for stalking and breaking a restraining order.

I am still rebuilding my life. The mental scars are deeper than the physical scars. I have Post Traumatic Stress Disorder (PTSD) and night terrors. I have a counsellor that I continue to see. I got very involved in my church and attended a meeting for battered women.

It is very hard to rebuild when most people (family and friends) do not want to speak about it. I think if they were aware/educated more about Domestic Violence they would help me heal more.

I would suggest that any single female who is going to date a man do a background check on them first. If I had done so, I would have seen the long list of restraining orders against him as well as arrest records.

I would also encourage people to listen to their instincts. If it does not seem or feel right, it isn’t.

Lastly, never allow yourself to become isolated from family, friends or work peers. A huge tactic of abusers is isolation.

Educate, educate, educate. Share testimonies of survivors face-to-face with young middle school and high schoolers. I believe that the abusers do not just become abusers – I feel the patterns are there from a young age and can be recognised very early on in life by teachers, parents and friends.

I support The Pixel Project because the more the community is saturated with education and real life stories of struggles and survival, the more aware and proactive in prevention we as a community will become!