Time magazine‘s most recent cover picture is possibly the most eloquent piece of journalism of 2010 and it is fitting that this portrait is one of the clearest illustrations of the global pandemic of violence against women.

Our cover image this week is powerful, shocking and disturbing. It is a portrait of Aisha, a shy 18-year-old Afghan woman who was sentenced by a Taliban commander to have her nose and ears cut off for fleeing her abusive in-laws. Aisha posed for the picture and says she wants the world to see the effect a Taliban resurgence would have on the women of Afghanistan, many of whom have flourished in the past few years. 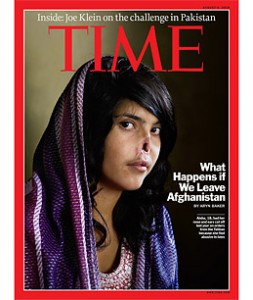 While Mr Stengel explains his decision to run Aisha’s portrait within the context of Time’s commitment to providing a truthful window into the war in Afghanistan, we can also extrapolate a different and more urgent set of messages from Aisha’s portrait:

Aisha’s courage and determination in the face of dangerous odds to share her face with the world highlights the urgency and importance of addressing and ending cultures that perpetuate violence against women, not just in Afghanistan, but around the world in all its forms.

Aisha’s face also offers irrefutable proof that violence against women has very real and damaging consequences for women’s health. It should be seen not just as a socio-economic issue, but also as a preventable global healthcare issue. As Mr Stengel reports, Aisha is currently in an undisclosed location undergoing facial reconstruction courtesy of the Grossman Burn Foundation. This extreme surgical operation is something that she would never have had to undergo had she not been subjected to the horror of having her nose and ears chopped off as punishment for being a woman who fled her abusive in-laws.

Most importantly, Aisha’s portrait is a powerful and visual Teachable Moment that inspires and galvanises all of us to work towards eliminating violence against women wherever we are in the world and with whatever skills and tools we have at hand. Men and women alike need to realise that it is only by working together that we will be able to end violence against women worldwide. It doesn’t matter how small or how major an action is – every action to prevent or stop violence against women and girls is yet another step towards ending it…

Just do it – take action. It all adds up. Together – and only together – can we change things for millions of women worldwide, some of whom live in your neighbourhood, work round the corner from your office or even are part of your family.

After all, if Aisha can find it in her to publicly share her face and her pain to open up a window into the atrocities endured by her Afghan sisters, we can all do our bit to end gender-based violence in our own corner of the world.

Aisha’s courage offers a ray of hope that things can change for the better despite the atrocities women face worldwide. This is what Time magazine photographer Jodi Bieber captures by focusing on Aisha’s beauty and refusing to portray her as a victim when she took Aisha’s portrait:

There are no victims here – only hope and the determination that the world should be galvanised to move forward and act to end violence against women.

And we should all answer Aisha’s call to action, starting NOW.

To read more about Afghan women and the return of the Taliban, go here.

Stuck for ideas on what you can do to contribute to ending violence against women? Check out The Pixel Project’s Community Buzz pages. Possible activities include: