Welcome to Part 1 of our October 2022 Inspirational Interview with Dr Debra Parkinson, social researcher and Executive Director of Gender and Disaster  Australia (GADAus).

Over the past decade, Dr Parkinson has made significant contributions to policy and public perception on increased violence against women in disasters and issues related to gender and emergency management. Her work since the 1980s has included research and advocacy related to women’s health, domestic violence, intimate partner rape, women’s unequal access to financial resources, superannuation, and the legal system. 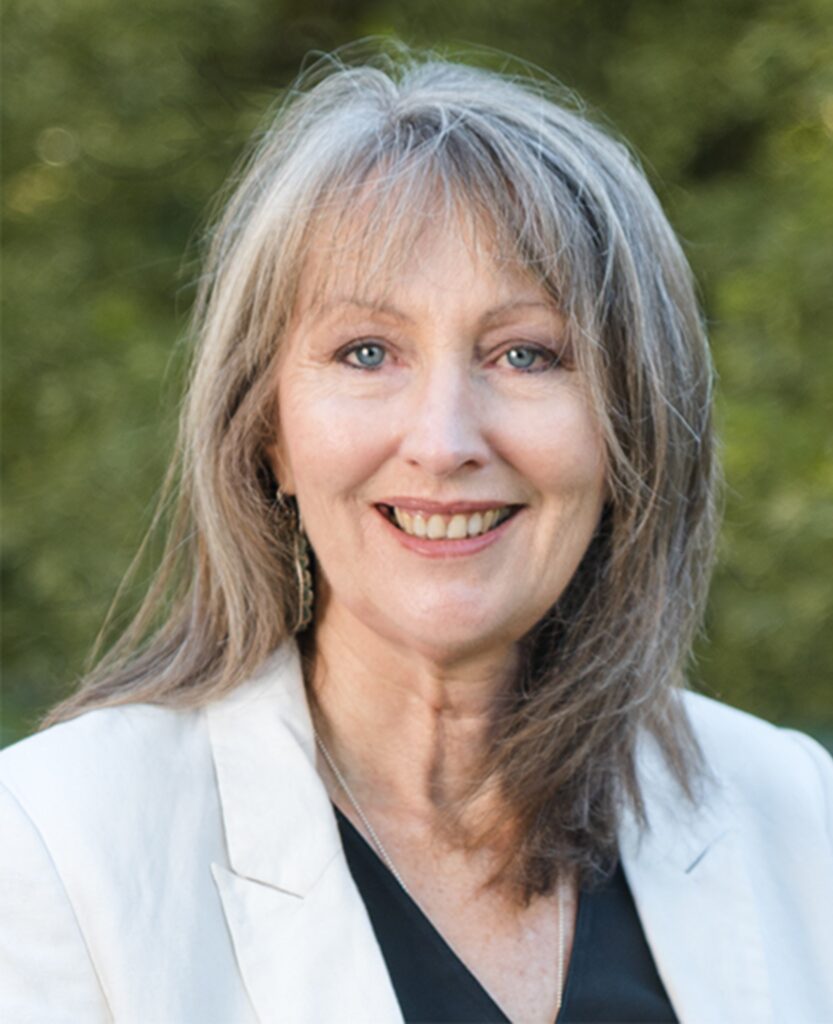 I’m the youngest of five girls and went to a Catholic girls’ school in a rural town in Australia. My last year of school in 1975 was co-ed, and for the first time, I became aware that the world didn’t see me as equal to boys. Before this, I was taught by Brigidine nuns. These women demonstrated ability and expertise and every leading role in the school was filled by a woman. They taught about women in history. Social justice was the core of my education, both at school and at home.

First year university continued by lived experience of the world’s view of women’s inferiority – and the world’s acceptance of violence against women. At a lecture about sexual assault on campus, a criminologist (since jailed for historic sex offences) advised girls not to resist, apparently for their own safety. Even then, I found this strange.

My work in VAW grew through ‘Women’s Access’ roles and decades with women’s health services. There have been so many significant people in this work. Our research has included women leaving violence, partner rape, and women’s unequal access to superannuation and the legal system.

2. Gender and Disaster Australia (GADAus) was established (as the GAD Pod) in 2015 to promote an understanding of the role played by gender in survivor responses to disaster, and to embed these insights into emergency management practice. How did GADAus come to be founded?

The need for our work in gender and disaster emerged in the aftermath of the 2009 Black Saturday bushfires, the deadliest since colonial settlement. I was working at Women’s Health Goulburn North-East and the worst of these fires was in our region.

My (late) colleague, Claire Zara and I interviewed 30 women and 47 workers, who spoke to us of increased violence against women in the aftermath of these bushfires. Coming from the women’s health sector, our work was feminist, and centered women’s experiences. Claire and I reported our findings at three events held for International Women’s Day in 2012, and, shockingly, despite hearing women’s accounts of the violence against them by male partners, audience members’ first question was consistently, ‘But what about the men?’. Our society’s greater valuing of men was never so stark.

Once we turned our attention to men, funders were interested in our research. A partnership was formed with Monash University; subsequent research with men cemented the need for a gender focus. Women’s Health Goulburn North-East, Women’s Health In the North and Monash University Disaster Resilience Initiative then formally partnered to create ‘The GAD Pod’, now Gender and Disaster Australia. A core group of people have consistently worked with me and guided the work, always believing in its potential to create positive change for disaster survivors.

3. Could you give us an overview of GADAus’s approach to VAW as well as the services and programmes that GADAus provides for the victims, survivors, and communities during disaster events in Australia and beyond?

In a nutshell, our approach is that ‘Disaster is no excuse for domestic violence’. Our research documented the ways men’s suffering after the disaster or their ‘heroism’ during the disaster were seen as excusing their violence in the home. Meanwhile, women were asked by police, counsellors and family members to ‘give it some time’ and even to be a ‘better wife’; in short, to sacrifice their right to live without violence for the good of their husbands, families, and community.

Through our research, journal articles, conferences and training, we name the problem of excusing men’s violence in disaster. We raise awareness so that everyone in society, including the emergency sector, understands the dynamics of VAW in disasters and acts to prevent it or respond to it effectively. It is not hard to do. Our postcard gives 4 steps that anyone can do, and a list of referral agencies and helplines. We also have National Gender and Emergency Management Guidelines for the Emergency Sector that includes a simple checklist to put in place before disaster strikes and Lessons in Disaster training to help emergency service organisations embed gender considerations into their policies and practices.

4. One of GADAus’s key initiatives is the Training Hub which contains resources on the understanding of the impact of gender on disaster, and to provide practical strategies to incorporate gender considerations into emergency management policy, planning, decision-making and service delivery. What progress has Training Hub made so far in terms of challenging family violence and building safer communities for women and girls during disaster events?

The Training Hub is one pillar of a comprehensive training focus, developed over a decade. Through the constant effort of our training team and excellent, compelling trainers, it has reached over 1,000 participants from the emergency services sector, local government, women’s health and faith-based organisations, and disaster-affected communities across the country. Our certified trainers are supported through a Practice Leadership Group with seminars four times per year led by our ‘T3’ team. This has been enabled through federal funding received on 1 January 2022.

The progress made in challenging family violence in disasters – not just from the training hub, but from all our work – has been made evident in the past few disastrous years. When we first spoke of VAW in disasters, the very fact of this was denied and we were vilified for offending fire-fighters and causing even more harm to disaster survivors and suffering communities. It is now accepted that VAW increases in disasters.

The notion of insult to men in uniform, however, remains strong. This is the steel core of patriarchy and won’t easily be undone.

5. GADAus’s work is groundbreaking in that there has been very little recognition that large-scale disasters can exacerbate VAW in families and communities. What would your advice be to anti-VAW activists, groups, and organisations in other parts who the world who wish to adopt a similar model for addressing VAW in the event of a major disaster?

My advice to others is to take what is useful from our experience to suit your own context, and to build an enthusiastic, supportive and skilled team to collaborate. It is always valuable to have respected leaders say the things we want people to understand about VAW – especially at times of disaster. Men in uniform, in authority, directing communities are perfectly placed to reiterate the message that ‘Disaster is no excuse for domestic violence’. It can be in media announcements or at community meetings about impending extreme weather events, or post-disaster debriefs, or  community recovery meetings. Community Service Announcements that run all year around can raise consciousness of the harm that comes from stringent gendered expectations.

Submissions to government inquiries that often follow major disasters can remind decision-makers that this issue must be addressed in the course of other planning for disasters. Involve influential people to expand your networks and your impact.

Finally, be courageous in naming the problem. It is an essential first step to change. It can be as simple as our postcard, ‘Disaster is no excuse for domestic violence’. After more than a decade, the postcard is still in print with thousands distributed on request over the years. 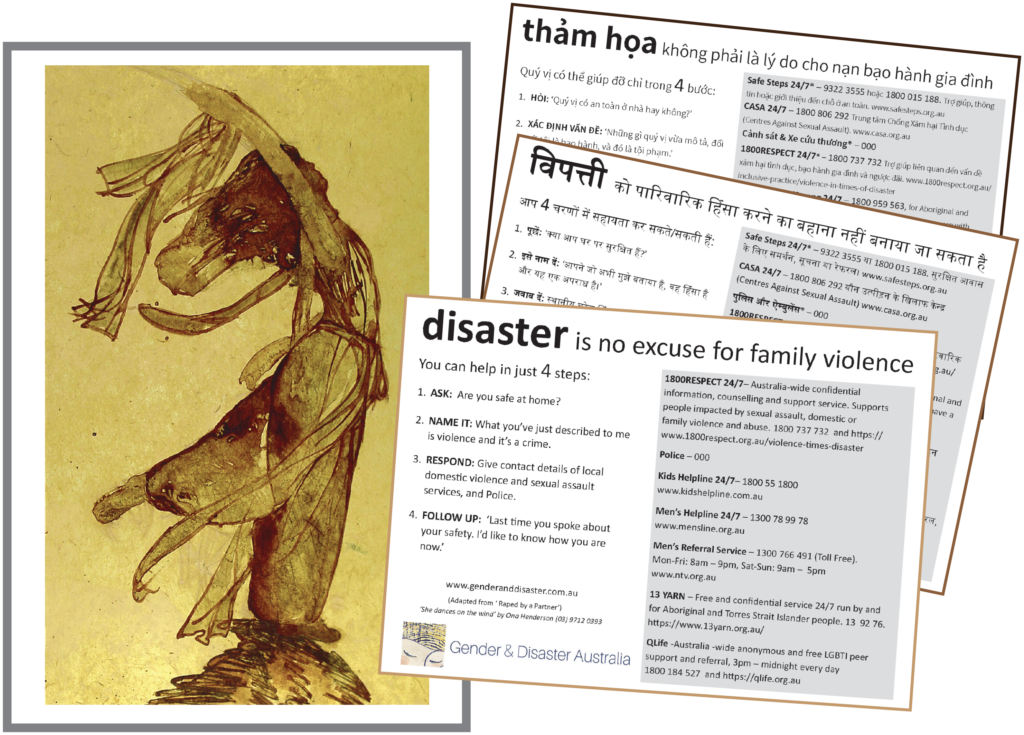