Part one of Brynhildur’s interview posted on 29, October 2017.

All pictures are courtesy of  the Icelandic Women’s Rights Association. 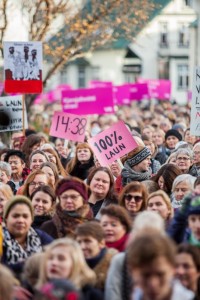 6. What can the average person on the internet do to help stop online violence against women when they come across it?

Men need to stand up, admit that men commit violence against women, and realise that it is up to men themselves to stop this violence. Speak up and be an ally!

8. Tell us about IWRA’s plans for the future. What campaigns, programmes, or projects do you have coming up in the next 5 years?

9. How can The Pixel Project’s supporters engage with and support IWRA’s efforts to stop violence against women?

You can support our efforts to stop violence against women by supporting your local women’s movement. Become active in an organisation in your neighborhood. Women’s shelters and counselling centers for victims of violence are found in most communities and most, if not all, are in need of support. Volunteer your time at a local shelter. Give food, clothing, furniture, serve on the board of directors. And give money! These organisations need your financial support!

Together! We only can end violence by working together, by listening to each other, helping each other, and respecting each other. We need to speak out forcefully against violence of any kind, and we need to teach our children about gender equality and human rights in schools. Most importantly, we need to support the victims of violence, to ensure that survivors have easy access to psychological and legal aid. But we also need to find ways to rehabilitate perpetrators of violence, to incorporate them into society while making sure that they do not re-offend. Violence against women is such a massive social problem that it can only be solved by all of us, together.