Welcome to part one of our Inspirational Interview with Stephanie Harvey, Co-Founder of Misscliks.

A five-time world champion in competitive Counter-Strike, and longtime female pro-gaming icon, Stephanie Harvey currently plays professionally for the all-female team CLG Red. She also worked as a game designer for Ubisoft Montreal, having notably been part of development for Prince of Persia: The Forgotten Sands and Far Cry Primal. Her 16 years in e-Sports as a player and 7 years in the industry as a developer awarded her a Forbes 30 under 30 title in 2014 and one of the BBC 100 women of 2016. She also recently just won Canada’s Smartest Person Season 3 on CBC.

All pictures are courtesy of Stephanie Harvey.

Are you a gamer interested in supporting the cause to end violence against women or do you know gamers who do? Check out our Gaming For Pixels campaign that’s kicking off with our Spring Slam gaming marathon fundraiser for Sexual Assault Awareness Month. 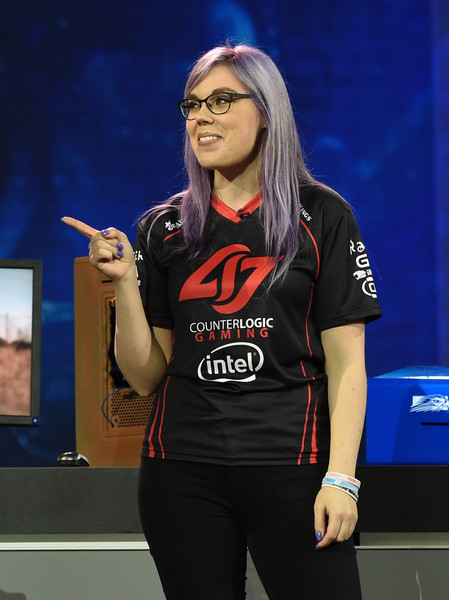 1. You’re one of the top female eSports professionals in the world today as a Counter-Strike: Global Offensive (CS:GO) player with CounterLogic Gaming and you’re also a game developer at Ubisoft Montreal. How did you begin your career in gaming?

I started gaming when I was a little girl. My parents bought me games even before I can remember. I always had a very Balanced Life so it wasn’t until the end of my highschool that I started gaming pretty intensely. I was giving a lot but it was still just for fun. Then Counter-Strike came along and I started getting pretty serious about it around 17 years old. I was going to local tournaments and joined my first team in 2003. I’ve been playing competitively since then.

2. The gaming community has a reputation for being male-dominated and hostile towards women and girls, with a number of women across the industry and community (including players, game designers, writers, artists and engineers) talking about the high level of abuse, harassment, and sexism they have faced at work or while gaming. Has this been your experience and – if it has – how has this affected the way you’ve built your career in eSports and game development?

Yes, it has been my experience. I can’t really quite say how it affected my career because it has always been this way, I don’t know any other way.  What I do know is that I had to be very strong to continue gaming even after all the hate. I also have a very thick skin and never read forums and comments about me to make sure I don’t get affected by it.

I wish it was different. I wish I wouldn’t need to have thick skin. Unfortunately, in the reality that we live in, it is impossible to be  sensitive to harassment to survive in this domain.

3. There are a number of actions that the gaming industry is taking to address the issue of sexism and misogyny and support women in gaming ranging from female-only eSports tournamentsto working on tech-driven solutions to curb online harassment against women and minorities. What additional solutions and steps do you think needs to be taken to effectively tackle sexism and the online harassment of women in gaming?

I believe there is no perfect solution to harassment in gaming but I do believe there are multiple steps that we can do to help. For example, I believe that game companies need to be aware and provide tools for players to protect themselves from harassment. I also believe that online platforms such as Twitter, Twitch or YouTube could do a lot more more to help against harassment on their website.

I also think that just time will help. The new generation of gamers will have as much females as males in the hardcore scene. Right now this generation is raised  knowing that games are for everyone and that this will help create a generation that will not see gaming as a boys club, therefore just help female gaming in general.

4. You’re one of the co-founders of Misscliks, a group of “community leaders committed to using our voices to create a better future: one where people of all genders can participate in geek and gamer culture without fear of prejudice or mistreatment, enjoying acceptance and opportunity.” Where did the idea for Misscliks come from and what galvanised you and your co-founder(s) to found Misscliks?

The idea of Misscliks has always, always been something I wanted to do for so long. Then, I met the perfect girls to make it happen. A couple years ago, I believe online communities were even harsher and we wanted to get together and create a safe environment for people to talk about geek & gaming culture. We created our first Dungeon & Dragons show on Twitch and Misscliks was born.

5. Missclik’s website states that as of now, your current focus is on “recognising the under-representation of women as role models in geek and gaming culture, giving support and exposure to those female role models, and helping to create a culture of authenticity, advocacy, unity, and bravery.” Can you tell us more about Missclik’s approach and what you all are doing to accomplish this aim?

Currently, Misscliks is a platform for female role models and other type of role models, to create the content that they want and to blossom within a respectful community. We also raise awareness on the issues we face and work on solutions make our community better. Misscliks is all voluntary work and we hope to expand our reach and our work to more communities and more platforms.