Our fifth 2016 Survivor Stories interview is with Panayiota Bertzikis from the USA.

Panayiota Bertzikis is a survivor of a brutal rape while serving on active duty in the United States Coast Guard. She founded the Military Rape Crisis Centre in August 2006 while still on Active Duty as a direct response for the lack of support after her rape. It has since grown to be the largest organisation offering direct services to survivors of military sexual trauma. Military Rape Crisis Centre has representatives in almost every state and at U.S military bases overseas and it serves survivors, their family and friends, and professionals. The free and confidential services provided include: medical advocacy, support groups, legal services, case management, community education and professional training. When she is not working to help survivors, Panayiota’s hobbies include yoga, travelling, reading, and spending time with her newborn son and her husband. 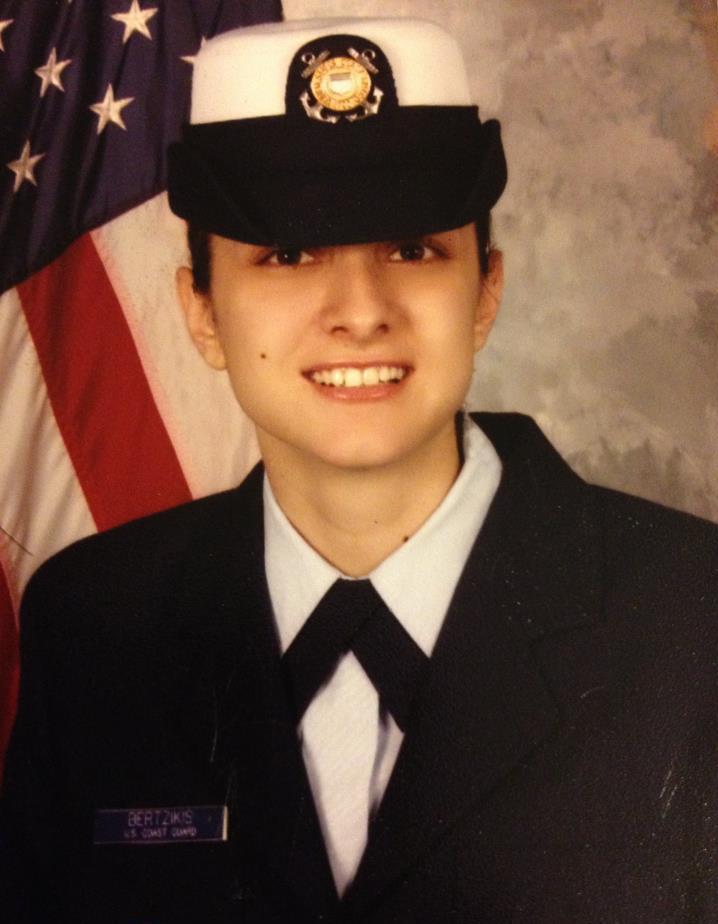 I was brutally raped by a shipmate while serving in the United States Coast Guard in Burlington, Vermont. I reported the rape to my command and instead of getting me the much needed medical treatment they chose to lock me up in a closet while they “investigated” my allegations.

Immediately after the “investigation” I was forced to clean out an attic on base as a “team building exercise” with my rapist. I suffered through 11 months of very severe retaliations, including an attempted sexual assault by friends of my rapists.

I eventually lost my career in the Coast Guard due to being “unable to adjust to being raped”. Despite physical injuries and a confession, my rapist left the service with an Honourable Discharge.

Being in the military, my options were limited; leaving my job would have resulted in my having gone AWOL and risking being sent to prison. Suicide was another option. Instead, I got up each day and reported for duty, knowing full well that I would experience acts of retaliation, victim-blaming, and slut-shaming.

During sexual assault prevention training the Coast Guard boasted about having a ‘zero-tolerance’ policy. At the time I was unaware of the extent of the rape epidemic in the military and held on to (what I now know to be) the false belief that someone within my chain would see what was going on and put an end to the retaliations; that they would live up to their promise that the Coast Guard has zero-tolerance.

Instead, things got considerably worse each and every day. Almost a year after my rape I lost my career because I was told that I “had problems adjusting to being raped”.

While on Active Duty I formed the Military Rape Crisis Centre. After hearing stories from other survivors, I realised that what happened to me was not an isolated incident and that the military has a systematic problem with sexual abuse and how they respond to it. I have since worked with members of the U.S Congress to implement new policies to help other survivors.

Working as an advocate and an activist has helped me so much. Seeing the changes that I was a part of in helping create allowed me to regain my strength and power that my rapist has tried to take away from me. Hearing survivors tell me that I inspired them to find their voice to share their story humbles me.

The military, especially the Coast Guard, still has a long way to go before their response to rape is even acceptable. However, it is no longer a dark secret, in part because of my advocacy work. I hope that no survivor would ever think that how their command responds to their rape is their fault.

Take time to heal. Practice self-care each and every day. For me it is yoga and spending time with my family. No matter how busy my schedule is I always find time to do my yoga practice.

And don’t listen to the negative comments! People are going to blame you, not believe you, or tell you that you deserve it or you were somehow ‘asking for it’. They are wrong! Surround yourself with folks who believe you and validate you.

Educating our youth, especially our boys, is vital in eliminating violence against women. By the time one is of age to enlist in the military or attend college it is too late. Teaching age-appropriate consent and respect starts from an early age—even before a child is old enough to go to school.

As a mother of a son, I would do everything in my power to teach him to respect others and to teach him about consent. I do not want my son to be the reason why a rape was swept under the rug, a survivor was retaliated against, or why a rape occurred. If we as parents all educate our kids, I truly believe we can dramatically reduce the rates of violence against women within one generation.

Violence against women affects everyone. We all know someone that been affected by rape, sexual abuse, sex trafficking, domestic violence, and other forms of gender-based violence. The Pixel Project is doing wonderful work to bring awareness on this issue with hopes that one day women around the world can live a life free of violence.

One thought on “THE SURVIVOR STORIES PROJECT 2016: Panayiota Bertzikis, 34, USA”