Our twenty-ninth Survivor Stories interview is with Christina Blackburn from the U.S.A.

Christina M. Blackburn is the founder of Speranza Human Compassion Project, an early stage, volunteer led collaborative whose mission is to provide innovative solutions to prevent and end violence against women and children. Speranza partners with universities worldwide to research & develop impactful cause related public media and educational training for first responders and professionals in victim services. Christina was the victim of domestic violence seven years ago and is now a pioneer for families in crisis. Her goal is to inspire women to make better life choices through solution driven education and creative awareness campaigns. Domestic violence is 100% preventable. What are we waiting for? Speranza means “HOPE” in Italian. 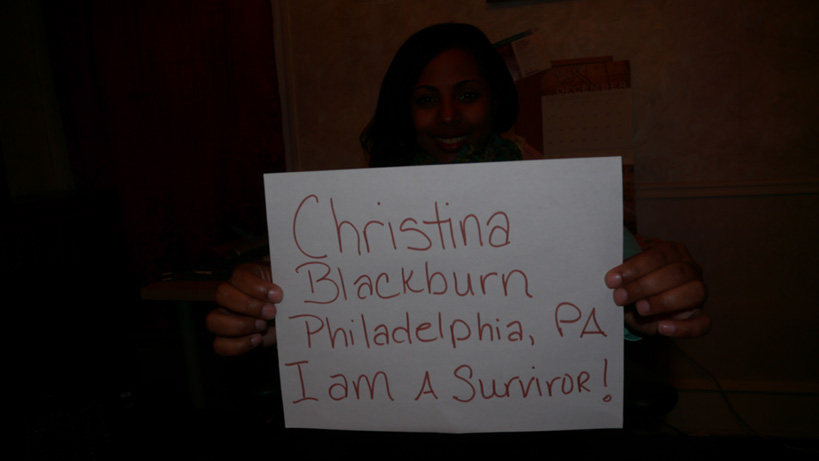 I was the victim of verbal violence and physical assault by my then husband.

One day I woke up and decided this was the end. I was either going to die that day or I would never see him again. If I had to see him it would only be under court order, such as our child support and custody case. I lived, and he has only laid his eyes on me in court and in passing when I drop our children off 4 times a year.

I was so happy when I realised I lived. I did not expect to be that happy as I looked very bad and had no money or place to live. I went to the local shelter that accepted me. My roommate helped me get the assistance needed to leave my abuser successfully. I started examining my past relationships and other cycles of abuse that I allowed and realized I facilitated the problem by not speaking up, allowing the behavior to progress and by not leaving sooner. I started studying Psychology and learning more and more about how the brain works and about mental disorders. I then wrote a book to help women who were being abused and in the process it really helped me and my current boyfriend. I donated 50 copies of my book to the women’s shelter here in Philadelphia. I started a project to educate professionals that work directly with victims on how to provide effective compassionate care. We also empower women through mass media, by teaching them how to problem solve effectively for themselves and their children.

If I could talk to myself back then I would have wanted real dialogue. I wish that I had been told that acting like there is no problem is allowing the problem to continue. Just because you do not know what to do to get out of the relationship, does not mean that you do nothing. You must be aware of what is going on in your home. If it is not a good environment for you it is not good for your children, period. You have to begin making a plan for something more.

Through education and the media. By offering real common-sense solutions to problems women face in relationships and with their self worth. By exposing them to solution-oriented information daily, in the same way we see ads for cancer or autism awareness.

I support the Pixel Project because it goes along with the mission of our project and what we believe in. Having hard conversations and bringing this issue to light through various mediums is important and a good start.