Our fifth Survivor Stories interview of 2019 is with Rebecca McGranahan from the U.S.A.

Rebecca McGranahan is a survivor of domestic abuse, kidnapping, rape and a near fatal assault at the hands of a person she dearly loved. Today, she resides in Los Angeles with her two beloved, very spoiled chihuahuas, very much alive. Last year, she finished her degree in interdisciplinary studies with emphasis on education, political science, psychology and journalism. 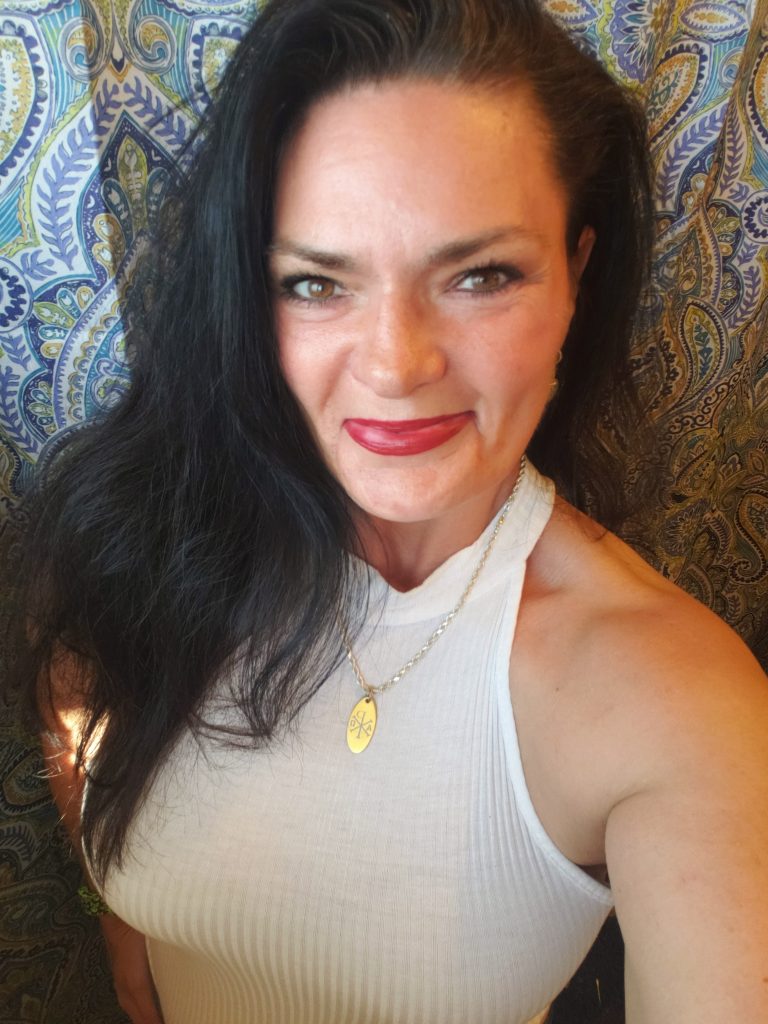 I was dating an amazing man. He showered me with attention, told me I was beautiful and very quickly, professed his love for me. Things were great in the beginning but then he began to change. It started with little things like him telling me when to go to bed, what to wear, what friends I could have, then it progressed to slapping me when another man looked at me and finally he became more violent, beating me whenever he saw fit.

One day things escalated. After holding me hostage in my own home for 9 days, he kidnapped me, beat me bloody and beyond recognition, took me to a warehouse, made me watch him do something unspeakable to another human being, held me at knifepoint, emptied my bank account, punched out nearly all of my teeth, kicked and choked my little dog until he thought she was dead, raped me repeatedly, then held his knife to my throat and began slitting it.

Before he started cutting my throat, he took a break from beating me and walked to the sink to wash my blood from his body and hands. While he had his back turned, I grabbed the wireless house phone, hit 911 and threw the phone under my bed.

The police were already looking for us at that point because someone had caught a glimpse of the knife he was holding in his coat and it was pretty clear that I’d been beaten. As he started cutting my throat, I heard a “BOOM” and the front door came flying across the room. In one second, there were 5 police officers with assault rifles grabbing me by the arm and hurling me outside. They forced him onto the floor, shackled him and took him to jail. In an hour, he was calling me from his cell threatening to kill me if I pressed charges. A police officer heard him and verified what he’d said to me. My husband became so enraged that he put a hit out on me as, unbeknownst to me, he was an important member of a powerful cartel.

There were so many nights that guns came busting through my windows looking for my head so that they could collect the bounty he’d promised. After the third attempt on my life, the FBI put me in witness relocation until the trial. I was so terrified I did not press charges against my abuser despite the heinousness of the crimes against me.

I was only allowed to testify in the preliminary trial because they felt I was in too much danger. I lied my butt off, editing the parts where he hit me so hard and so many times but I was so terrified of him.

The first thing I did was quit answering his phone calls from jail. I walked around in a fog for about 3 years after the trial. I refused to accept medical help aside the obvious or therapy at first because I was humiliated, feeling like I somehow deserved what had happened to me.

I did try therapy after 4 years had passed but I couldn’t talk about everything. It wasn’t until 7 years after my attack that I finally hit rock bottom and tried to commit suicide several times that I managed to find a therapist whom I could connect with.

Therapy saved me. I wasn’t allowed to communicate with my family during my time in witness relocation so I threw myself into getting healthy. I started weight lifting and concentrated on getting healthy and strong. I got so buff that I didn’t feel as much like a victim, more like a survivor. I wrote down all the nightmares I had and went over them with my therapist. Although I slept with the light on for 7 years, my little dog, whom he kicked and choked to what he thought was death, lay beside me every night as I slept. Knowing that we’d both beaten him by living well as he sat in prison was comforting and I was so grateful that we’d both lived to enjoy life after him.

Find someone to talk to, preferably a professional or at least someone who can help you make sense of your feelings. Journal. Write down all of your feelings and trust me, there will be some ugly ones but that’s absolutely fine. Find something to fill your time so you don’t spend it all in your head. Your head can be a horrible place if you let it overwhelm you. Find a hobby, read a self-help book, write a book, make some pottery, whatever. Just fill your time with something you love.

Only hang around positive people. People who lift you up. I was in relocation so I spent a lot of time in online groups talking to other victims but real life friends are better I think.

Don’t hate yourself if you can’t relate to people any more. Abuse changes you and often you’ve been isolated by your abuser. Ease in there slowly. Find your purpose, grab onto it with everything you’ve got and become whatever you want to be.

Above all, love yourself. You are NOT a victim…you are a survivor. Whatever your situation, GET OUT! It might not be today, maybe not tomorrow, if you aren’t safe doing it, but find help, stay safe and get out. There are people everywhere who are willing to help. Fear got the best of me and I felt hopeless. I wish I’d sought therapy sooner than I did.

You are a beautiful, one of a kind individual. NO ONE can replace you. You are precious. You have a purpose here and it isn’t to be abused.

Early education for prevention and firmer laws that provide stricter consequences for abuse. We need to punish the abusers, not the survivors. We need to empower women a lot more in the media and teach self-reliance for women at an early age. We must reshape the way women think about themselves and empower them with knowledge of preventing abuse instead of enduring it. We must teach children that women are equals amongst each other and amongst men. I think the media plays a huge part in the way we view women. Laws need to show that women are not throw-away, sexualised objects to be punished for their very existence. We need to show that violence against women will no longer be tolerated and we ourselves need to value our place on this earth, our endurance, our strength, our beauty and our destinies to become strong, equal and free of abuse.

I support the Pixel Project because it provides information and proof that there is life outside of abuse and that there is hope to be free from it. Our cultures and countries might be different but violence and abuse are worldwide. The Pixel Project provides information and resources to every country, providing a light at the end of the dark tunnel of whatever hell a woman might be going through at the hands of her abuser. The Pixel Project showed me that the boogeyman that plagues us doesn’t have to hide under our bed, hurting, haunting and hunting us. Its resources show us that when we turn on the light there is only a coward hiding in the darkness and by shining a light on abuse, we might all be free from the monster under our beds.