Welcome to part two of our Inspirational Interview with Karin Alfredsson, a journalist, author and activist from Sweden.

Karin’s engagement in the cause of violence against women began in 1979, when she published the first book about violence against women in Sweden. She has worked on many journalistic projects covering the issue. In 2012, Karin launched the international Cause of Death: Woman project, covering different aspects of VAW in 10 countries. From 2012 to 2015, she was based in Lusaka, Zambia, working as the regional director for the Swedish development support organisation We Effect. Karin has also written five crime novels about violence against women in different parts of the world and was recognised by the Swedish Crime Literature Academy several times. In September 2017, her new novel, “Scream Quietly, or the Neighbours Will Hear,” is set to be released. In this part of the interview, Karin discusses how journalists can engage in efforts to end violence against women.

Pictures are courtesy of Karin Alfredsson.

You can read part one of her interview here. 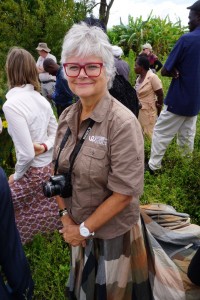 6. You are the author of five novels and several nonfiction books, which all address the issue of VAW. You also have a new novel, “Scream Quietly, or the Neighbours Will Hear,” coming out this fall, which continues this tradition. How do you think fiction and storytelling can support the cause to end violence against women?

Fiction is perhaps the best way to reach readers who never would voluntarily choose to read a nonfiction book about VAW.

In my crime novels, I have tried to be as close to reality as possible. On the front page in all the novels, one can read, “Everything important in this story is true. Every similarity to reality is totally intentional.” My crimes are examples of violence that happen to women in the world every day: physical, mental and sexual violence, “honour” attacks, sex-selective abortions, prostitution, trafficking, anti-abortion legislation, forced marriage, dowry deaths, rape as a weapon in war….

When my readers are eager to know how the story will end, they get a lot of factual information about the situation for women in the world. The stories in my books have so far been based in Zambia, Vietnam, Poland, India, Dubai and Pakistan. In the novel coming this fall, I am returning to Zambia.

7. Aside from your work as an author and journalist, from 2012 to 2015 you have also worked as the Southern Africa regional director for We Effect, a Swedish development support organisation that has gender equality as one of its focus areas. Can you tell us about your work with We Effect and how it intersects with your general work to eradicate VAW?

In southern Africa, VAW is a widespread problem that has to be fought on all levels in society. Land and property is often, according to tradition, owned by men. This means that a widow runs the risk of getting thrown out of her home if her husband dies or if she gets divorced. Young girls are forced into marriage far too early and have to leave school. Rape is seldom reported. To be battered is considered a natural part of marriage. In some countries, legislation has been improved, but traditions and village court systems are what really matter. It is important to approach local leaders and explain why VAW is a threat against development.

8. What advice would you give to journalists who are just starting out and are keen to use their skills to help stop VAW?

Listen and learn. Meet women who are survivors and people who are working against VAW, researchers and professionals. You have to understand the mechanisms, preferably even what makes men violent, to understand the structures and be able to explain what is happening.

Avoid the sensational headlines and try to get behind the scenes. Use the right words. Never talk about “family tragedy” or “flat quarrel.” Call a spade a spade, i.e. violence violence, rape rape, control control, and murder murder.

9. How can The Pixel Project’s supporters engage with and support journalists like yourself who work to shine a light on the issue of violence against women?

By encouraging and supporting women who are thinking about talking to media. Look for good journalists and communicate with them to give them ideas and tips. When you see bad work, when the reporter has used wrong words or not understood facts, get in touch with him/her and explain your view nice and politely to avoid creating defense reactions. These issues are quite hard to cover, and most journalists are eager to do their job well.

It is a matter of gender equality. The day men start to respect women, our choices and right to live our own lives, then things will start to happen. This means that we will have to start with the small boys. Legislation is fine, but if we are not working to change attitudes, very little will happen.