Dan Hassler is a nuclear control room operator for PSE&G Nuclear and the father of four. A recent college graduate, Daniel dedicates his time to being a good example to his daughter and three sons who range in age from 4 to 12 years old. Although he does shift work to provide for his family, Daniel makes a point of actively participating in his children’s lives through daily interaction with them in their chosen activities and through school functions and various activities at home, including construction projects, gardening, four-wheeling, and sports. 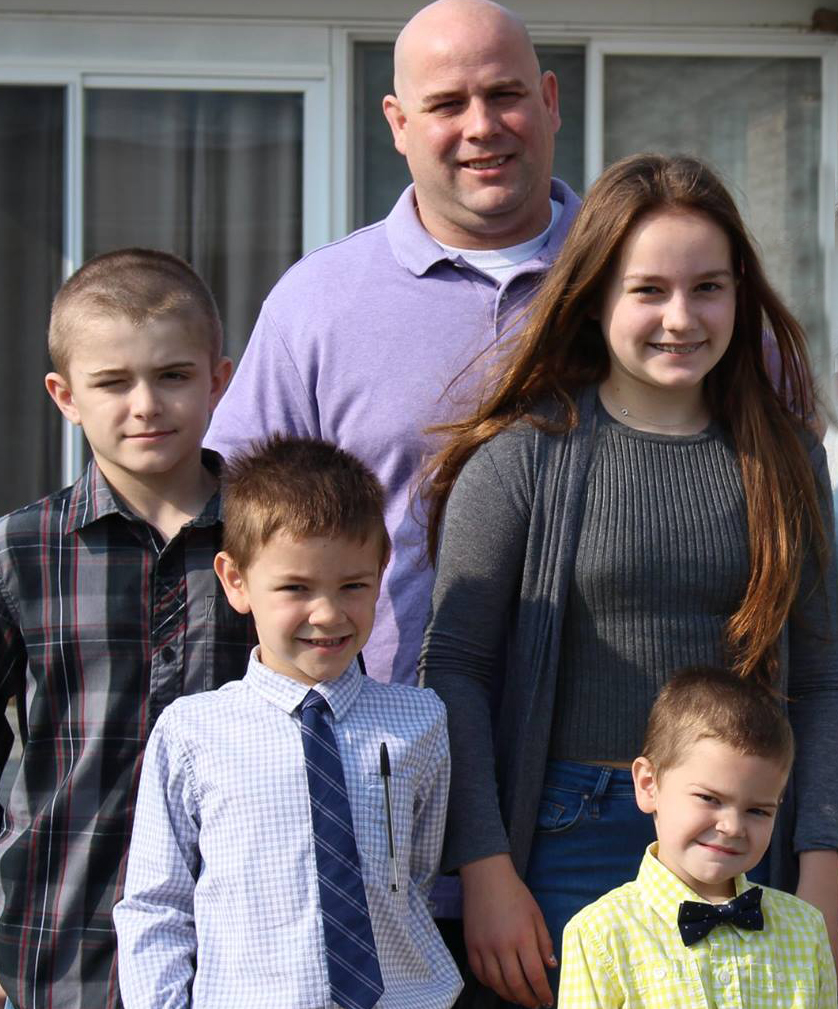 The standard answer, naturally, is that I enjoy seeing my kids grow – emotionally, physically, etc.

My greatest joy though, is being able to make them each burst into uncontrollable giggles in a way that no one else can. Kids being kids, they have the tendency to get sad or grumpy and being able to pull them out of that by doing silly things makes even the worst day at work feel like a small object in a rearview mirror in comparison.

My dad was very much an “old school” gentleman. I could tell very early on that he revered women, beginning with his mother. He taught us – through his actions – to be respectful by doing little things like opening doors and following genuine guidelines that revolved around putting women first and foremost. He and his brothers catered to my grandmother in a very attentive and loving way. They passed along those same expectations to their sons and nephews, encouraging us to show utmost respect to our mothers, sisters, cousins, wives and friends.

Times have changed since I was a boy. Still, while my household may be slightly different than the one that I grew up in, the expectations for treating women with respect and dignity are very much the same.

This month (June 2016), there was a very lenient ruling in a high profile sexual assault case in the USA.* As part of his character reference, the defendant’s father penned a letter to the judge urging him to withhold harsh punishment because his son had only 20 minutes of bad decision-making in 20 years of his life.

I believe this line of thinking is a prime example of where we have gone wrong in ending violence. As a father, it is my responsibility to teach my sons (and my daughter) right and wrong. In addition, they need to know that there are consequences for their actions. Having little to no consequences for violence against women implies that these simply aren’t real crimes. Accountability is an anomaly, unfortunately, and I’d love to see it make a grand comeback.

To that end, if I never become an activist, I can at least start to spread awareness organically in my home and in my community. I can do that by opening doors, offering my seat, and petitioning for higher wages and harsher punishments for violence against women in a way that makes it clear that women are every bit our equal.

*Editor’s Note: This is in reference to the Brock Turner case where ex-Stanford University student and rapist Brock Turner was only sentenced to 6 months in prison for raping an unconscious woman behind a dumpster despite two eyewitnesses testifying against Turner, the jury convicting him of 3 counts of sexual assault, and the victim’s sister testifying that he also attempted to force himself on her earlier the same evening.