Our twentieth 2015 Survivor Stories interview is with Sandra Pickens from the U.S.A.

Sandra D. Pickens, M.S. is the author of “Summer Internship,” her debut publication. Sandra is a huge proponent with working with the Native American community in creating awareness of domestic violence and sexual assault issues, Her dream is to open her own transitional women’s facility for survivors of domestic violence and mentally ill single women. After her ordeal and relocation, she went on to continue her education. She joined E.Y.E.S. – an organisation at East Central University, Ada, Oklahoma, that assisted students who were going through domestic violence, partner violence and sexual assault. She was also invited to share her story on a panel with the Department of Justice and was interviewed by Native Times newspaper in 2013. Sandra earned her Master’s in Human Services and graduate honors sash from her tribe, the Chickasaw Nation. In 2010, she did a PSA regarding domestic violence that was to be shown during a presentation by President Obama. She is single, happy, member of the Las Vegas Dream Center/ICLV church and living in Las Vegas, Nevada. 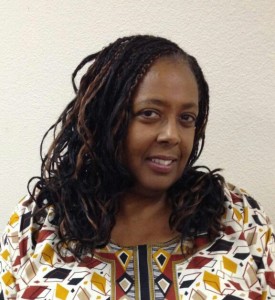 I come from a background of generational domestic violence and sexual abuse. My ‘picker’ was off in my 20’s and 30’s; always choosing the wrong men. I did not love these men, but I wanted a sense of belonging and put up with the abuse until I would snap and I decided to leave before I end up committing murder.

The very last time I was involved in a relationship and domestic violence was in 2005. I was at a truck stop in Phoenix, Arizona and my abuser had left me there for 90 minutes to go be with a prostitute or do drugs. He came back and cursed me and insulted me and I got fed up. He did not like my tone and pulled out a pistol and put it to my head. I told him to pull the trigger because I am tired. I turned my back to him and walked away.

That was the longest walk of my life.

That moment I walked away was the moment that changed my life forever. I took a year to make some major decisions in my life. I did not get any counselling, but I turned to my higher power – my God – to help me deal and heal.

On March 7, 2007, I arrived in Oklahoma and started working on Sandra. I spent the next five years not getting involved in serious relationships but learning how to be with myself and enjoy my company and realise that I deserve more in my life from someone else.

I would share that you can do bad by yourself. No one can satisfy you, but yourself. Before you can enjoy life, you need to learn to enjoy the company of yourself. You do not have to put up with someone talking and treating you like trash. Learn to be your own woman and take care of you first!

If it is generational violence, we need to deal with the abusers to get them out of that mindset that it is okay to hit women. We need to educate our young girls and women that they do not have depend on another person to take care of them and that if someone says they are pretty, that does not necessarily mean that he likes them.

If this organisation can change at least one life, this is the greatest organisation. Women need to see that they are not going through their situations alone.