Our eleventh Survivor Stories interview is with Tracy Grinstead-Everly from the U.S.A.

TRIGGER WARNING: The first 2 segments of this interview may be triggering for some survivors of rape.

Tracy Grinstead-Everly is a survivor of teen dating violence, which included physical assault, sexual assault, and stalking. She has worked to end violence against women for over 23 years, starting as a community activist and hotline advocate. She received her law degree in 1995 and spent years representing victims of family violence to help them achieve safety and self-sufficiency. She currently works as a public policy manager, developing and training on laws which maximise victim safety and offender accountability. She has published several articles and developed best practices on family violence, with particular focuses on protective orders and firearms. 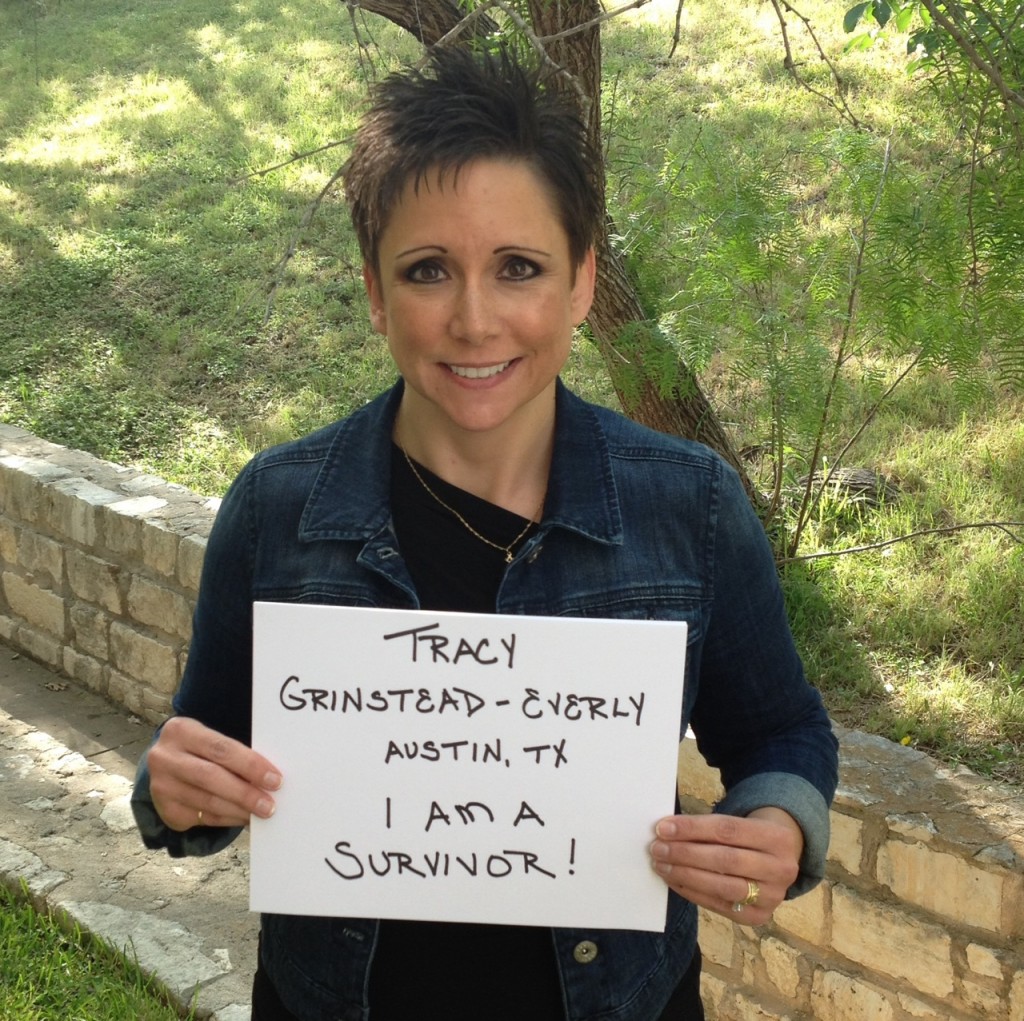 Before I began dating, I had no concept of healthy relationships. I was raised to think that any man was better than no man at all. I entered by first serious relationship as a senior in high school. My boyfriend almost immediately became jealous of any time I spent with anyone other than him. To avoid conflict, I soon became isolated from my friends. The relationship progressed to emotional abuse, but I was convinced that I was lucky to have him. On the night of a major high school event he raped me. I did not know what to expect, so I did not know the emotional and physical pain I felt was not normal. I did not know to use that word. The subsequent times we had sex were often against my will. I ended up with frequent bruises on my hips and a torn labia. My blood and tears were always met with apologies. He told me he couldn’t help himself. He told me I was beautiful. He told me that he loved me. I believed him.

As my high school graduation approached, I contemplated the idea that I would be away from him. At first the very thought frightened me, but I began to think about how the distance would affect me. I decided that a woman who could negotiate her own scholarship to college, who decided to be brave enough to go where she knew no one, could maybe live on her own. I broke off the relationship. The abuse became physical and in public. My friends who did not believe me about the abuse saw it with their own eyes. My attempt to seek a protection order failed. I left for college, and he stalked me my entire freshman year. I refused to take his phone calls, slept somewhere else when he came to find me. I learned that I was resourceful and strong. I lived without him, and was the better for it.

After I finally escaped my abusive ex-boyfriend, I obtained counselling. As my therapy progressed, I said the words out loud. I had been raped. I had been beaten. I had been stalked. I sought a higher power. I had been taught that God punishes the wicked and makes bad things happen to bad people. I could not figure out what I had done that was so bad as to have deserved what I had survived. I spoke with religious leaders of all faiths, attended various houses of worship, read and studied and tried to find an answer. One evening I drove 30 miles to attend services at a Reform Jewish Temple. The rabbi’s sermon was essentially this: “This week’s Torah portion is the Ten Commandments. What can I say that has not already been said? Of all of the Commandments, I say there are three that above all else we must follow: Take no other Gods before me. Do not murder. And do not rape. These are things that can never be taken back, that break the very soul.” As I said “Amen,” I knew that I had found my place in the world, and have practiced Judaism ever since.

Believe in yourself. Even if what you think in your heart defies everything you have been taught, trust yourself. Do not give in to negative messages you receive from family, friends, society and those who claim they love you but hurt you nonetheless. Once you think about leaving, know that there is hope. There are people who want to help you, you just haven’t met them yet. If you return to your abuser, do not feel guilty or like you failed. You know your situation better than anyone else. Do what you need to do to stay safe and know that you can always reach out again. Know that you deserve to be happy and healthy and safe. Once you finally escape – and I know you can – seek out others. Trust that you are not alone. We believe you and we believe in you. Others have made it and so can you. You are stronger than you know.

Our best hope for the future is to acknowledge and learn from not only the past, but the present. If we do not recognise and name the problem, it will continue to grow, silently and fatally. Our society protects institutional violence against women. We need to demand that victims be supported in their efforts to be safe and that offenders be held accountable. Our culture must be revamped, through a change of attitudes and beliefs of society and individuals. Yet, it is not enough to blame the system without offering ideas of change. We must look to our society’s leaders– from parents to politicians – to demonstrate zero tolerance of how women are mistreated and to serve as role models through their public and private actions. People must be taught that respecting women is an outward reflection of respecting themselves. It is never too early or too late to learn and change. Public awareness and cultural conviction to end violence against women must be instilled at all ages and aspects of society.

It is critical to give a name and voice to individual survivors of domestic violence, rape and other crimes against women. The staggering numbers of victims can be overwhelming or seem exaggerated, and be too easily dismissed. I support The Pixel Project because they run projects and initiatives like the Survivor Story Blog Interview Project that shows that every statistic is built on a real woman with a unique story. I think it is long overdue for victims of these crimes to be given a forum in which to share their experiences. It is more than educational, it is empowering.

One thought on “THE SURVIVORS STORIES PROJECT: Tracy Grinstead-Everly, 44, USA”