Our third Survivor Stories interview is with Laura Barnett from Canada.

I am a 46-year-old mom of a teenage son. I was born and raised in Ontario, Canada, and growing up I was the typical girl-next-door. My father worked and my mother stayed home with myself and my brothers. I was a Girl Guide, took piano lessons, spent summers at the cottage and wrote in my diary. I was the neighbourhood babysitter who pursued the teenage dream and worked at the mall. Currently I am a production assistant for a small graphic design and signage company. I worked for several years in the transportation industry as a safety and compliance and hiring coordinator, and worked in customer service for many years before that. My love for learning has seen me return to college a few times, studying human resources, occupational health and safety and most recently, medical administration. 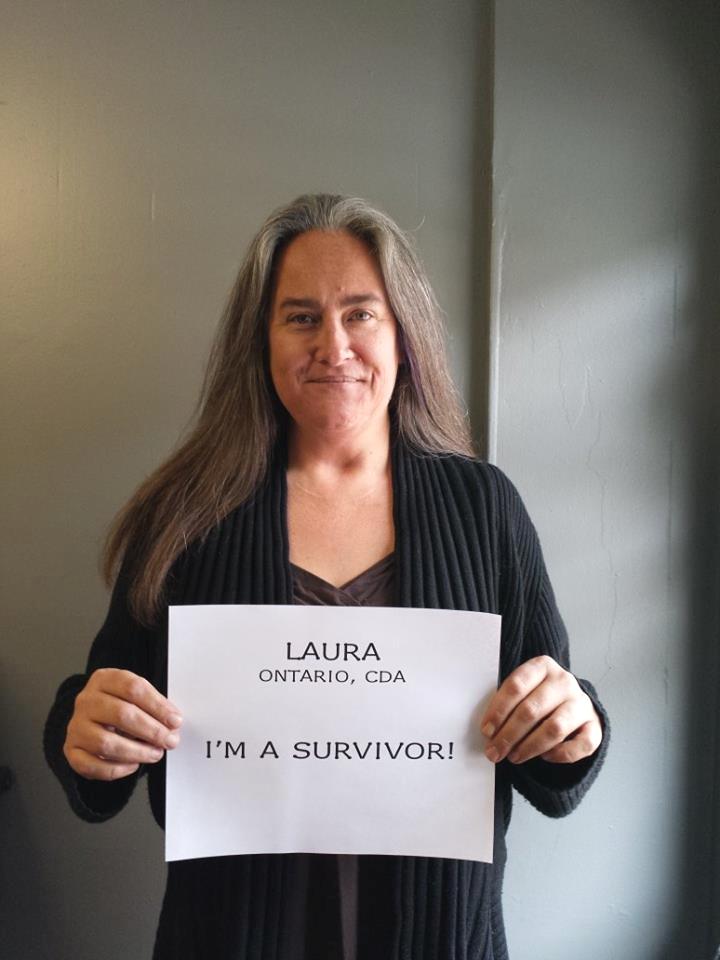 I fell in love, finished high school, attended college and got married in my early 20’s. That chapter ended amicably a few years later and life continued on. I eventually met another man and within two months, I was expecting our only child together. And during what was supposed to be one of the happiest times in my life, it so quickly became the opposite. I lived with domestic violence for 12 years. During that time I experienced verbal and psychological abuse, as well as marital rape. I was never physically assaulted. The destruction of my personal property (family heirlooms, photographs, life’s little mementos) added to the mental abuse as I quite literally watched ‘life before him’ be erased. I was completely isolated from all of my friends and most of my family. I blamed all of it on myself because I simply could not wrap my head around the fact that someone who claimed to love me would treat me this way. Clearly, I was imagining everything. The shame and embarrassment that I was feeling kept me silent.

It took years and multiple times of leaving and returning before I finally left for good. I had planned my departure for months, ensuring that my son and I had a safe place to live that kept us in his school district and close to his friends. I contacted my local women’s shelter for counselling support and informed my new landlord and neighbour of the situation I was leaving. Finally the day came and I faced my fear, swallowed the lump in my throat and tore off the bandage. That was 5 years ago. I never looked back. Not even for a glimpse.

I came out of my closet. I hid this from so many people for so many years until I finally realised that the very thing that was keeping me in that closet was the same thing that was going to let me out of it. So I started talking about it and continue to do so. This is the second project I have participated in with The Pixel Project, the first being sending a statement picture to be included in one of their music video PSAs for the “30 Artistes, 30 Songs, 30 Days” campaign. That was a pivotal moment in my healing….extremely empowering and liberating! I got in touch with old friends and embraced the love of my family, a support system that I had been separated from for far too long. But most of all, I forgave myself and in doing so, got over the pain and moved on.

Silence hides violence. Talk to someone. Sometimes we are able to put things in perspective and start to move forward simply by saying things out loud. This doesn’t necessarily have to be someone close to you, just someone who you feel safe and comfortable with and who will respect your privacy and honour confidentiality (crisis hotline, family physician, clergy member). Don’t play the shame and blame game with yourself, because you didn’t cause this to happen. Accountability lies with the perpetrator.

As the mother of a teenage boy, I am so thankful for men’s initiatives in ending VAW. Positive male role models are so important in helping young men ‘define their masculinity’ without abusing or degrading girls and women. The fight to end VAW must include men, because ultimately this is not just a ‘woman’s issue’ it is a human rights issue. Continued education and building awareness are paramount.

The Pixel Project understands the power of social media and uses it in such a positive way. They have partnered with so many like-minded individuals who, through their songs, photos and words provide support and encouragement to victims and survivors. In turn, their talents are being seen and enjoyed by people who may never have discovered them otherwise. Proof that everyone wins when we work together!