Our second Survivor Stories interview is with Ashley Sapp from the U.S.A.

Ashley Sapp is a writer and wannabe editor from South Carolina. She is a language and literature enthusiast as well as an activist in the cause to end violence against women. She is also a survivor of rape and volunteers in her local community as well as with The Pixel Project. Her blog (chaosandwords.com) caters to the creative side of her brain, and she can also be found on twitter at @chaosandwords. 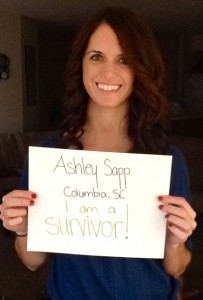 When I was 16, I attended a party where I was drugged and then raped. Because I was there with friends, I never thought twice that anything of that nature could happen to me. I am from a small town, and you simply didn’t hear much about gender-based violence… but that obviously didn’t mean it doesn’t happen. Afterwards, it took me a while to acknowledge what happened and even longer to not blame myself for it.

It was a one-time occurrence, and I didn’t get the chance to escape. It was partly like an out-of-body experience, where I was aware of what was happening to me but helpless to stop it.

For a long time, I didn’t heal. It was easier to pretend it never happened, to ignore it completely. However, I began to understand that even though I wasn’t dealing with the aftermath, I was suffering. I was depressed, anxious, and felt incredibly guilty as though it was somehow my fault. When I went to college and was surrounded by new faces in a new town, I finally went to therapy where I was also diagnosed with PTSD. I started writing about what happened, how I felt and thought about it, and began volunteering. I wanted other women to know they weren’t alone, that they have a voice and deserve to be heard. I wanted to help fight back.

Never let anyone or anything diminish your self-worth. These experiences do become part of you, true, but they do not define you. You are a survivor; believe that. Also, it is okay to not feel okay. You are not weak for it, but instead, when you are self-aware of your emotions, you can better help yourself through them. Remember that you are not alone and that there are resources and people out there who understand what you are going through. You WILL come out on the other side, and whatever has happened to you is not your fault. Though there are those who choose not to believe this sort of violence exists, the truth is in plain sight. You do not have to feel ashamed about the situations you are/were in, and you do not have to hide. You do have a voice, and no one can take that away from you. Every day is a new beginning, and sometimes it takes quite a few of them before you begin feeling whole again. Don’t lose hope in the possibility – it will keep you going.

Awareness and knowledge are key, so I think sharing facts, news, and resources is a great place to start. In doing so, we keep the discussion going and we can keep pushing the world to recognize how common violence against women is and that we can work to end it. Every individual who lends his/her voice to the cause helps move the cause forward, so I think enforcing the notion that we are not powerless is also important.

I support The Pixel Project because I believe in its cause – as a survivor, as a woman, as a human. The endless focus and energy on bringing an end to violence against women is dear to me because of my own experience that I share with thousands of others. It has given me strength, given me a way to fight back, given me hope that it is possible to turn things around.