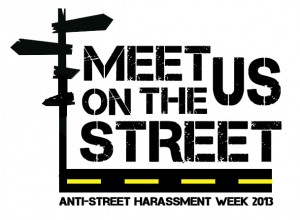 The Pixel Project is proud to contribute to and support International Anti-Street Harassment Week (7 – 14 April 2013) by featuring the best anti-street harassment stories throughout the week. These stories have been kindly collated by our partner Stop Street Harassment to showcase how street harassment happens and the measures various women have taken to stop and prevent it. We hope that this series gives you some great ideas for how to prevent, stop and intervene in street harassment in your communities.

The fourth story comes from Lauren Bravo, by day, Senior Writer for Channel 4 Food and columnist for the Worthing Herald series. By night, London-lover, glutton and grump.

Editors Note: This is cross-posted with permission from the blog Lauren Bravo is My Real Name. Her bystander intervention technique was simple but effective and it started off by checking in to see if the person wanted help so it was not dis-empowering. Her tactic is one that any one of us can do. So keep that in mind when you witness harassment and you’re not sure what to do. Pull the fake friend card and step on in!

I did a good deed the other week. On the scale between replacing the loo roll when you’ve finished it and pulling a child out of the way of a speeding bus shouting “Little Jimmy, nooooo!” then I’ll concede it’s closer to the Andrex end, but still, I felt proud.

My deed was this: I saw a woman, on a busy Euston Road at 6pm, being hounded by a man. He wasn’t being outwardly aggressive, but he was sliming round her like a slug in an overcoat, asking questions and ignoring all clear signals (headphones in, one-word answers, refusal to make eye contact) that she wasn’t interested.

I caught the girl’s eye and mouthed, “Are you ok?” to which she shook her head. So then I had a decision to make, quickly. To barge in like the Green Cross Code Man and say, “STOP, letch! She doesn’t want to talk to you. RETREAT,” before blasting him with a sonic ray gun, or the alternative; pretend to be her mate. “There you are!” I cried, launching myself on her (for if I’m going to do a good deed I may as well get a hug out of it). “Hi!” she faked, as I dragged her away. Then we stood together on the pavement miming friendly chat like a couple of am-dram actors, while Slug Man stared, lingered, and eventually slithered off back to his cabbage patch.

She was pretty grateful, or at least acted like she was. “I always attract the weirdos too,” I told her, in what I thought at the time was a reassuring manner. Then I disappeared off into the night, swishing my imaginary cape and feeling proud.

Why don’t more people do this? Seriously? There must have been 20 people within view and earshot standing nearby, yet nobody else paid the slightest attention. I assume for the same reasons more strangers don’t tell you when you have food on your face – because we are all really hermit crabs, and unprecedented human contact is more often than not a big ol’ faff.

There’s the worry that you’re going to get ‘involved in something’, of course, and I can appreciate that. But nobody’s saying you have to leap in with your handbag swinging. Even a stern glance or a calm, disapproving presence could help. A well-timed ‘tut’ might still go some way to helping these lowlifes learn that harassing us for the simple crime of possessing ovaries is Not Ok.

So let’s make this a new thing – street harassment crusaders! Operation Creep-Be-Gone! Bolshy builders, drunk leerers at bus stops, creepy guys who hang around asking you your name at train stations – all beware! For before you know it, a Fake Friend might leap out of the shadows and stop you in your tracks. Who’s with me?