Welcome to part two of our Inspirational Interview with Johanna Crawford of Web of Benefit. In this part, Johanna shares examples of how Web of Benefit has helped women, the impact of the “pay it forward” model, and her thoughts on what it means to empower women. 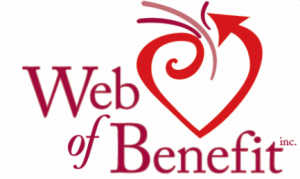 7. It must be very rewarding to see former victims become empowered, self-assured women. Can you give us some examples of recent success stories?

Imagine Mary, a well educated mother, brought to a foreign county, who does not speak the language and has been so violently beaten around the head that her lack of short term memory keeps her from learning English. She has a young son who hates her for taking him away from his rich father and putting him in public housing thousands of miles from his home and his friends. He does not understand or care about his mother’s struggles or that she lives in fear that her husband will find them and kill them.

Imagine also that there is no agency in Boston to help her with the transportation costs to get her to her Basic English classes or that she has no one to advocate for her. She is alone with no support, trying to live on $250/month with a teenage son. The free English classes are her only hope of getting a job and moving out of the housing project where her son is bullied and beaten. They are too frightened to go out after dark. Fast forward five years! Now imagine Mary speaking English, living in a new apartment in Cambridge, and happily working at a large hospital in Boston. Her son is a sophomore at a large university. Mary is realising her dreams and is even planning to go back to school to study math. Multiply this story more than 1,100 times, and you have my biggest dream, bigger than even I could dream!

There is also the story of a woman who needed immediate financial help to avoid eviction that day. She had been promised funds by another agency and they did not come, so she was on the verge of being kicked out of her apartment and having her five children, with whom she had just been reunited, placed back in foster care. We had everything done and the funds delivered by 5:00 PM the same day.

Or there is the case of the young woman in Cambridge who needed $1,175 for translation of her transcript and to pay for an academic writing class at Harvard. She was living in public housing on less than $300 per month. Web of Benefit could only help with some of the money, but she saved the rest. She is now in a PhD program, all expenses paid!

8. I understand you have a philosophy within your organisation called “Pay it forward.” How does it work?

Our organisation has been created with the philosophy that each survivor assisted will be part of the “web of benefit.” She will adhere to the “pay it forward” philosophy by doing three good works on whatever level she is able for three other women in need, increasing our impact exponentially. Web of Benefit, Inc. creates a network of trust and a sense of community in which each woman feels safe and finds the support needed to achieve financial independence to reach her highest potential, and break the intergenerational cycle of domestic violence.

9. If a woman reading this interview today needed your assistance, what should she do?

Unfortunately, at this time, we only have funding to help survivors in Boston and Chicago/Cook County. If someone reading this is in either of those areas, they should go on our website, www.webofbenefit.org and apply for the Self-Sufficiency Grant. She will need to have a DV advocate to refer her and to be part of the process. If she does not have a domestic violence advocate she can call me, at 617-285-1900, and I will refer her to an advocate. Every survivor of domestic violence, no matter where they are located, should have an advocate to assist them in all the different areas of their lives. That is what they are there to do. Advocates know all the local resources and will help with housing, health care, schools, and childcare and have access to many other resources as well.

10. How do you think we can eliminate violence against women in our communities?

I believe that we need to remind or teach every woman, through support groups, counseling, mentoring or any other ways possible, that she deserves the best and does not need to be subservient to an abusive partner because she has the power to create the life of her dreams. I also believe these beliefs need to be taught to little girls very early in life by both her mother and her father.

When I created Web of Benefit I believed that I would be working with women whose self-esteem had been damaged by abuse. Self-esteem, I believe, is the personal value that we think we have and the way we look at ourselves in the world. I soon discovered that these wonderfully brave women not only did not believe that they had any value; they did not believe they deserved to have a place in the world. I learned that worthiness or the belief in their own self-worth was what needed to be revived in these broken spirits. If a woman does not believe that she deserves the best, there is no way she can dream of a better life or define the specific steps and goals to create it. It is my core belief that we all deserve the life of our dreams just because we walk on this planet and because we are all given the ability to dream.

Empowerment is a word that is overused and has not been defined in a way that is meaningful to me. To give power is what is defined in most dictionaries, but what does that really mean? I have come to realise that to empower a woman includes not only helping her realise that she has the ability to create the life she wants, but more importantly, that she has the power to change the world by helping others. That is the power we all have and need to use to create a better world. Gandhi said: “You must be the change you wish to see in the world.”