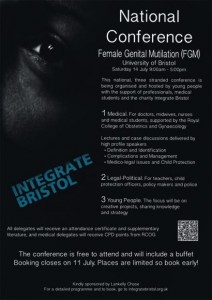 The Pixel Project’s UK-based interviewer and writer Angelique Mulholland recently attended the National Conference on Female Genital Mutilation (FGM) at Bristol University that was held on Saturday 14th July and organised by “Integrate Bristol”. Here is her report on some of the highlights of the Conference as well as what grassroots activists and groups are doing in the Bristol area to combat FGM.

For those of you who are not familiar with what FGM means, it stands for Female Genital Mutilation. FGM is common in many parts of Africa and is also found in some countries in the middle East. It involves young girls having their clitorises and labia removed, and in some cases their vaginas are sown up. The “social function” is often cited as keeping a young girl ‘pure’ or stopping her from “becoming promiscuous.” Many girls are pre-pubesent when the procedure happens but also some girls are subjected to FGM in their teens.

The physical, emotional and psychological effects of FGM are dramatic and long term. FGM is not to be confused with “circumcision”. FGM is a dangerous, illegal procedure which to the victim causes on-going suffering. To name but a few life long complications; bladder problems, complications in child birth, lack of sensation and enjoyment from sex, loss of motivation, feelings of depression and low self esteem, lack of libido and loss of dignity.

In the UK, FGM has been illegal since 1986. An estimated 24,000 young girls are at risk of the practise in the UK every year, (Home office stats) yet there has never been a conviction under the 2003 FGM act.

Bristol, in the South West of England, where the conference took place, has a large Somali community (circa 10,000). The rate of FGM in Somalia is 95%. Many young girls in the UK are at risk of this practise if they belong to this community. Girls are often flown back to Somalia in the summer holidays, where they are subjected to the procedure by relatives. Parents not only consent but are often are the instigators of these young girls having the procedure done to them.

The conference has shown some innovative projects and efforts going on in the Bristol area to raise awareness and fight against FGM. Here are just two of them:

Silent Scream is a short film created by 27 young women from schools in the Bristol area. In partnership with Integrate Bristol and Zed Productions, the young girls created the film to encourage families within their communicate to say no to practise of FGM. Despite opposition, criticism and pressure from members from within their own communities, the young girls bravely pushed ahead with their film making project. The story evinces the difficult and complex family dynamics often involved with FGM, for example with one parent being against the procedure taking place. The film shows that despite their vulnerable position, young girls within communities are starting to stand up and say no to FGM. They are trying to protect their younger sisters from having the same fate as them.

You can watch the trailer of the film here (NOTE: For some survivors, this may contain triggering visuals):

Another impressive project involves Claire Smith who is the Head Teacher of St Werburgh’s Primary School in Bristol. Before she became Head Teacher, she was the PSHE (Personal, Social and Health Education) lead in her school. She became aware of the problem of FGM within the local community and when she became Head of the school, she decided to tackle the problem on a practical level.

After doing research Ms. Smith found out that many families who wanted to subject their child to FGM would take their child to their home country either side of the summer holidays. She made a new school policy that every child would need to be in school throughout the academic year. If a child needed to be out of school during term time, the parents would have to seek express permission from the school. If she felt unsure about the child’s safety, she would refuse for the child to be taken out of school during term time.

In addition, if Ms. Smith felt there was a risk of the child being subjected to FGM during the summer transition to Secondary School, she always informs the school of this and asks the Secondary School to be cautious.

It’s difficult to tell the concrete results of this policy, as FGM takes place in secret. However, Ms. Smith feels she is sending a very strong warning to anyone who is thinking of subjecting a child to this practise- it will not be tolerated.

She said: “My job is about safeguarding children. And that is what I’m doing. ”

We will be publishing our interview with Claire Smith as part of our monthly Inspirational Interview series on Sunday 26 August 2012.

One thought on “Event Report: The National Conference on Female Genital Mutilation (FGM) at Bristol University”