In a nutshell, I’m a creative generalist, geek, gamer, gardener, husband and father of two adorable children (my son Matteo and my daughter Elena), and uncle to several nieces and nephews. Professionally, I’m a product and graphic designer currently working in the architectural door hardware industry creating and maintaining technical documentation. There’s not much more to say, I don’t find myself to be very complicated person – though I’ve been told otherwise. 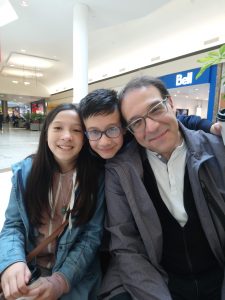 That’s a rather difficult question to answer, what’s not to love about being a dad? There’s the tantrum management, lunch-making, playing, homework verification, life-lessons, and so on.

However if I had to boil it to a single feeling, to the first thing that pops into my head, I’d say, “Being able to watch your children grow into their distinctive selves – for better or for worse.”

Mediterranean fathers (in my experience) are never close to their sons. My dad, my brother and I are no exception; we talk and converse, but we’re not close by any stretch.

That doesn’t mean I didn’t learn anything – in fact I learned a lot through observation. My dad and my other father figures (grand-fathers, teachers, and scout leaders) showed me, through their actions, that respect and politeness are paramount regardless of gender, social status, colour or creed. It’s something I’ve tried to follow with varying levels of success throughout my life.

There’s no question that it is a human right’s issue, that men and our society/culture at large are (in large part) responsible for the situation and are also the keys to correcting the situation. I believe the best way fathers and other male role models can do this is through example, by calling it out, by actually caring.

Granted, I’m biased in that opinion because that’s what worked for me, but I know my children; they do learn from observing those around them, they’ll emulate you. So if you treat people with respect – regardless of colour, status, gender or creed – then there’s a good chance they will too.