Mark Shainblum, daddy of Maya (age 9), was born and raised in Montreal and now lives in Ottawa with Maya and her mommy Andrea. Mark is a science fiction and comic book writer and created the comic book series NORTHGUARD with artist Gabriel Morrissette, currently being revived by Chapterhouse Comics. He also recently co-edited the science fiction anthology SUPERHERO UNIVERSE: TESSERACTS NINETEEN. Being Maya’s dad has been a joyous, stupendous, terrifying, joyful, laughter-and-tears filled upside down roller-coaster ride. Maya has been totally her own person since the day she was born. She’s smarter than most adults three times her age, brooks no fools, loves life with gusto and goes for what she wants and damn the torpedoes. Mark, a self-described feminist for his whole adult life, struggles daily to really walk the walk and not just talk the talk. Some days are better than others, but he keeps trying. And Maya just keeps being herself, which is what it’s all about. Mark’s website is www.shainblum.com 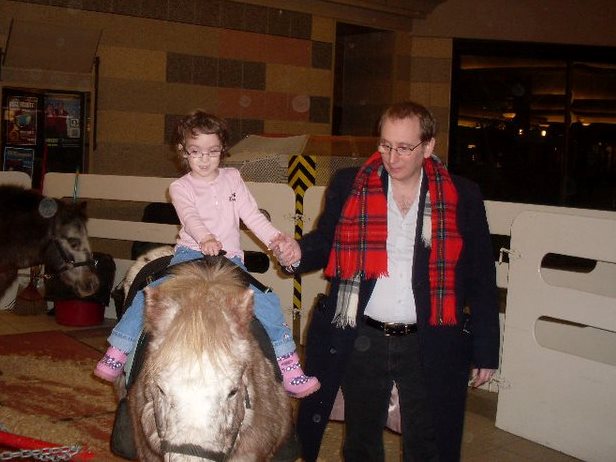 As I am typing this, my daughter Maya is reading me excerpts from a classic Calvin and Hobbes comic strip collection and giggling hysterically.

I love her brains and her vocabulary, and her sophisticated sense of humour. But what I really love is the fact that she feels free to identify with Calvin, the mischievous, in-everyone’s-face, super-creative, non-conformist lead character. I love that it never occurs to her that she needs to be more “ladylike” than Calvin, or that she needs to “dumb-down” in front of friends or family, or that loving things like superheroes and robots is in any way incompatible with loving cute birdies and fuzzy stuffed animals. I love that she is who she is and seems totally at ease with that.

My father walked the walk long before it was fashionable to do so, and his influence on me and my older sister was profound. He was present in the delivery room for both of our births in the early 1960s, long before this became common practice, or even generally acceptable. He had to sneak in, wearing a surgical mask, because the common wisdom was that husbands would faint and make more work for the nurses.

He treated my mother, his own mother, and all the other women in his life as respected equals. He accepted as normative that they’d have career and artistic ambitions of their own. In his job as the director of HR for a major hospital he went out of his way to hire women – in particular, women from visible minority groups – to positions that few others were willing to give them in the 1960s and 70s.

In his every word and deed he made it clear that women were equals and he fully expected his daughter to be her own person and follow her own path just as much as I would.

Violence against women is utterly unacceptable no matter how you define it, and fathers have not only a “role to play” but a moral responsibility to model respectful, egalitarian behaviour to their daughters and sons alike.

Their daughters need to see and hear their fathers reaffirm their individuality and importance as themselves, with or without a partner.

Sons need the same lesson, but they also need help unlearning the old assumptions, and unexpecting the old expectations that women are there for them, instead of with them. That, I believe, is where a lot of domestic violence against women has its roots. More, boys and young men need to feel free to step up and confront misogyny and violence against women when they perceive it.