My name is Sean and my wife Jing and I are currently running an online toy shop called SJ Toys Zone. I am a father of one son and one daughter, and as both Jing and I have no relatives or family members here in Australia, so our small family means a lot to us. Sometimes juggling between business and family can be quite challenging, but I still enjoy it. After a long day’s work, seeing both kids running to me when I get home is the best thing ever. 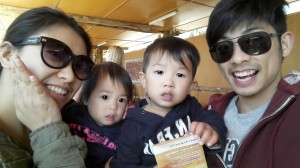 I think the best thing being a dad is being successful in building and growing my own small family. To see my kids growing up -from birth to first steps to seeing them pick up their first word – and being part of their life’s journey is an amazing experience.

My dad has always treated my mum with respect, that’s for sure. I have never seen my dad used any violence against my mum, so this sort of thing was never in my environment while I was growing up so it was never an issue in our family.

I think in most cases violence against women happens within marriage, so I will talk about domestic violence. Trying to prevent the violence won’t be easy – we have to find the root problems and fix it. Digging deeper to solve the root issue is important, and learning how to love and how to build up a marriage is a life-long journey that needs attention and is definitely worth the effort.

In general, I believe that just saying “stop being violent against women” is not good enough to stop domestic violence. As husbands, we should love our wives and be willing to sacrifice for them, like Christ for the church. Love is patient and kind. With sufficient love, we will have more patience to communicate better, and this is very important in preventing us from taking extreme actions during relationship conflicts.