My name is Harry Wu and I am from Melbourne, Australia. My daughter was born in January this year. Her name is Zoey Wu and she is our first child. It has been the most wonderful experience so far as a dad. During the day I work as an auditor for the State Government and after I come home from work, I am a full-time dad. No matter how my day went, Zoey’s smile always makes everything better. 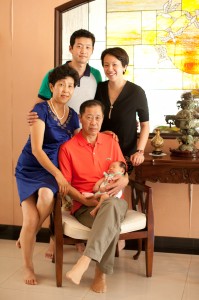 “Changing diapers!”, says no one ever…

I think the best part of being a dad is really about growing with your child. It is extremely rewarding seeing your child grow, especially during those early days. They seem to change every single day. Each day as they grow, as a parent myself, I grow too. I have learnt to become more patient. This is especially true when my daughter cries for no reason and I am not able to soothe her. My time management skills have improved as well. You also become a more caring person in general because you always think about what’s best for your kid and this increased caring will also manifest in your attitude towards others.

My father has been a really good role model and a good influence over how I treat women. Since I was young My dad has always been very respectful of my mother. He has always showed his caring side especially when my mum needs him.

I still remember the one time my mum had a surgery and was staying in the hospital. My dad only finishes work late at night and still wanted to visit her, even though it was way past the visiting hour. We still went to the hospital and begged the security to let us in.

My dad doesn’t have the best temper in the world and we all know it’s common to have disagreements between husband and wife. Even then, he would never be violent or abusive and they would find their own ways to solve any conflicts respectfully.

Awareness is a key factor in ensuring our young men and boys understand the implications and the role they play in stopping violence against women. Childhood is a good time to reinforce these positive actions as their ability to understand other people’s experiences and feelings begin developing at this young tender age. I believe that as parents we are the ultimate role models for our children. Take my father as an example: he has often reminded me to ‘be nice’ to my mum but those words would be meaningless if he did not lead by example.