I am a proud first time Dad to my baby daughter, Iris. She is three months old and she is great. I love football and I can’t wait to take her for a kickabout at the park when she is older. I am an animator working in the games industry, currently working on a PS4 game. I am Irish but have been living in the UK for ten years. I live in the Midlands with my wife, our daughter and our two cats. 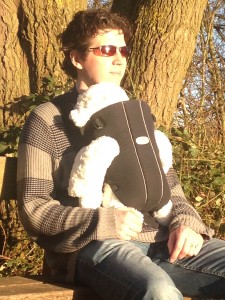 The amount of love you feel for your child. The first time they smile at you is incredible. It also adds a new dimension to your relationship with your partner. You have a new respect for each other and it’s interesting to see how well you can work together as a team.

My parents have an equal partnership and treat each other with respect and that has influenced how I treat people. I’m finding it hard to give specific examples for this question but my parents have always made decisions together and they split work around the house fairly.

I think men need to not remain silent if someone is, for example, talking in a derogatory way about women.

Men also need to lead by example and get involved: They can set a good example to their children by doing their share of domestic chores. They can encourage their children to play games and build interests in things that are not traditionally assigned to their gender.

Violence against women can only be stopped if everyone takes the issue seriously.