Jamie Rishikof is a clinical psychologist in private practice in the suburbs of Boston. He has owned and operated his own practice since 2006. He specialises in working with kids, teens, and parents. Jamie married Dianne (nee Scheinberg) in 2004. He became a dad in 2008 with the birth of his son, Carter, who was followed 3 years later by a daughter, Madison. Connecting with kids is an essential part of Jamie’s life and passion, and he brings that sensibility to his parenting. His children challenge him to be a better parent, and provide him with irreplaceable moments of sheer joy and wonder. 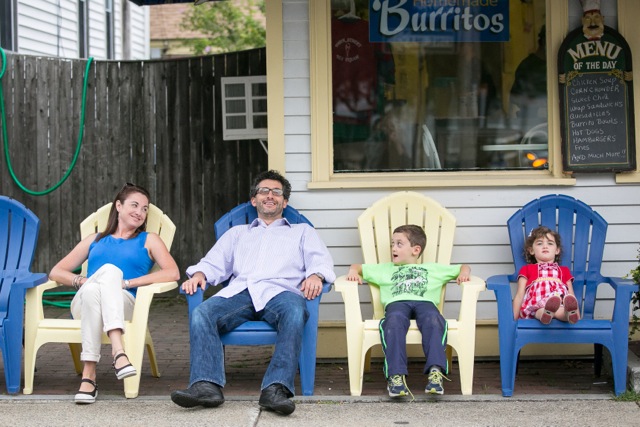 The best thing about being a dad is the mixture of emotions that comes from watching them each evolving into the person that they become. I have deeply loved them at each stage of development. In some ways, each is still the same person that they were a few years ago, with defining traits continuing and elaborating; but they are each also so different than they were just a couple of months ago, with a more distinct sense of personality. I can look back at that evolution and see a path from who they were to who they are. Yet, at the same time, they continue to surprise me. I love it as both of them continue to shake up my expectations of them. I find them to be continually charming, funny, and interesting people. While I carry some responsibility for trying to raise them well, I know so much more of that comes from their own nature, and so I feel quite fortunate and grateful.

My father and I have a pretty solid relationship. We share a lot of sensibilities and traits, and I know a lot of my best and worst traits echo from him. In many ways we walk similar paths, as we wrestle with similar demons and strive toward similar ideals. My parents have a pretty impressive marriage. When I was growing up, I did not understand that, because that was normal for me. But I see now that my mother was pretty outspoken and assertive for a woman of her generation. The fact that my father married her and respected her as much as he does says a lot about his treatment of women. The fact that I have such high regard for the outspoken and assertive women in my life (including the one that my wife and I are raising) says a lot about what I learned from him about gender dynamics.

I think there are a lot of ways that fathers and male role models carry a heavy responsibility for curbing violence against women. Obviously, not being violent towards women or condoning violence against women is important; but I think it is the subtler elements that are more challenging. Any adult relationship involves some power dynamics, some conflict, some resentment, and some plain old arguments. Moments like these are a recipe for men sending unfortunate messages to the boys who are watching. No one is at their best and most mindful when they are angry or resentful. As difficult as it may be sometimes, men need to remain cognizant of not take advantage of physical intimidation or other power manipulations when they are arguing with women. Such behavior sends a message to younger boys that when you are angry, might still makes right and it is ok to intimidate your way to make your point.