Our twenty-eighth 2015 Survivor Stories interview is with Beth Taylor from USA.

TRIGGER WARNING: The second Q&As in this interview may be distressing for some Domestic Violence survivors.

Beth Taylor is currently the Executive Director at Domestic Violence and Rape Crisis Center of Scotland County. Passionately driven by her own experiences as a survivor of domestic violence, she began volunteering with another agency about five years ago, and within three years, she worked her way into her current position. In 2013, she was one of 20 women who were chosen by Pearls for Creative Healing (in Charlotte, NC) to share their stories in a powerful photo gallery exhibit. Beth is very active in her community getting the word out about the work they do at their agency. When she isn’t speaking, teaching, training, fundraising or writing grants, Beth is a member of the Triple Toe Cloggers Adult Dance Group and, along with her husband and daughter, takes Tae Kwon Do classes twice per week. She also volunteers with Richmond County Animal Advocates in Rockingham, NC, where she and her husband currently reside. 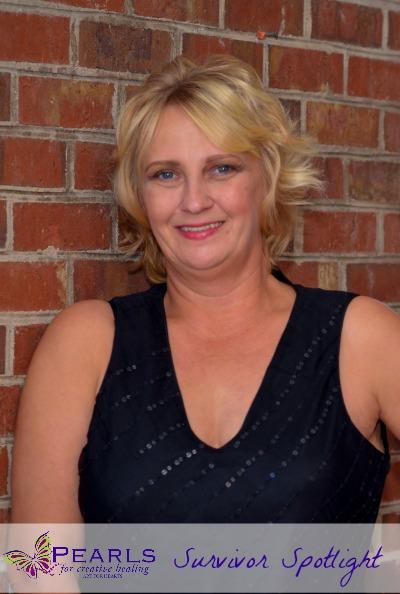 I am a two-time survivor of domestic violence at the hands of men who professed to love me. The last one nearly killed me.

It still took me eight years after leaving that situation to really feel like I had healed and truly survived it. My self-esteem was still in the dirt, so I made my own “barriers” to rebuilding. It was not until I began to work in the advocacy field that I realised that I was also a victim of sexual abuse. Through school, training, and counselling, I have also acknowledged that aspect of my abuse.

I left the first abuser twice before finally being free from him.

The second one was much more dangerous when I was trying to make a plan to leave. My best friend, who was also my boss at the time, simply came into the house the morning after the final attack and got me and my stuff and took us to her house. If she had not gotten me out of there when she did, I have no doubt I would have been killed, likely within that same week. We had been together for over two years, and the abuse had escalated to a level of violence that came with no warning; he had gotten to a point where he was beating me in my face, and would laugh when I would beg him to stop. Death was not far from me, and I will always believe that my friend saved my life that day.

I ended up having to leave my job because he would not stop coming up there and calling and harassing me. I had not wanted to involve the police, but they ended up arresting him after an incident where he came on my job and started destroying store displays because I would not talk to him.

My overall healing and rebuilding did not begin until a few years later, when I relocated to North Carolina to make a new start, away from old acquaintances and bad decisions. It came to a point where I had to make a change for myself and stop getting involved with men who clearly did not have my best interest at heart. Finding myself again was paramount, and finally realising that I was worth way more than I had allowed myself to ever believe.

When a woman/girl realises that she is in an abusive relationship, she should let someone know; call a hotline, tell a friend. It is essential that she plan for her safety, as we know it is unlikely that a victim will leave after the first violent incident. Statistically, a woman has been battered/struck 30 times before she ever tells anyone or considers leaving the situation or seeks any kind of help, or even tells anyone.

After escape, the best piece of advice that I normally share with my clients is to spend at LEAST one year by yourself following an abusive relationship, and do not allow yourself to enter into a new intimate relationship. One thing you have to do after escaping an abusive relationship is to re-establish your autonomy and set your standards, as well as learning your real value instead of relying on anyone else’s opinion of what you should or shouldn’t accept. The hardest thing to regain is your self-esteem, and it’s even harder when you do not take that crucial time to heal from within.

By getting involved, and letting our communities know that this is unacceptable. I believe strongly that if there was an outcry from non-violent MEN who will stand up and say “You can’t do this to women”, that would send a strong message to abusive men, and let survivors know that they are standing up for us.

We also need to be having conversations with our local, state, and federal governments and putting on the pressure to have more stringent punishments for those who perpetrate violence against women.

I support The Pixel Project and their Survivor Stories Blog Interview campaign because I believe that it is of utmost importance for those of us who are active in the movement to make sure that people/supporters don’t become desensitised of the words “domestic violence”, “sexual assault”, “rape”, “violence against women”, or any of the many monikers that we have societally assigned to the atrocities that are committed against victims of these crimes. The best and most effective way to do that is to put the faces of real life survivors out there when we talk about it. When you put a name and a face to it, it’s much harder to turn your back on.