Our twenty-fourth 2015 Survivor Stories interview is with Britt Haak from the U.S.A.

TRIGGER WARNING: The first two Q&As in this interview may be distressing for some Sexual Assault survivors.

Britt is a social worker currently working as a mental health and substance abuse counsellor for adolescents in the Seattle area. Britt keeps busy by also coaching volleyball, performing in The Vagina Monologues to promote awareness and fundraising for local domestic violence agencies, and joining various local volunteer projects when there’s spare time. Outside of volunteering and working Britt is often exploring the Pacific Northwest with her dog or creating something usually by knitting, painting, or writing and hopes to one day turn her hobbies into something bigger. Britt’s greatest passion is helping sexual assault survivors on their journeys through recovery. 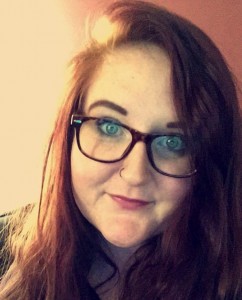 I was molested at age 5, date raped at 18, and raped at 20. The molestation occurred by another child whom I considered a cousin as our families were close. My attacker was found guilty and convicted for the crime. At 18, I was at a party and was the only person not drinking alcohol and I no recollection of the assault, only the marks of an assault occurring; I was a virgin. At 20 I was raped by someone I knew from high school, I was held down and forced to stay after the attack.

When I was molested I tried escaping but was unsuccessful until my parents called me up from the basement, I was forced to stay in a makeshift bedroom in the basement by my attacker. At 18, I began to get sick and my attacker left me. At 20, I waited until he fell asleep so I could make my escape. Once he started to snore I gently removed his arm from holding me down and sprinted towards the door and to my car.

The molestation wrecked my life. I had severe PTSD symptoms and suddenly felt like my eyes were open to all the bad in the world. The more pain I saw in the world, the more I felt compelled to change it. I knew then I wanted to help others who had experienced trauma.

By high school I knew I wanted to be a counsellor and began volunteering and researching as much as I could to learn more about how to help others. By college I was thoroughly committed to helping others and began working towards degrees that would allow me to do so. I also began speaking to friends and family about the attacks. I found my voice and I felt empowered.

I moved to the other side of the country to serve in AmeriCorps and there I found freedom, peace, and confidence. I felt free from my past, peace from the PTSD symptoms, and confidence that I can help others and work towards making changes so that those who have experienced trauma do not have to feel ashamed, broken, or worthless due to what someone else has done to them.

I now have my Masters in Social Work and have extensive experience and training in trauma informed care.

To find your voice and the life within you to keep going each day. What was done to you is not your fault. It is your abuser’s shame – their brokenness, and their feelings of being powerless and worthless. You did not ask for this and you do not have to let their shortcomings be your own. It is a tough journey and for each person it is different. However, you are not alone.

I believe that rape culture exists and that its pervasiveness is the cause for gender-based violence, therefore to end this violence we must end rape culture. As difficult as it is, survivors need to speak out and get involved in changing our society, policies, and laws. Women need to stop blaming other women and instead stand in solidarity and support.