We continue our inspirational interview with Julie S. Lalonde, Canadian feminist, writer, educator, activist. In this part of the interview, she discusses the importance of street harasment activism, the impact of online harassment and starting a Hollaback chapter in Canada

You can read Part I of her interview here. 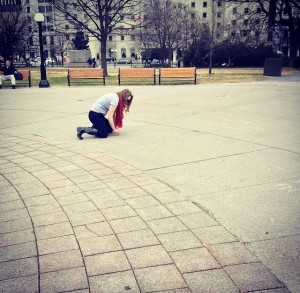 6. As a prominent feminist and women’s human rights advocate, you have experienced online sexual harassment and bullying. You have commented in the past that you have to fight this every day. Please tell us about your experiences and how you feel we can positively combat cyber bullying and gender based hate speech.

As a feminist who is very active in the public eye, through social media and mainstream media coverage, I deal with online harassment on a fairly regular basis. It varies from being told that I need to “calm down” about sexism to outright threats of violence. I have chosen to be transparent about the harassment I experience because I think that “don’t feed the trolls” is a much more controversial approach than many want to believe. I think we set up this false dichotomy where you’re either being “played” by online harassers or ignoring them completely. I think there is a third option, which is the exposing of them. I refuse to be silent about the threats I receive. In calling out the reality of being a feminist online, I feel like I can get a measure of power back.

I also think it is important to talk about your experiences of being harassed online because online harassment is notoriously minimized by social media platforms, the justice system and society at large. We have this cognitive dissonance where we consider access to the internet essential in some cases but the second you talk about your experiences of being harassed online, you are told to just “go offline” and “walk away” because it is “just the internet”. I do not think that argument flies in the 21st century but it certainly does not help activists like me who do 90% of their work offline. I am not difficult to find. I am routinely in the mainstream media and hosting offline events with community organisations. I can not simply brush off threats I receive online because it is entirely possible that those people will seek me out to follow through on their threats. What happened in California is proof that what happens online does matter offline.

In 2011, I founded one of the first Hollaback! chapters in Canada. Street harassment is a reality in Canada, like every other country around the world, but Canada has a few unique features that make it difficult to tackle. First of all, Canadians pride themselves on being very polite. If your entire persona is that you are “nice”, it can be difficult to raise awareness about an issue that folks just do not believe happens here. Secondly, most of Canada experiences long stretches of freezing weather. Because people believe that street harassment is a reflection of how women are dressed, folks find it hard to believe that harassment happens in the dead of winter when we are wrapped up from head to toe in winter gear. But it does!

The very existence of our chapter was a pretty revolutionary thing for many people. We experienced a lot of backlash when we first launched because people could not believe that Canada’s quiet, conservative and rather boring Capital city would have high levels of street harassment. And yet, as soon as women and queer folks learned about our work and our platform for elevating their voices, the stories started pouring in. We’re so grateful that our community trusts us to share their stories and we have taken that privilege to lobby for safer public transit, safer schools and safer walks home. I’m really proud to be a part of the Hollaback! network because it’s a truly amazing group of badass activists from around the world who are working on the ground to challenge one of the most pervasive forms of gender-based violence that remains one of the least legislated against.

8. You are a multi-award winning activist and you are clearly committed to the women you work with. What are both the most rewarding and challenging aspects of your job?

The most challenging thing about my work is dealing with the internal politics. I wish I could tell people that feminist organisations are a magical place where everyone is supportive and helpful, but they are not. They are rife with the same divisiveness, tension and egos of any other sector. Everyone I have ever known to have left “the movement” did so because of the actions of their colleagues, not the work of their enemies.

What I love the most about my vocation is the public education piece. I love being able to translate my work to various audiences in order to make it relevant and accessible. Seeing the light-bulb go off over people’s heads when they start connecting the dots or working through a challenging concept with someone who is initially resistant makes it all worthwhile. I have a lot of patience so I do not mind having the same conversation over and over again. If it eventually gets through to someone, then it was worth it! And I have seen how the very exposure to these ideas can be revolutionary for people. I love that I get to be a part of that transformation.

9. What would you say to readers of this interview who want to join the activist women’s rights movement but are either fearful of online harassment or just don’t know how to get started. What are their next steps at getting involved?

The most important thing to know about activism is that there is truly a place for everyone. The work that folks like myself do is definitely the most visible but that does not mean that only public speakers are welcome. So much of the revolution involves background work of meetings, lobbying, letter writing, legal maneuvering and other work that is away from the spotlight. If you are camera shy, there is still room for you!

If you are excited about an issue and you do not see anyone doing that work in your community, be that person! If you see a gap, occupy it. Do not worry about making it perfect. As long as you are honest about your limitations and connect with your allies, then go for it. In my experience, people stand around saying “Someone should really do something about X issue.” Then as soon as I say “Okay, I’ll start it”, folks come out of the woodwork ready to help. So often, people are just waiting for someone to start.

As for the reality of online harassment, I refuse to downplay it. It is real, it happens and it is awful. But successful activism happens both online and offline. You can dismantle patriarchy and never go on Twitter or write a blog post. If being a visible feminist online is too scary, I support you avoiding it altogether. But if you’re jumping into the fray, know that there are supports out there. Choose whatever approach you want to take regarding trolls and make it known. At the end of day, whether or not people get involved in feminist organising really comes down to each individual. As my brilliant friend Genevieve once told me “I do this work so that I can look myself in the mirror and look the world in the eye.”

But we can not dismantle sexism unless we call it out, time and time again. The power of violence against women and sexual violence in particular, is that we’re not even allowed to call it by name. It sustains itself because it is happening in a culture that silences those affected by it. We must call out violence against women by name and refuse to be silenced.