Lynn Fairweather, MSW is an abuse survivor who has worked in the domestic violence response and prevention field for more than twenty years. As President of Presage Consulting and Training, she provides expert guidance and specialised education to professionals who confront domestic violence in both the public and private sector. She has a Bachelor’s Degree in Social Science, a Master’s Degree in Social Work, and multiple domestic violence training certifications. Ms. Fairweather has served in shelters and police departments, on multidisciplinary task forces, and has facilitated victim support groups and batterer’s intervention programmes. She is an active member in the Association of Threat Assessment Professionals, and sits on the Board of Directors for Oregon’s Violence Against Women Political Action Committee. In 2012, Ms. Fairweather released her first book Stop Signs: Recognizing, Avoiding, and Escaping Abusive Relationships (Seal Press). 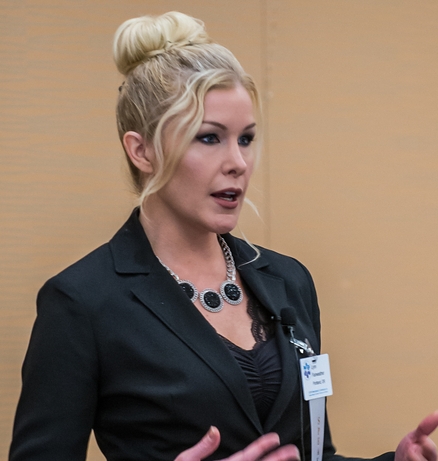 I am a survivor of domestic violence. I lived with my abuser for several years, during which I endured physical, sexual, verbal, psychological, and economic abuse.

I was able to end the relationship, borrow money from my parents, and use it to move into my own apartment. This was the beginning of several months’ worth of stalking and harassment, including a violent attack. Eventually, I left the state when it became clear that he would not stop.

I began and continue going to therapy, but my true, ongoing catharsis comes from my work. I have spent the last 20 years as a domestic violence advocate, counselor, speaker, and consultant. I serve in shelters, transitional housing programs, police stations, and courtrooms where I have helped thousands of victims find safety and freedom. I survived domestic violence, but it wasn’t enough for me to just heal myself. I felt like I had to do something to prevent as many women as possible from going through the same situation. In 2008, I opened Presage Consulting and Training, a specialised threat assessment firm that helps police, advocates, attorneys, and private corporations nationwide to evaluate and deal with the domestic violence dangers their communities face. I also put my knowledge and experience into a book, which seeks to educate and empower women to recognise, avoid, and escape abusive relationships. My work isn’t even close to finished, but now I’m a whole and confident human being with a happy marriage and two beautiful kids.

First, I would urge all women, particularly young ones, to “armour up” by getting educated on what abuse and abusers look like, so they’ll be better equipped to avoid and identify domestic violence. Second, my message to someone who is already in it: please talk to an advocate and make a plan – this isn’t going to get better, so you have to begin preparing your exit. Look for allies, save up some money, and use the criminal justice and social service systems that are set up to help you. Third, a message to people who have already escaped: learn how to assess and manage any future threats your abuser may pose. You don’t have to spend the rest of your life in fear, but you should have a solid foundation of knowledge about how to protect yourself and your children against further abuse.

We are only going to win this war by getting everyone on board at every level. By this, I mean we begin educating children – boys and girls – at a very young age about healthy interactions and relationships. We should teach our kids skills in resilience, as well as respect for self and others. We must involve men, bystanders, employers, schools, and everyone else who can help to recognise and intervene in dangerous situations. We have to change our laws to give victims just as many rights as we give offenders. We need increased penalties for domestic violence and other types of violence against women, in addition to accountability measures, such as mandatory supervision and batterer’s intervention courses. We should fully fund programmes for domestic violence response and prevention, and support issues such as reproductive rights that frequently intersect with domestic and sexual violence. Lastly, we have to change the shaming and damaging mythology that our culture condones about violence against women and work with the media to promote messages of support toward victims, instead of perpetuating the blame and stigmatisation they frequently face when coming forward.

I support The Pixel Project because domestic abuse and other types of gender-based violence feeds and grows on silence. If people hear survivors’ perspectives, they might recognise something within their own relationships or situations that could indicate future violence. They might realise it’s time to make a move and end the hell they’ve been living in. They can learn more about the subject and use that information to help a friend, neighbour, or co-worker that is being abused. I support The Pixel Project because it is bringing voices out of the dark and the only way we’ll ever really end violence against women is by shining our lights brightly enough to wake up the entire world.