Our fifth Survivor Stories interview is with Kathleen Milliken from the U.S.A.

Kathleen M. Milliken is a published author, her debut book “Escaping the Glass Cage: A Story of Survival and Empowerment from Domestic Violence” (under the name Schmidt), ghost writer, radio show host and founder of Project Empowerment and Climb for Empowerment, mountaineer, diver (she dove with sharks two years after living in a shelter for battered women), public speaker, Women’s Empowerment Coach/Mentor, workshop leader and mom, and that’s just her passion. Her “day job” is at a busy pediatric hospital in the administration part of their emergency department. She lives in the Pacific Northwest with her two young sons. 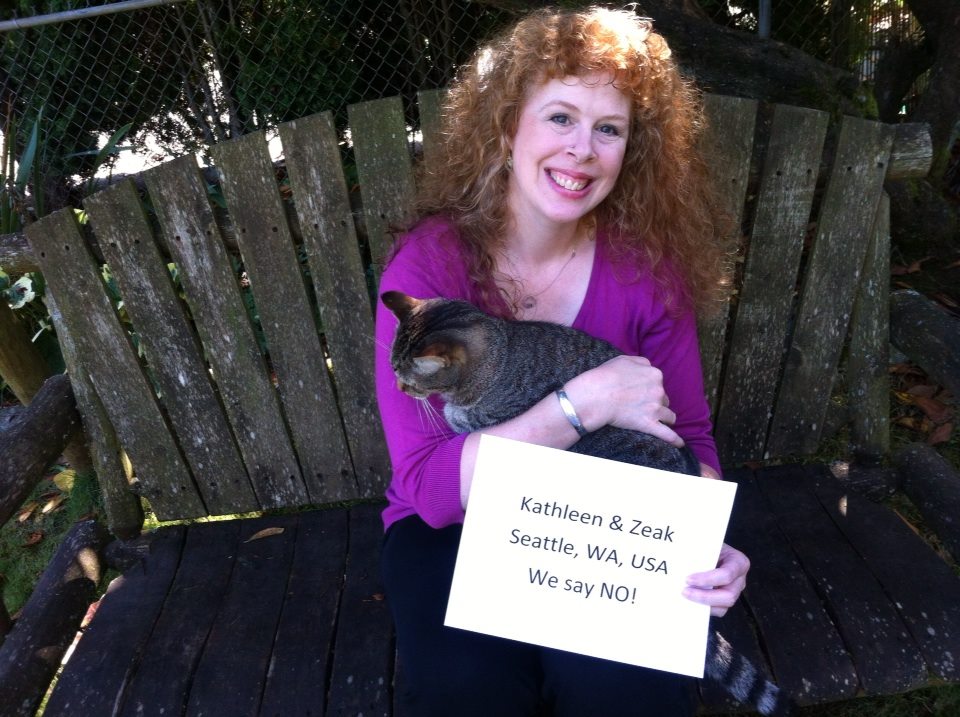 I’m no stranger to domestic violence as it was a regular event in my family while growing up. My mother endured emotional abuse, but never talked about it as it was always hushed and the “dirty little secret”. This had affected my choices in men/marriage. At the age of 19 I met my first husband and after just a few months of dating, I married him one week after my 20th birthday.

I’ve endured beatings to the point of unconsciousness, extensive bruising to my body and face that I tried to hide with makeup or sunglasses, broken bones, was shot, emotional and spiritual manipulation (he was a minister in our church) and sexual abuse. I became so empty and depressed that suicide felt like the only way out… and three times came close to ending my life.

I used to go to the library for solace and found a book titled “Creative Visualization” by Shakti Gawain. At that time I didn’t know how powerful the exercises where and I would read that book over and over and slowly began practicing the exercises. I also changed many of my inbred beliefs since childhood and knew even then, I was never “alone”, that there was a higher power looking out for me.

My ex and I had a cleaning business that catered to a restaurant chain. Often I would find money on the floor while cleaning, but I noticed an odd pattern. When I’d be lost in thought thinking of a different life, I’d find a dime on the floor. This went on for some time and I believed it was like breadcrumbs from the universe showing me that I was on the right path.

Over time I became strong enough to stand on my own two feet and after a terrible beating, I fought back. It was then I knew I had the strength to leave and begin again. A friend helped me escape and I was able to get a room at a shelter for battered women.

All healing and empowerment begins from within. I read empowering books; I wrote out everything I felt and endured and wrote my own book; I talked to other women in similar situations; I learned to scuba dive (while living in a shelter for battered women); I climbed a mountain (Mt. Rainier, twice to high camp at just over 11,000 ft); I learned to live again and find my passion and calling in life. You have to find something bigger then you to focus on and know that you have a purpose on this planet… and that does not include being someone’s doormat.

First off, breathe. You are a walking miracle and NO one has the right to treat you badly. Next, create a safety plan, have a bag packed if necessary with your essentials. I fled with a few belongings and clothes and never went back, I left everything behind, including my pets…..it was heart-breaking, but necessary for my survival (there are services now that can help you with your pet if you worry about their safety too). Get help, break your silence, call a local hotline for domestic violence, and call your family and friends. Find a way to get away from the abuse. There is no such thing as “mine isn’t as bad as your’s” or “it’s really not that bad, he doesn’t hit me” (yet), abuse is abuse and no one deserves to be treated that way.

Domestic Violence is a global problem, a cultural problem, a community problem, a family problem and a problem with self. It all stems from one. The abuser is often one who was abused, so the cycle continues and the one abused endured it while growing up. There of course are many, many other factors involved, but we have to really get to the core of the problem and heal it there. Until people really see how they are part of the problem and the solution that is where we can begin.

The Pixel Project is such a vital resource for women globally, to get help, break their silence, and help another. With modern society so reliant on the internet, The Pixel Project really reaches out to women all round the world. Through empowerment with music and the other programmes The Pixel Project utilises lifts people’s spirits and helps spread the word, not just about violence against women and girls, but about how one can get help. I’m proud to be part of this amazing team of tireless activists working to end violence against women and have climbed Mt. Rainier twice (Climb for Empowerment) to raise funds for this cause.