Ruth Jones, the Director of the National Centre for the Study and Prevention of Violence and Abuse who specialises in domestic and sexual violence. Ruth has been recognised for her work in the domestic and sexual abuse sector with a number of awards including the award for best UK Universities Applied Researcher (2010), was awarded the title of Worcestershire Woman of the Year in 2011 and was named one of 12 inspirational women of Europe in 2012. In part 2 of this month’s inspirational interview, Ruth continues her conversation with The Pixel Project on her work in addressing violence against women and the law’s effect on the problem in the UK. She talks about the role that education plays on changing society and the work that has been done so far.

You can read part I of her interview here.

6. The economic downturn has meant a significant cut to w 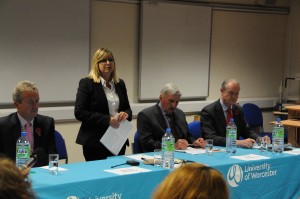 omen’s services including refuges and support centres throughout the UK. How do you think the cuts have affected women experiencing domestic violence?

The funding cuts have affected women experiencing domestic violence drastically. I began my own research at the beginning of the funding cuts (2010) that looked at the impact of the funding cuts on service provision and found that 53% of service providers had seen a negative impact on the level of service provision they could offer. Of these, 44% said they had lost staff and 28% said services had closed, with the biggest cut by far being to Children’s services. More recent research (2011) shows that, on a typical day, 230 women seeking refuge were turned away by Women’s Aid due to the lack of refuge provision, and that 78% of services working to reform male perpetrators of domestic violence reduced the number of clients they were able to assist (Walby, 2012). In 2014, services are looking at a reduction in funding of up to 50%.

I am particularly concerned that any ring-fenced funding is for high risk cases and that funding to early intervention initiatives that might prevent cases from ever becoming high risk are being cut. With evidence consistently showing that violence against women escalates, that the impact of such violence is profound, and the cost to society runs to billions of pounds (Walby, 2009), this is clearly a false economy.

7. Clare’s Law is named after a young woman called Clare Wood, who was horrifically murdered by a new partner after meeting him on Facebook. In essence, Clare’s Law allows women to check a new partner’s history for violence. However it has been criticised by many as not going far enough and being a ‘headline grabber’ policy. What do you think of Clare’s Law?

In theory, Clare’s Law can be a positive piece of legislation that could protect many potential victims if implemented correctly, but I do have some concerns.

First of all, I am concerned that the support services that should be made available to support any woman receiving this information will not be, given the current funding cuts. I wonder how she will be safe-guarded, especially if she was to confront her partner. Questions must be raised about the responsibility of disclosing officers. Should they make referrals to local multi-agency risk assessment conferences if the information held indicates that the woman making a request for information might be at high risk? Will there be an element of victim blaming in cases where a woman is made aware that her partner has a history of abuse and ‘chooses’ to stay with him? Then is the issue that most incidents of domestic violence are not reported and, therefore, information given that shows no record of abuse may lull women into a false sense of security. It is my belief that if a woman feels the need to make such checks, then she already has some feeling of unease and her instinct may be overshadowed by the data received.

I don’t have an issue with sharing this information within strict criteria, but Clare’s law is an additional ‘tool’ in the toolkit of legislation, policy, and good practice, but I feel that it should not be used in isolation, but in conjunction with other ‘tools,’ including support services.

8. How do you feel about the current trend towards engaging men to end violence against women?

I am always surprised when people talk about the ‘current’ trend towards engaging men to end violence against women. If we go back to first wave feminism, we find that there were many men who were engaged in the ‘current’ trend to end violence against women and who were in support of gender equality. In 1825, William Thompson wrote ‘Appeal of One Half the Human Race, Women, Against the Pretensions of the Other Half, Men, to Retain Them in Political, and thence in Civil and Domestic Slavery.’ John Stuart Mill wrote ‘The Subjection of Women’ in 1869 and, even before this, London magistrate Thomas Phinn published statistics on the number of assaults by men against women and children in London (1852), revealing that one in six assaults occurred within the family. In 1874, a parliamentary report by male politicians was published on the pervasiveness of violence against women outlining hundreds of reports of domestic abuse and brutal wife murder, and making recommendations for legal reform. Men campaigned with and for women and against their position in society. I think we have a lot to thank these men for.

It is only with radical feminism in the 1970’s that the men were excluded from campaigning alongside women. There were men that continued to support women’s causes, including the fight against gender-based violence. I believe that women-only spaces have been essential for women to feel safe when they have been abused, but they need the chance to see that not all men are abusive.

9. You have contributed to policy making in developing countries like India and Fiji. How did you find these experiences and has it added to your understanding of ending domestic violence in ‘developed’ countries like the UK?

I have been very lucky to have the opportunity to work in developing countries. The experience challenged me and I learnt a lot about working sensitively within different cultural contexts to challenge ideas about gender, power, and control. Taking a Human Rights perspective was vital for engaging policy makers and this work reminded me that writing policies is just the first step in showing any given society that violence and abuse is not acceptable. It is important to remember that policies may be designed to change practices but they do not necessarily change attitudes, and so the work we did in developing countries included concerted public awareness/education campaigns that ran alongside the introduction of policies. A commitment in terms of time and resources are fundamental to this process and this is something we are lacking during the funding crisis. I believe that any country ending domestic violence is dependent on having the means to work towards this goal. Current funding cuts will undo the progress made to date and this is painful to see.

Work in developing countries is also reliant on engaging local communities. While in Fiji, I developed a programme for working with men to challenge attitudes about gendered roles and the key to success was working with local communities, NGOs, and University students. This helped me understand the context of people’s lives and these people were able to alter resources that I wrote to make them culturally appropriate, allowing them to take ownership of the programme. It was a fantastic experience.

Gender-based violence will never be prevented if we don’t address the underlying factors that are conducive to its perpetration of violence, not least of which is gender inequality. In a society in which women and girls continue to be sexualised, objectified, and vilified, we have still have a long way to go. As Mary Beard said in a London Review of Books lecture earlier this month – these attitudes towards women are ‘hardwired’ into our culture. I believe that no amount of policy can change this. This is the role of education and this is why I am so passionate about the work which I do at the University of Worcester.

At the University of Worcester, we not only offer qualifications for professionals to enable them to have a deeper understanding of violence and abuse, but we also work towards prevention through study and research and through the promotion of equality and respect in our staff and student body. Beginning in September 2014, we will be offering bystander training to allow students to challenge attitudes in their immediate environment in order to tackle peer approval of violence and abuse. We are then mobilising a community to take responsibility for their own actions and to challenge the actions of others with a view to prevention.