Our twentieth Dad is Jeff Van Pelt. Jeff is originally from Midlothian, Virginia, USA and now lives in Cuenca, Ecuador. He and his wife decided to retire early and pursue new adventures in Ecuador once their two children, Neil and Hannah, were grown, and while they are still healthy and “young.” They sold their house, car and truck, and all of their belongings except what would fit into 4 suitcases and 2 carry-ons. Jeff loves the freedom of not owning a lot of stuff – “we can easily pick up and move again within Ecuador, or even to another country, if we choose.” 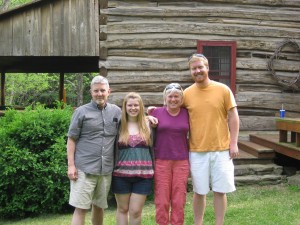 The best thing about being a Dad is what it creates in you. It makes you want to be your best, to overcome selfishness, and to focus on someone else. It is also very satisfying to see a person that you “created” (together with the other parent) blossom and flourish into an admirable human being. And you know you are never alone in the world because there is at least one person who cares deeply about what happens to you.

My father was very respectful toward women and girls, and all people for that matter. He and my mother were ardent advocates of women’s rights at least since the 1970s. He said that having a daughter should make any man care about women’s equality of rights. I believe he influenced me to be a believer in women’s rights and to raise both of my children the same, without respect to gender.

First, men (and women too) have to stop giving their sons the message that they are somehow better or more valued than girls, because such a message imparts to boys feelings of entitlement in relation to women. They feel they deserve obedience, passiveness, acquiescence – and when they don’t get it, they feel rage, which often leads to violence. Raising your children to respect each other and to view girls and women as equals helps instill that women are to be as valued in our society as males.

Click here to learn how your donation will be used and to donate:https://www.thepixelproject.net/getting-involved-an-introduction/donate-to-the-pixel-project/