To acknowledge the vital role Dads play in families, cultures and communities worldwide.
To showcase good men from different walks of life who are fabulous positive non-violent male role models.
Through this campaign, we will be publishing a short interview with a different Dad on each day of the month of June.

Jahanath Muthusamy is the second child and the eldest son in a family of eight, born to working class parents in October 1955, in Cameron Highlands, Pahang, Malaysia. Through the support of his parents, siblings and good friends, Jahanath worked his way through the ranks to the position of CEO in a multinational insurance company, centered both in Malaysia and Indonesia. in 1980, Jahanath married a beautiful woman and over the next five years became the proud father of of 2 beautiful girls and a handsome son. In 2012, Jahanath became a proud grandfather to a wonderful boy. After 37 years of executive leadership, he retired in 2012 and have since established a couple of sole proprietorships. Golf is his passion. 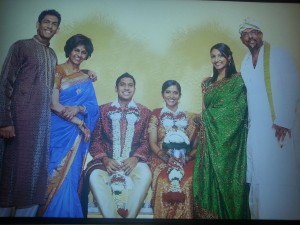 When the children are toddlers it is the unconditional love that a father gets. The children make you feel as if you are the best person in the world, their hero, their Superman. No amount of stress and worry can stand in the way of the pure love of the children. And the best thing about this is that a Dad feels proud of having created such marvels. When the kids start growing up and start finding their place in the world, it feels as though you are losing them. But they come back and make you whole again. With my children all grown up, I feel that sometimes they treat me as their kid and tell me what to do and what not to! With my grandson now, I am reliving that feeling of a new dad. The only difference is that I spend a lot more time with him – which regrettably I did not get to do with my kids. I was and continue to be proud of my children.

Regrettably, my father was not a good role model to be followed when it came to the treatment of women. As a man working as a labourer and with 7 mouths to feed, he was always on edge. While my mother bore the brunt of it, we children were not spared. Surprisingly, all my siblings and I turned out none the worse for the following reasons:

1) We were not alone as a family who occasionally endured this challenge. Scores of families around us were in the same predicament. In a way this took away a lot of the stress.

2) My mother was a lady who was full of love and affection for us and also someone who was mentally very strong. Another strong lady in my life was my late wife. These are the people who were the strength to us and who ensured that we were not scarred by the challenges.

Having said the above, am I angry at my father? No, because he was not a malicious person, he was a man under great pressure. As a father of three children I can empathise with him. Do I then condone his behaviour? Definitely not. As far as my brothers and I are concerned, we learnt to respect women and girls from my mother and sisters. I am sure that my daughters will attest to this.

I am a firm believer in the belief that before one starts correcting the world, one needs to be exemplary at home. Respecting our mother, sisters, daughters and wives is the cornerstone to respecting the fairer sex in the broader world. Fathers are obviously the key to this. The immediate circle of friends, office mates and others deserve equal respect as well. In our society, religious and cultural beliefs play a very big role in how a male views a female. Females are seen as unimportant and as objects who exist for men’s wants and desires. This must change. Laws to protect women and the respect for those laws must be inculcated. Last but not least, women themselves have a role to play. They must respect themselves. In many cultures, a male progeny is desired and when he is born is treated like a king in the house, at the expense of his sisters. Is it a surprise then that he may grow up believing that women are the inferior breed? Equal respect is critical. I also do not see anything in schools being done to inculcate respect. There is a proverb in Tamil which says “what does not bend at 5, will not bend at 60”.