Our Inspirational Interview this month is with 18-year-old anti-Female Genital Mutilation activist Muna Hassan. Muna belongs to a charity based in Bristol, UK, called Integrate Bristol. Integrate Bristol aims to help children from other countries integrate into British life and also campaigns on key areas that can affect children negatively. One of Integrate Bristol’s core campaigns is the eradication of Female Genital Mutilation (FGM) in the UK and in the Bristol area. An estimated 24,000 girls are at risk of FGM yet there has never been a conviction for perpetrating this crime. Muna has been working hard with her fellow activists to bring about change and get people talking about it. Muna has taken time out of her college studies to talk to us about FGM activism, why UK politicians need to stop hiding behind “cultural” excuses, and how young people (and people of all ages!) can get involved in VAWG and FGM activism too. 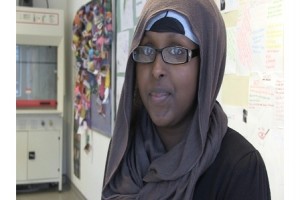 Female genital mutilation (FGM) involves cutting away part or all of a woman’s sexual organs. In the most extreme form, the internal and external labia are removed and the flesh is closed leaving only a small opening for urine and menstrual blood. In the UK, girls are more likely to be subjected to type I, which involves removing all or part of the clitoris and the prepuce. As it is not taken seriously by many in positions of authority, thousands of girls are being mutilated each year, and no one seems to be protecting them.

2. How did you become involved with campaigning against FGM?

We became involved through the work of the local charity Integrate Bristol, UK. A small group of us had started talking about FGM – we knew what it was, but hadn’t really thought about the implications of the practice, nor about the horrendous consequences for those subjected to it. We wanted to do something, but didn’t know what or how to approach it. Traditionally, we are not supposed to talk about FGM – it is taboo. But as a group, we grew in courage and now, most of us are outspoken campaigners! 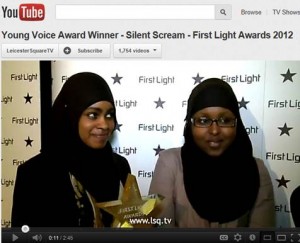 There were only four of us when we started, but four years on, there are now more than eighty in our group and boys have joined as well. So far, we have: written poetry; written and produced ‘Why?’, a drama-doc for radio which was featured on radio 4’s Woman’s Hour; written and produced ‘Silent Scream’, a docu-drama which has since won several awards and is used as a teaching resource internationally; and we have planned, organised and hosted a national conference. Currently we are working on a stage production about VAWG – it’s not as depressing as it sounds, actually it’s quite funny in places! We’re hoping to have the play performed at the Bristol Old Vic next summer, followed by a panel discussion. We’re doing lots of campaigning, meeting some amazing people and also some not very nice ones. Above all, we are learning that we have a voice, that people listen and that we really can make a difference.

3. What is the situation here in the UK?

It’s very complicated. Everyone will agree that FGM is wrong, that it’s an abuse of human rights and that it’s child abuse. However much they talk about it and agree that it’s wrong, policy makers have yet to implement effective policies that will really protect girls. They are so frightened of losing votes, or being accused of racism, that nothing truly effective is done. If we followed the French model, many girls would be protected. As an example, all girls, regardless of race, should be examined up to school age. It’s not only about FGM – sexual abuse, infections and many other issues could be detected earlier if everyone accepted that women have vaginas – and that vaginas are nothing to be ashamed or frightened of!

In my school, because of the work we have done, young people – not just girls – are able to talk openly about FGM. They are not fearful, or ashamed. Our work has had a huge impact on the young people of Bristol. Of course there are people who oppose our work – somebody even tried very hard to block the showcasing of our film Silent Scream. It was the police, the safeguarding Nurse and above all, our mothers, who made sure that the premiere went ahead. There are now lots of us and more and more people are supporting our work so we aren’t afraid anymore. The work we do should be replicated in schools around the country – if PSHE were statutory, it would be a lot easier. Education is the only way you can change the views of the next generation of mothers.

4. What is the situation compared with other counties in Europe?

Sadly, the UK is far behind other European countries in terms of safeguarding girls from undergoing FGM. It all boils down to a misguided political correctness, the fear of losing votes, and that dreaded word “racist”. The irony is that by ignoring FGM, there really is a situation of institutionalised racism. Racism born out of cowardice. Whatever their race, every girl should be protected.

5. What do we need to do to change things?

The medical profession in this country needs to change. All medical professionals need to be able to recognise the different types of FGM – we held a national, three-stranded conference at Bristol University in July, and there were a few doctors who didn’t even know that FGM happened to girls in this country. We desperately need accurate statistics on prevalence because those who want us to stay silent claim that FGM doesn’t happen. We know it does – girls talk! Reliable, admissible statistics can only be provided by hospitals. If these figures were made available, the government would be ashamed and would have to do something.

6. Please tell us more about the current situation in your home country, Sweden, with FGM.

That’s an easy one. Sweden is doing far better at protecting their young girls and women than the UK is. I was born and raised in Sweden up to the age of 9. In Sweden, schools include education about FGM in the curriculum. They follow strict safeguarding procedures, which means teachers have no right to assume that a child is safe or not, and talking about these issues is not such a challenge as it is here. FGM is mainstreamed and midwives and nurses make it clear to pregnant mothers that FGM is illegal and they can face time in prison if they do cut their daughters. What about here you ask? None of that seems to be put in place. A law is there, just never enforced. Schools don’t follow the strict safe guarding procedures and FGM is never mentioned within the curriculum. You can understand now why girls in Sweden would feel far safer than girls from the UK.

Part 2 of our interview with Muna Hassan will be published tomorrow.