In October 2011, our partner, the White Ribbon campaign, released a brand new resource – an issue brief entitled “Engaging Men and Boys to Reduce and Prevent Gender-based Violence”. This is an issue that is extremely close to our hearts because The Pixel Project’s mission is to get men working with women to prevent, stop and end violence against women.

We caught up with Todd Minerson, Executive Director of the White Ribbon campaign and he talked about the issue brief, how it came about and how it will help get more men and boys on board the cause. 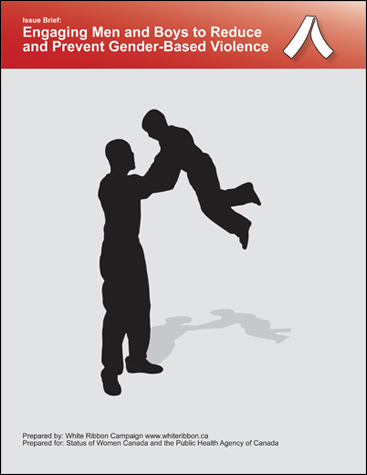 Tell us about White Ribbon’s brand new resource – the Issue Brief entitled “Engaging Men and Boys to Reduce and Prevent Gender-based Violence”. In a nutshell, what is it about and what approach does it take to the challenge of getting men and boys engaged with the movement to end violence against women?

The Issue Brief examines the many dimensions of gender-based violence; impacts on communities of interest; the evidence base, frameworks, strategies and positive roles men can play; and finally some of the risks, limitations and additional considerations in this field of work.

How and why did the issue brief come about?

This Issue Brief was commissioned by Status of Women Canada (SWC) in collaboration with The Public Health Agency of Canada, both agencies with a mandate to address gender equality and violence against women. Together with these two agencies, the White Ribbon Campaign was interested in highlighting the positive role that men and boys can play in ending violence against women. White Ribbon Campaign staff Todd Minerson, Humberto Carolo, Tuval Dinner and Clay Jones conducted the background research and authored the brief.

What is the role of Status of Women Canada (SWC) and the Public Health Agency of Canada (PHAC) in helping the issue brief take shape?

SWC and PHAC engaged the White Ribbon Campaign as a knowledge expert organization on the topic of working with men and boys to end violence against women. We worked with the two agencies to put together the framework for the paper and identify topics of interest. The issue brief identifies many opportunities where the inclusion and engagement of men and boys in strategies, programs and campaigns can have a positive impact on the lives of women and children, and men and boys themselves. In the paper, we make the point that work with men and boys has proven to be effective and is needed in order to prevent violence against women.

It what ways can activists, educators, leaders and advocates use the issue brief to help prevent, stop and end violence against women in their communities?

The issue paper provides an opportunity for those involved and interested in promoting social justice, gender equality, and ending gender-based violence to learn about and consider the positive role of men and boys in this work. Front line workers, educators, NGO staff, administrators, and policy-makers can use the proven strategies, promising intervention models, and possible approaches identified to develop campaigns, programs, policies, and other initiatives to effectively address gender-based violence in local communities around the world.

As the issue brief has a Canadian context and solutions to engaging men and boys in the fight to end violence against women can vary from culture to culture and nation to nation, how can activists, educators, leaders and advocates outside Canada use the issue brief to help further their efforts?

Although framed in the Canadian context, the issue brief draws on the experience of the White Ribbon Campaign and its partners around the world over the past 20 years. The paper identifies opportunities to engage men across all ages and socio-cultural groups. The brief includes information relevant to Canada as well as many parts of the world, including the role of men in ending harmful traditional practices such early and forced marriage, female genital mutilation, elder abuse, and honour crimes. It also includes a campaign example targeting men in indigenous communities, and considerations for working with men in rural settings and immigrant communities. In Canada or elsewhere, activists, educators, leaders and advocates are encouraged to review the information in the issue brief and consider how similar strategies and frameworks can be potentially adapted to or created in the local context.