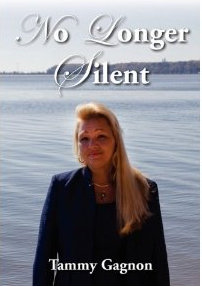 It is hard to put into words the impact of No Longer Silent, the life story of Tammy Gagnon, a survivor of various forms of violence: rape, incest, domestic violence. It is about 200 pages in length; a slim volume.

Those few pages of Tammy Gagnon’s life story will allow the reader to learn more about the psychological harm of sexual and domestic violence and the way a society should or should not respond to it than reading hundreds of reports and statistics. It will move the reader to seriously question the efficiency and adequacy of support systems for people in need in the community that he or she lives in: the legal system of one’s country, the network of therapists that is necessary to deal with people experiencing the psychological harm of so much violence, and the efficiency of religious communities in reaching out to people whom they are supposed to help.

Tammy Gagnon came from a family that was no stranger to violence. Her father was an affectionate man who cared deeply for his family, but who had moments of rage that he took out on her mother. When her parents discovered that her grandfather had molested her, they tried to suppress the story out of shame, a move that devastated Tammy psychologically. Her home transformed into a place of unease and discomfort, Tammy performed poorly in school and continually dropped out to run away from home. For most of her young adult life Tammy was no stranger to various forms of violence: she experienced rape, abandonment, and domestic violence.

The result of this was serious psychological harm: she began to embark on a journey of self-destruction, using various forms of drugs and overindulging in alcohol. Rehabilitation programmes such as Alcoholics Anonymous had no impact on her. Finding herself imprisoned, she underwent an intensive counseling programme that forced her to peel away the layers of emotional defensiveness that she had built for herself, a first step towards reforming her life. But it took many years until she could find the strength to align her life away from a path of destructiveness into one that enabled her to provide a sound future and anchor for her daughters.

There is no arguing that No Longer Silent is an uneasy read. It is 200 pages of a very intense, very personal journey into the world of someone who has undergone many levels of hurt and who has built many layers of defenses. It is precisely because of this that the reader is truly acquainted with the psychological effects of a life of violence and the effectiveness of existing means of therapy within one’s community.

The title No Longer Silent may refer to Tammy Gagnon’s decision to no longer remain silent about the ‘secrets’ that she was supposed to keep out of shame, and to speak out, but it could also refer to the fact that this book is a voice for the many people in the world who are trapped in cycles of emotional, sexual and physical violence and who are unable to speak of them because of the great level of pain. Although Tammy’s experience was that of a woman living in the United States, there are many things she did and decisions she made that are similar to many young women around the world who themselves were survivors of sexual abuse such as rape and incest. It was an unsettling experience to read No Longer Silent and to recognize that there are so many people in the world for whom what happened in the book is a reality.

The foreword to No Longer Silent by Dr. Patrick B. McGinnis, a marriage counselor, states that Tammy has undergone a hero’s journey. This is a truly remarkable account of someone who has undergone great trials in her life and has triumphed. It is a searing insight into the psychological effects of violence against women, and the many forms violence can take. It is a powerful statement about the network of assistance for people caught in this cycle. It will cause many of us to re-examine the available structure of assistance that we provide for those in need in our respective communities, and –as Tammy herself hopes to achieve with her book—will inspire many others who have gone through something similar to her to survive. This book is highly recommended.

Tammy Gagnon can be reached via her website, TammyGagnon.com (http://www.tammygagnon.com). Her book, No Longer Silent, will be featured in the upcoming Book Expo America event in New York.