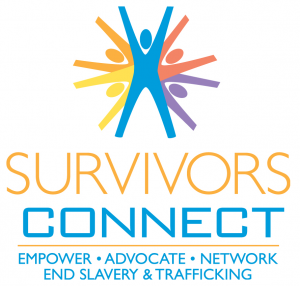 Could you tell us about your most memorable experience while working for Survivors Connect?

There’s a lot of them. The most exciting thing I think, for me, is when we see a project working and working well, and it was something that we had just kind of conceptualised. To see it go from concept to fruition is such an exciting process.

For example, our work revolves around using innovative and appropriate information and communication technologies (ICTs) or open source technologies for the purposes of enhancing anti-trafficking projects.

One thing that we did in Vietnam and Haiti was create a text message based helpline and referral system. I really wasn’t sure if this was going to work—it was just an idea that I had—because of my knowledge of the issue areas and gaps in services in the communities that we were working in but also this realization of the near ubiquitous ownership of text and voice based mobile phones. I thought, maybe there is a way that we can use this to support more women and children who may be victims of violence after the earthquake, or, in the case of Vietnam, help rural communities have access to information about safe migration and jobs abroad because it’s informal sector workers that come from these rural communities that tend to be most vulnerable to human trafficking.

We linked up with field partners who were already doing this kind of work and said that they’d like to experiment with this technology as well. We’ve developed really successful projects that have been the framework for our modules that we’ll share with other NGOs who wish to pilot more projects.

For me, the strongest memories come when we see a text message received from someone who was in critical need of help or had some really interesting questions that gave us insight as to potential gaps in services in human trafficking work and how we could improve from there. I think the only way we’re going to improve our responses to trafficking is if we listen to those who are most vulnerable to it, and the tools and projects we’ve created allow us to do that. These experiences have been very enlightening for us and we really feed off of those.

With the Survivors’ Quilt project in particular, when survivors talk about how Survivors Connect helped, it was first and foremost the opportunity to share their story. They may be able to share their story within the confines of the NGO that supported their rehabilitation, but to go on a global level is something that we’ve been able to provide.

And some of the other projects that we have, which are technology based, have helped survivors in different ways: giving them access to information to empower them in ways that will prevent trafficking in the future. Our SMS projects helps two populations—survivors and those who are vulnerable.

For those who are victims, a mobile phone is integral to potentially receiving rescue. Sometimes we forget that for victims, they may still be in the presence of their perpetrator so a text message is a discreet form of communication. You can quickly send a text message without being overheard. It’s also the cheapest form of communication—usually a voice-based call will take much longer and it will cost more.

The other part of this is that for vulnerable communities, it’s really important for them because it’s cheap, it’s quick and easy and all of those things, but it gives them an easy outlet by which they can communicate to city-based advocates for information about safe migration. For example, in the Vietnam project, we have remote rural communities where people are often trafficked for the purpose of labour to China and other parts of East Asia. NGOs from these cities tend to come up to these rural communities once or twice a year to do awareness-raising activities.

That on its own is not enough to prevent slavery. You can raise someone’s awareness but if they’ve been offered a job, they may know the risks but they will go anyway because they’re in such economic hardship. With a text-message based helpline and referral system, we’re able to give them information that they can use to make informed decisions. So now we’ve transformed mobile phones into a tool of advocacy but also a very empowering tool that goes beyond the sheer communicative capacity, but also to give them information that protects them from potential enslavement.

Tell us a bit about what you do for other projects you are involved in (Free the Slaves and Saving Mothers).

These were things that I used to do in my “past life.” Saving Mothers was a non-profit that I helped to start when I was an undergraduate in Berkeley. This is an organisation that’s dedicated to ending maternal mortality. They work in a number of developing countries. The founder runs the entire organisation now and is doing really well for herself. I’m active supporter and donor but not so actively involved with them now.

I worked for Free the Slaves after I graduated from Berkeley. They had launched that year a series of freedom awards for individuals and organisations that have made some sort of impact in the broader anti-slavery movement. The awards had several different categories. I won one called the Anne Zimmerman Fellowship Freedom Award, which gave me a year’s worth of work at Free the Slaves as a Zimmerman fellow. I did a lot of policy advocacy work and volunteer co-ordination. That year was a re-authorisation year for our national law against trafficking, so it was really exciting to be able to actively participate in that.

You also do a fair bit of art. What inspires you in your art? What are your common themes and what do you usually intend to convey?

I have created a website for some of my artwork but I haven’t actually formally launched it yet.

I’ve never done any formal training. The artistic bug runs in our family. When I get really stressed out or I have a hard day, I seek solace in my sketch pad and my charcoal. I just draw what comes to me and I go through different phases when I draw. Lately I’ve been drawing hands in different positions. I’m not exactly sure how this started but I think of all the parts of the body the hand is the most important and most interesting thing because we can do so much with it—create beautiful works of writing, eat, express love and affection—but we can also use our hands to inflict pain.

To draw hands in different forms and to evoke a particular emotion that I may be feeling is the field that I’m exploring right now. For example, I just did a sketch of two adult hands holding baby feet—such a sweet form of expression and of love.

In other times, when I’m feeling down about something, my drawing will come out very differently. For example, a few months ago I drew a picture of two hands that look incredibly strained where you have veins popping out and the two hands are bound by a rope. This is my expression of the struggle of being enslaved and what that might feel and look like, and to get all of the feeling, not in someone’s face, but simply in their hands.

What are the simple things ordinary men and women can do to help raise awareness about human trafficking and slavery, and to end it?

I get asked this question a lot. I think that there really isn’t one simple thing but if you know about the issue, try to share that information with people.

But I think that to really make a dent in this problem and to end it, we should be talking about how slavery looks in our own communities and then how to actually spot some of the signs and what to do about it.

There are a lot of services available in the United States, in the UK and in many parts of the developed world, such as hotlines and local referral systems and law enforcement that you can go to to let them know what’s actually going on. So raise awareness, but raise it in such a way that it motivates people to act because the simple things that they can do, even something as small as sending in a tip, could make all the difference in saving someone’s life.

For example, I gave a talk once to a group of high school students in New York City. I told them the different things they could do and one of the girls came up to me later and said that she saw a boy selling pirated DVDs in a milk carton and he didn’t look well and he didn’t have any supervision—he was just standing out in the street selling them. That is a very strange sort of picture to see. That is not typical. You see street vendors all over New York, but this boy was unaccompanied, did not look healthy, was selling these counterfeit DVDs—there’s something wrong with this picture. There have been cases in the past where traffickers did come up with sort of a begging ring or a scheme like this one where they were using children to sell things. It seemed like textbook trafficking to me potentially.

So, here this girl had the idea but she didn’t know who to call. The funny thing was, even after I gave her the phone number, she was still really nervous, really reluctant to call. That indicates to me that we still have a huge hurdle, that even if we know about it, awareness alone isn’t enough. Awareness backed by knowing how to act when you see something wrong is what we need. We need more vigilant community members, so there’s been a lot of activism around getting the people whom we would deem to be our eyes and ears to get more involved. For example, taxi drivers, plumbers and repairmen—the kind of occupations who have insider views to places that the general public wouldn’t be able to see. It’s about raising people’s consciousness with a further impetus for action.