As part of our ‘Inspirational Interviews’ series featuring some of the bravest and most formidable activists working to end violence against women around the world, we are pleased today to share our interview with the founder of Survivors Connect, Aashika Damodar. 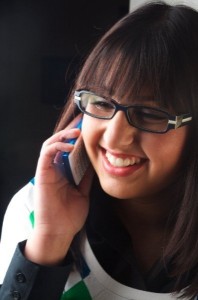 Aashika Damodar is the founder of Survivors Connect, a collaborative project to build global advocacy & support networks of survivors and activists working to end modern-day slavery and human trafficking. The organisation uses innovative instruments such as social media, new technologies and other interactive media to empower and enhance protection, prosecution and prevention efforts.

This is a tricky question because the issue of modern-day slavery, human trafficking and violence against women more broadly has always been a part of my life. I grew up in a pretty conservative Indian family. We had moved to America from India when I was a child. My family had these entrenched ideas about what a woman’s role was in the family, what a male’s role was. It was very frustrating for me to see these gender preferences and gender differences and a lot of it, I couldn’t ever make an explanation for it.

When I was 16 years old and dreaming to go to Berkeley, my parents basically told me that it was time for me to get married.

They had arranged my marriage to somebody in India and they said it was something I should really be seriously considering. I said, no. I basically had to fight tooth and nail with my parents to stop that marriage because I wanted nothing more than to go to school.

What happened was the man that I was arranged to be married to at 16 got married to a distant cousin of mine and it turns out that she was nearly trafficked for the purpose of forced marriage and domestic servitude. Her family hadn’t heard from her in over a year and it was because the husband was never there and the in-laws basically kept her as a slave in their house. So it scares me, thinking, goodness, this could have been me. And it was around this time that [after two years in community college] I was making my way to go to Berkeley and I was accepted and because of the news that we learned in India and everything else, [my parents] decided to say yes.

And then when I got to Berkeley, I found out about a trafficking case that had occurred right across from my dormitory. There was a famous case of labour trafficking and sex trafficking right across from my dorm by this guy named Lakireddy Reddy. He had trafficked several Indians for the purpose of labour in his Indian restaurant that we used to go to regularly and had commercially sexually exploited two young girls in the apartment complex across from my dorm. So, by this point, this issue had crept into so many facets of my life—my personal life to where I might spend my college days and rent my apartment to where I might eat and so there was, literally, no escaping this issue for me and I just knew at that point that I had to commit my life to this cause. I think that ever since I was a child I’ve wanted to work on women’s rights issues and human rights more broadly because the world that I grew up in made no sense.

Who were your sources of inspiration? Who trained and developed you in becoming an activist?

I’m inspired by so many things really. The reason our organisation is called Survivors Connect is because of the survivors who inspired this NGO.

One of our first activities that we did at Survivors Connect was the Survivors’ Quilt. Its mission and purpose was twofold: one was to provide survivors around the world with culturally sensitive and appropriate means of rehabilitation and therapy through an art project because art is one of those things that is universally known and it’s not so controversial as going to a psychologist or something, which would be frowned upon in many communities. Two was to capture their stories and experiences via this medium by which you could share with communities around the world so they could see the multifaceted nature of modern-day slavery and just know that it’s not just about sex trafficking and it’s not about just about domestic servitude. It’s about all different types of slavery.

Each of these survivors, as we started this project, they had such incredible stories, and that’s where my inspiration really came from was the fact that they’d been through so much. To hear from these survivors and what they’ve been through and the amount of courage that they’ve had to come forth against their trafficker, to be able to share their story, all of these things—they are incredibly resilient. If they can do that, then I think we can solve any problem, which is what I’m inspired by. There’s nobody else that moves me in the same way.

With regards to the second question—who trained and developed me into becoming an activist—I don’t really think I’ve had formal training in this, to be honest. I don’t necessarily think you need training to become an activist. What you need is passion and a really good understanding of the issue. I think that with human trafficking, it’s really easy to get galvanised around it because it’s so egregious, it’s so gut-wrenching. However, this issue is incredibly complex. To be a good activist, you need to understand all the different legal frameworks that come into play when you’re addressing human trafficking, how it poses problems for transnational advocacy, how it’s a problem for domestic policy and all the different agencies that get involved and different groups in civil society.

For me, I spent a lot of time getting to know the issue first, reading a lot of literature, working with other non-profits, either in a volunteer, intern, or employment capacity, before I even started to call myself an activist because I don’t feel comfortable with the term unless I know really what I’m doing. Sometimes advocacy can end up hurting people more than it can help if it’s not framed correctly.

I’ll give you an example. The cocoa sector in Ghana, which as a lot of slave labour in it, a lot of NGOs when this came to light advocated for boycotting, and boycotting makes sense on one front: thinking that you can stop the chocolate factories from sourcing where there’s slave labour. However, this is extremely problematic because the majority of workers on cocoa farms are not enslaved, so to boycott means you would be hurting a huge population of people who are not enslaved. That’s what I mean about being an informed advocate and I think that is probably more important than actual formal training in advocacy.

What was your motivation for starting Survivors Connect?

This is mostly answered above, but one of the other key reasons I started Survivors Connect was I had worked for several non-profits and I had a lot of ideas about what I wanted to do project-wise, and it was hard for me to another NGO to latch onto the idea and let me experiment with it. So part of the motivation too was creating my own non-profit space by which I could try out my ideas and move them forward. So beyond my own personal motivation for doing this was the fact that I couldn’t do it anywhere else with support so I had to create my own space for it.

Can you tell us about the early days of Survivors Connect? What were the difficulties that you encountered and how did you overcome them?

It was really difficult. Every state in the US has different laws for starting an NGO and in California, recently, they made up a system where you have to be in existence for three years before you can apply for your own 501c3 (charitable) status, meaning that you need to be sponsored by another NGO for a while and prove that you can actually financially make it and that you are sustainable before you apply for charity status. We basically had to do that and we’re still in the process now. We have a fiscal sponsor whom we’ve been with for a year and a half. So, just the actual setting up of a charity—it’s not easy. I think people have lots of great ideas for NGOs but doing the nitty gritty like filing for status, writing up mission and vision statements, your goals, writing by-laws, finding board members—those are more administrative level things that took me away from programmatic work for a while and that was challenging.

There wasn’t a really surefire way to overcome them except that you just work really hard at it because if you believe in your cause strongly enough, then you will go through the work to make it happen.

How did you assemble your team? What keeps you all together when the times get rough?

We have a very small team. There’s only, I would say, two and a half of us. I’m based in the UK now and the rest of the team is in California. It’s been quite taxing because I’m away. The good thing about Survivors Connect is that we’re not a service providing NGO. We’re much like The Pixel Project in that you’re operating on a global matrix. You can have team members all over the world. We came together, Joanna and I, the two core members at an event in Sacramento—an anti-slavery awareness event, an art exhibit—and we were both working the event and we had the Survivors’ Quilt on display and one thing led to another and we talked for hours and hours and realized that we had very similar views, a very similar work style. We felt like it could be a perfect partnership and we would have a lot of fun working on Survivors Connect together.

Our team is wonderful. All of us are on the same page about everything, we feel equally passionate about the issue, and you never feel like the commitment is wavering, and it’s that very commitment that keeps us together. But times have been rough recently because of my move to the UK and thanks to things like Skype, Google Phone, web conferencing, and Google Documents because we use all of these electronic tools to keep us on the same page and keep us coordinated for all of our activities. Otherwise, I wouldn’t know how we would do it.

Part Two of the interview with Aashika Damodar will be posted tomorrow, Monday March 28, 2011.