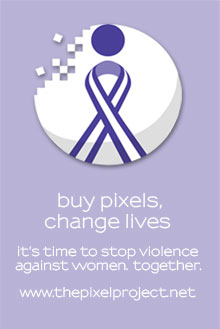 On the centenary of International Women’s Day, Global online nonprofit working to end violence against women launches campaign to raise US$1 million for the cause by selling a world-exclusive million-pixel celebrity male role model portrait collage for US$1 per pixel.

8 MARCH 2011: The Pixel Project, a global volunteer-led virtual nonprofit organisation working to end Violence Against Women (VAW), is proud to launch its first ever Celebrity Male Role Model Pixel Reveal campaign on the 100th anniversary of International Women’s Day. This campaign is The Pixel’s Project’s flagship fundraiser to raise US$1 million for VAW nonprofits while inspiring men and women worldwide to work together to prevent, stop and end VAW. This year’s beneficiaries are Malaysia’s Women’s Aid Organisation and the U.S.A.’s National Coalition Against Domestic Violence.

The Celebrity Male Role Model Pixel Reveal campaign (http://reveal.thepixelproject.net) encourages a global audience to collectively unveil a million-pixel mystery collage of celebrity male role models by donating US$1 per pixel. These world-exclusive male role models’ portraits are taken by award-winning international photographer, Jillian Edelstein. The Pixel Project expects to meet the US$1 million fundraising goal within 12 months of the launch, with the pixels revealing the final role model’s face due to be auctioned off online to the highest bidder. 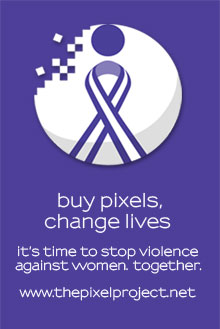 The Pixel Project has invited four world-famous male celebrities from different walks of life to participate in this collage of portraits and to record exclusive public service announcements speaking out against VAW which will be launched as each man is revealed. These prominent men have no history of violence and are role models for men in relationships with women and children. By highlighting positive male role models, The Pixel Project aims to galvanise good men and growing boys to get involved with the cause by demonstrating that men have a major role to play in breaking the cycle of VAW. The distinguished line-up includes a Nobel Laureate, a two-time Pulitzer Prize Winner and superstar Environmentalist.

Regina Yau, Founder and President of The Pixel Project, said: “Violence against women is the most widespread human rights violation in the world and The Pixel Project is delighted that such world-famous male role models have stepped up to join us in securing much needed funds and widespread support for this cause. VAW has long been a taboo issue and we hope that this campaign will help break the surrounding this violence by sparking conversation about VAW in communities across the world.”