Here is part two of our interview with anti-street-harassment activist and author of Stop Street Harassment, Holly Kearl. Part one is available here. To learn more about Holly Kearl and her work, visit her website and her blog.

Over the years, how has the general public response been to efforts at reducing and eliminating street harassment? 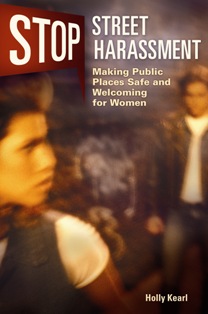 From my research, it seems the general public’s response has been largely the same over the years: to view and treat street harassment as a compliment, a joke, women’s fault, or as a minor annoyance, when they respond to it at all. As the term street harassment makes its way into the public sphere and the general public hears about it in the context of a societal problem, I hope their response will change. I will continue to do what I can to get people talking about it so that there is a shift in dialogue.

Only men who are supportive have come to my talks so far, so I haven’t had to address negative comments to my face. Sometimes they want clarification about how to appropriately talk to a woman in public whom they don’t know, but they are always respectful when they ask.

Online responses from some men are a different story. Whenever stories about street harassment make it into the mainstream media, inevitably I see comments from men like the following: “What do women expect with the way they dress?” (acknowledging that they harass women but that it’s women’s fault); “I’d love it if women on the streets told me I’m hot” (framing street harassment as a compliment and missing the fact that a lot of the harassment is negative and/or threatening and scary); “Find something serious to complain about” (dismissing it as a real problem); and “I’ve whistled at women and they liked it” (again not denying that they do it but disagreeing that they need to stop).

When articles I’ve written have been published for mainstream publications, I see these types of comments but also read additional ones directed at me. Men may tell me I’m “jealous” that other women experience street harassment (which is dumb since often in the article I mention that I’ve experienced it too and hate it) or they’ll tell me I should gain weight or just stop being in public alone. I’ve also been told I must be ugly and a lesbian. And sometimes men attack my blog by sending hateful and offensive comments. For a few days, men from one online forum took turns sending me fake stories that all ended “hahaha, jk, bitch.” That can be scary and it’s always upsetting.

The New York City Council members were very supportive of the suggestions we gave during the hearing and they are pursuing a city-wide street harassment study. From there, they can determine what legislation and policy reform may be necessary.

I think it will take a lot more time before we see a law against all forms of gender-based street harassment (if we ever do). First of all, we need more studies about its prevalence and the impact it has on women and on society in general before lawmakers and policymakers will address it, and it will be a while before we see those studies. Once the studies are done, however, I think the evidence will be strong enough that policy and lawmakers won’t be able to ignore it. Plus, if countries like Egypt and India pass and enforce anti-public sexual harassment laws, it should be easier for people in the United States to point out that we are behind other countries in addresses these issues.

You’ve done work in various parts of the world, including in places diversely different from your home country, including New Delhi. What are the challenges that you find when dealing with street harassment in different countries?

I only speak English so that limits how much I can truly work on these issues globally. That is my biggest challenge. I am anxious to learn about the forms street harassment takes in other countries and what action people are taking to end it. I love learning new ideas for ending street harassment and featuring successes around the world on my website, in my book, and when I give talks.

I don’t go any place and say, you must do x, y, z to end street harassment. Each culture and community is different, so what I do is provide a range of suggestions and success stories so that people can gain ideas about what may work in their culture, in their community.

a. Street harassment experience must be given a name and people must be educated about what it is.

b. Street harassment must be recognized as a problem (studies and women’s stories can help).

c. Street harassment must be seen as socially unacceptable behaviour.

d. Youth must be taught what constitutes street harassment and that it is not okay and what they can do to stand up for themselves and others if they see it happening.

e. While not always necessary, it can help if there are laws against street harassment because that can shape public opinion, deter harassment from occurring, and give survivors or witnesses a way to seek justice.

f. Communities need to come together to creatively address street harassment occurring in their areas.

g. On a broader scale, societies must achieve gender equity, promote respect for women, end the objectification of women, and end gender-based violence. (This is the most daunting and important one)

Could you give us a few examples of great initiatives around the world that have successfully reduced street harassment and what are the lessons we can gain from these examples?

I haven’t come across data that showed before and after harassment rates to know what methods have definitively reduced street harassment. I do know from anecdotes that when entire communities become involved in addressing specific street harassment issues there is a better chance that harassment will lessen. There is also some evidence that cultures that have more gender equity have fewer instances of street harassment.

Community groups like Blank Noise and Jagori in India, Young Women’s Action Team in the Chicago area, and the Egyptian Centre for Women’s Rights in Cairo have all undertaken multi-level action to address street harassment. I feature them in the last chapters of my book and I encourage people to go to their websites to learn about their work.

On that note, what is the toughest thing about working in dealing with street harassment in general?

It’s very sad to read story after story about men dehumanizing, humiliating, scaring, and disrespecting women and then see those experiences dismissed by the general public and online commenters. When I give talks, inevitably a few women will share their stories and that can be emotionally taxing because I have great empathy for them and wish I could give them a magic formula to make the harassment end for good.

I also find it tough to have to spend so much of my time simply justifying that street harassment is a problem, not a compliment or women’s fault. If I didn’t have to spend my time on that issue over and over, I could achieve a lot more!

In your opinion, what should and can a woman do when she encounters street harassment, either against herself or another woman/girl?

Women and girls have to do whatever will be the most empowering and safest for them at the time. Generally, not simply ignoring or walking on by but responding will be the most empowering and as long as girls and women do not use profanity, insults or anything else that may escalate the situation, they should be safe. Telling a harasser to stop what he is doing, to stop harassing women (generally), or to ask him why he thinks he can talk to a stranger that way are examples of assertive, non-violent responses that often work at diffusing the situation and empower the woman. More suggestions are found in my book and on my website: http://www.stopstreetharassment.com/strategies/responses.htm

Is there anything else you would like our supporters to know about street harassment?

If you’ve experienced street harassment, I encourage you to talk about it with someone or share your story in some way. It can be empowering and cathartic to talk about them, especially the ones you have never shared. The more people speak out, the harder it is for the larger society to ignore or dismiss it as a problem. Also, people tend to care about and take action when they know someone they care about is impacted by the issue so sharing our stories and speaking out is a great way to inspire others to speak out or to take action to end this problem.

If you haven’t experienced street harassment, I suggest you ask female friends, family members, co-workers, neighbours, if they have If they have, see if they feel comfortable sharing a story or talking to you about how it’s impacted their lives. There’s no better way to learn about this issue than from someone you care about who has experienced it.