Skip to content
Home > From Our Partners > Support The Pixel Project: Get a Limited Edition “Purple for a Purpose” Tote from ModCloth 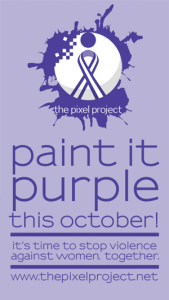 We are thrilled to announce that, in conjunction with our “Paint it Purple” campaign, ModCloth, the innovative fashion e-retailer, has produced a limited edition “Purple with a Purpose” tote bag that will go on sale today, Monday October 18, at 3PM Eastern Standard Time (USA).

Proceeds from sales of these chic little tote bags will help fund our upcoming Pixel Reveal campaign which benefits our Partner Beneficiaries, the National Coalition Against Domestic Violence and Malaysia’s Women’s Aid Organisation. International shipping is available, and we encourage you to log onto ModCloth.com to buy a bag and show your support for The Pixel Project!

The complete news release about the bags is included below.

ModCloth, an innovative online retailer specializing in fashion and décor from independent designers, is honouring National Domestic Violence Awareness Month this October 18, 2010 by selling a collection of “Purple for a Purpose” grab bags. The bags will will go up for sale at 3 p.m. eastern time and are expected to sell out quickly. A portion of the proceeds from the special tote bags, filled with an assortment of ModCloth accessories, will be donated to The Pixel Project, a global nonprofit which seeks to raise funds and awareness to stop violence against women around the world. Specifically, the sales from the totes will help support the Pixel Project’s upcoming Pixel Reveal Campaign, which will benefit the National Coalition Against Domestic Violence (NCADV).

The Pixel Reveal Campaign is a micro-donation campaign that aims to raise $1 million in aid of NCADV and Malaysia’s Women’s Aid Organization (WAO) through a million-pixel mystery portrait collage of Celebrity Male Role Models which will be revealed as people donate to the campaign by purchasing pixels for $1 each.

“The Pixel Project is pleased to partner with ModCloth to offer these special purple tote bags in conjunction with our global ‘Paint it Purple’ campaign for Domestic Violence Awareness Month,” said Founder and President of The Pixel Project, Regina Yau. “We thank ModCloth and ModCloth’s fans for their generosity and hope that these totes will not only be useful for those who buy them, but also serve as a small reminder that we must never be silent in the face of domestic violence or any other form of violence against women.”

In the past, ModCloth has sponsored other charities including the Pennsylvania Breast Cancer Coalition, the Pennsylvania Resources Council,The Women’s Center and Shelter of Greater Pittsburgh, and the Washington Area Humane Society.

About ModCloth.com:
ModCloth.com is an e-retailer that sells affordable independent designer women’s fashion. They’ve attracted a large, devoted following through their unique selection of indie clothing and engaging promotions on the
ModCloth Blog and social networks. The company is founded by husband and wife team Eric Koger and Susan Gregg Koger.

About The Pixel Project:
The Pixel Project is a volunteer-led global 501 (c)(3) nonprofit organization whose mission is to take fund-and-awareness raising for the cause to end violence against women into the 21st Century by delivering innovative, powerful viral campaigns across various online and virtual channels including social media. Their first project is to turbo-charge global awareness about Violence Against Women using social media while raising US$1 million for Malaysia’s Women’s Aid Organisation and the U.S.A.’s National Coalition Against Domestic Violence by getting a global audience to collectively unveil a million-pixel mystery collage of Celebrity Male Role Models at US$1 per pixel.