Kit Gruelle is a survivor of domestic violence who has worked as an advocate for battered women and their children for almost 30 years. As a renowned community educator, she has trained and empowered scores of advocates, criminal justice professionals, health care providers, clergy, legislators, educators and other allied professionals to prevent family and domestic abuse. She served as a commissioner for the NC Crime Victims Compensation Commission for 12 years and has been an instructor for California POST (Peace Officers Standards and Training) for seventeen years.

She is the subject of Private Violence, an intimate and compelling documentary on domestic violence which premiered at the 2014 Sundance Film Festival and on HBO on October 20,2014. Private Violence is described as shedding “light on the cycles of abuse and the shortcomings of law enforcement and the justice system with extraordinary courage.” Executive Producer Gloria Steinem partnered on Private Violence because she felt it “exemplified domestic abuse better than any film [she] had ever seen.” An interview with Gruelle and director Cynthia Hill can be seen at www.Democracynow.org

In Part 1 of her interview with The Pixel Project below, Kit talks about how she escaped an abusive relationship and came to tell her story in a documentary film.

The second part of her interview will be published February 23, 2015.

Trigger warning: Parts of this interview may be triggering for women who have survived or are currently facing domestic violence. 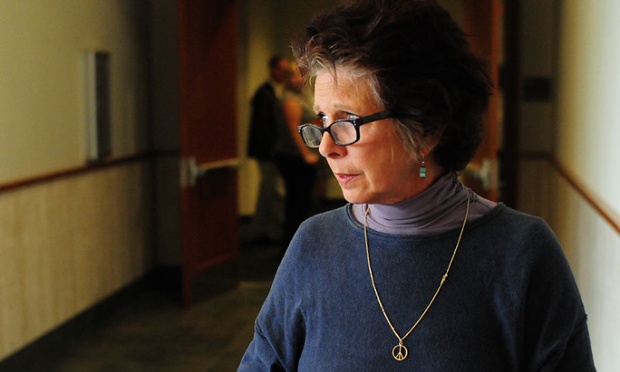 1. Your story of surviving domestic violence has been shared in HBO documentary “Private Violence”. Please tell us your story of being a survivor.

In the Fall of 1979, I tried to commit suicide because I could not take the abuse and the terror anymore. It is a long story, but suffice it to say, Jack – my abusive husband – found me after I had taken the pills, took me down to the hospital to be treated, and I survived. Not long after that, I took the boys and fled to New England where I was going to try to hide out and start over. He was a United States Marine Corp/Vietnam veteran who told me that there was no place “on the planet” I could go to get away from him.

I got lucky, he was killed in an off-shore accident in August of 1979. I had prayed for something to happen, but I never expected that he would be killed because he seemed indestructible, like some kind of superhuman. When his body came back, I went down to the funeral home and sat with him for quite awhile. I could not believe that he was really dead. I fully expected him to rise up and grab me by the throat one more time. And I also felt like, somehow, his death was my fault.

2. Was there a particular moment when you realised that you had to leave to survive? How did you find the courage?

I left several times. Jack used to call it my “disappearing acts.” I would leave because I was afraid to stay, but I went back because I did not have an option. I knew how dangerous he was, but I fled with the boys because I believed he was about to kill me. I knew that he would find me, no matter where I went, so going home was the only way to stay alive.

I think this is one of the issues many people on the outside [of domestic violence] fail to understand. Back then, there were no Domestic Violence programmes (hot lines or shelters), so I had to try to figure out what to do on my own, or with the help of a few friends. Jack bought guard dogs so that I could not get out and others could not get in. I realise now, looking back, that I was, in effect, a hostage. It’s one of the things I talk about when I teach the DV for Hostage Negotiators class in California: battered women are hostages in their own homes, and we have to act and respond accordingly.

3. You have said in an interview that we need to start asking better questions about domestic violence. The age-old “Why didn’t she just leave?” is now a redundant question. Please tell us more about this.

I am amazed that, after all these years, asking abused women why they do not “just leave” seems to still be the standard and victim-blaming response. I try to get people to think about it by doing a comparison: Let’s say a local bank has been robbed 3 or 4 times (or more), and it gets robbed again. When the 911 call is made, law enforcement officers respond. When they complete their investigation, they do not go to the bank president and ask him or her why that bank is still doing business in that location, or ask them if they like being robbed. And yet when a woman is abused, the first thing we tell them to do is “just leave.”

For one thing, she and the children have done nothing wrong. By forcing her and the children to leave, we are, in essence, colluding with the abuser. As long as he thinks he can continue to be abusive, controlling and violent, and still not receive any community sanctions at all, he’ll continue to be abusive. It is outdated thinking, and it is wrong.

4. Many survivors have feelings of shame. Did you experience these feelings and how did you combat them?

Yes, I experienced guilt and shame. My husband died, and, despite the fact that he was in the Gulf of Mexico and I was in the NC Mountains when he was killed, I still felt like the entire thing was somehow my fault. I kept my feelings inside for a long time, but slowly, and after I became involved with the battered women’s movement, I started to understand that his abuse was because of his choice and need to be abusive, not because of something I did or did not do. And I met and developed wonderful friendships with strong, kind, thoughtful and supportive women and men who helped me see everything through a completely new lens. It was a revelation.

Also, working in the battered women’s movement as an advocate and studying the Power and Control Wheel, not just as a tool to explain abusive relationships but also as a way to understand society in general helped me to see how women have guilt and shame routinely used against them.

5. Telling your story to the cameras is an incredibly brave decision. How did you find the strength to speak out about your story?

The film project was originally supposed to be about the history of the battered women’s movement in America. I decided about 12 years ago that most people knew nothing about this amazing movement because so much of the work goes on in tucked-away places like shelters, via hotlines, on in the back rooms of courthouses. The first woman I worked with was a filmmaker in San Diego. We worked together for about five years until the money ran out, and then I started working with Cynthia Hill (from Durham, North Carolina) to get it completed, and the film went in a different, more intimate direction. She started shooting me working with women in North Carolina and California, then she said that she wanted to include more of me. By that time, I was fairly comfortable with what she was doing and I felt strongly about sharing what I had learned over the years, so I agreed to do it. 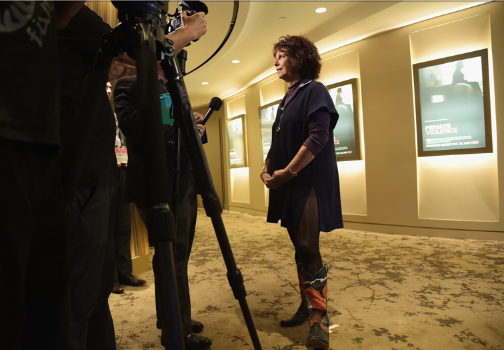 One thought on “Inspirational Interview: Kit Gruelle – Part I”