Grace Brown is a photographer and public speaker and the founder of Project Unbreakable. Grace is originally from Massachusetts. After having discovered photography at 17, she immediately became passionate about art and went on to study it at School of Visual Arts in Manhattan. Shortly into her first year, she created Project Unbreakable, a photography project portraying survivors of sexual assault holding posters with quotes from their attackers, which she also speaks about at colleges around the country. Since its conception in October of 2011 by then-19-year-old Grace, Project Unbreakable has featured over four thousand photographs, both photos taken by Grace as well as submissions from all over the world.

The second part of Grace’s interview will be published on November 24th. 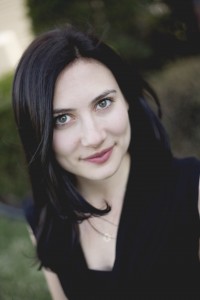 1. For our readers who are unfamiliar with Project Unbreakable’s work, please give us an overview of how you support survivors of sexual assault and raise awareness on this subject.

Project Unbreakable was first created in October of 2011. I started by photographing survivors of sexual assault holding posters with quotes from their attackers. Originally, I just wanted to bring awareness to the issue and I wanted our society to talk about it more. After it was published online and after more people were photographed, I discovered that there was a healing power behind writing down the words of the attacker – people were letting go of the things that were said to them.

2. Your website bio says: “Since a young age, she has carried a pull in her heart to stand next to and support sexual assault survivors.” When did you first acknowledge “the pull” to support survivors– did you have a “light bulb” moment?

I actually did not have a “light bulb” moment. It just always seemed obvious to me to do so! I just had so many people in my life share stories with me, so many people I cared about were affected by it.

3. Project Unbreakable’s innovative and pioneering way of raising awareness has struck a chord with survivors of sexual assault across the globe. Why do you think this is?

Thank you! I appreciate that. I think it has been effective because it humanises statistics. Someone can see a photo with the same quote that was said to them and think, “Wow. I’m not alone.”

4. “Project Unbreakable has really helped me start to feel comfortable with what’s happened to me. I know that I’m not alone and that no matter what other people tell me, it wasn’t my fault. Thank you for that.” This is just one of the incredible testimonials on your website. Project Unbreakable has given many survivors the strength to speak out. Why is speaking out so important?

Speaking out is incredible because it lifts a weight off of you – someone else is there to help you carry that weight. As much as we encourage speaking out, we also know that sometimes people aren’t ready. And that’s okay too. 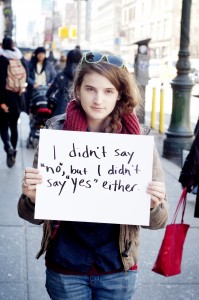 5. Some of the words on the posters must have been so difficult for a survivor to write. Have you ever had a survivor feel re-traumatised by writing the words of their attacker? How do you offer them support?

It can be very difficult to write down those words. We always provide a space to listen if they need to be heard, and a space where they know they are believed and supported. Sometimes, if a survivor is feeling especially nervous, they bring a friend along, which can be hugely beneficial and powerful for them.

6. “Project Unbreakable helped my boyfriend begin taking what had happened to me and other people more seriously… and then the number of people pictured with their signs helped him understand it really is as frequent as studies say.” Another testimonial from your website. There is still a culture of ignorance and disbelief when it comes to sexual assault in every country in the world. How is Project Unbreakable breaking down these barriers?

I think Project Unbreakable breaks down these barriers because it really shows that it can happen to anyone – it doesn’t matter the age, gender, sexual orientation, socioeconomic status etc.