We continue our inspirational interview with Laura Bates, feminist writer, media critic, and activist. In this part of the interview, Laura talks more about her work developing The Everyday Sexism Project to address street harassment against women and the emerging prevalence of grassroots campaigns that are developing on social media and the engagement of men in advocating against street harassment . 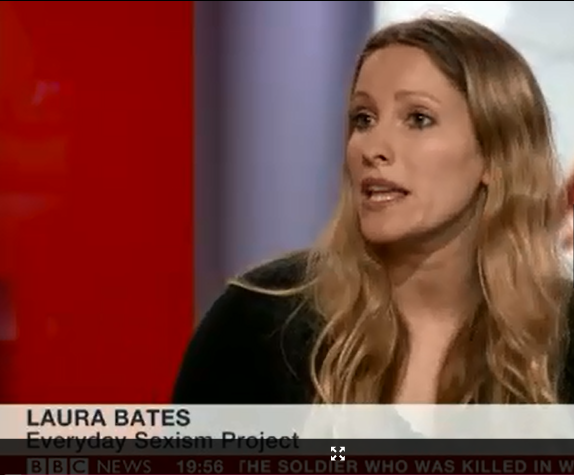 5. Many of the tweets Everyday Sexism receives are from women who experience street harassment. India has endemic problems with street harassment as well as violence against women. Grassroots initiatives like “Blank Noise” in Delhi have seen success in fighting back against harassment. How do you feel we can effectively tackle the problem of street harassment?

Tackling street harassment has to involve engaging everybody – we must not focus on the behaviour of victims, but rather try to encourage bystanders and witnesses to step in and send the message that it is not acceptable. This is the only way to shift the feelings of shame, embarrassment and fear onto the perpetrator instead of the victim, and to create the cultural shift we need to move away from the ingrained normalisation and acceptability of street harassment.

6. How do you feel about the recent trend in engaging men to fight sexism and gender based violence?

I think it is a vital part of the movement, we need a cultural shift in attitudes and behaviours towards women around the world and we can’t achieve that without half of society on board. It is also vital to recognise that this is not about men versus women, but about people versus prejudice; that men can be affected by gender inequality too, and we know that some women can be sexist. This is not a women’s issue but a human rights issue, and as we all benefit enormously from the effects of gender equality (from stability to economic growth), it is in everybody’s interest to get on board!

7. You have famously stated that you did not know what feminism really meant before Everyday Sexism. You are now at the forefront of what has become known as “The Fourth wave of Feminism.” What does feminism mean to you today and why is it so important?

For me, feminism very simply means thinking that everybody should be treated equally, regardless of their gender. That is it! It does not mean hating men, or wanting women to take over the world, or being angry, or having no sense of humour, or any of those stereotypes and clichés!

8. Many survivors want to share their stories but are too scared to speak out. What has the Everyday Sexism project taught you about the importance of survivors speaking out and breaking the silence that surrounds abuse?

It has taught me how incredibly powerful the simple act of telling your story can be, both for the person who tells it and for the person who listens. For so many women who have shared their stories with us, often for the first time, often after years of silence, they explain that the catharsis of just telling their story and being heard can be enormous. And for women who have tried to speak up before, but been dismissed, silenced or disbelieved, there is a great power in just having the truth of what happened to them finally accepted.

What I’ve come to understand about breaking the silence around abuse is that it is contagious. For every woman who speaks out, we hear from another five or ten who were inspired by them to speak out too; or from women who did not know they had the right to protest until they heard other voices speaking out against what they had come to accept as the norm. Silence is created by shame, misconceptions and blame, and only by speaking out can we shatter those damaging ideas about victims and place the real blame where it belongs – with the perpetrator.

That’s a huge question with so many possible answers! But I think it has to start with a cultural shift in our ideas and attitudes towards women around the world. We have to tackle the normalisation of sexism, misogyny and violence against women. We need to encourage people not to accept the behaviours and attitudes that are ingrained in our society and passed down to us, but to question and challenge them instead. At the moment, violence against women is still accepted as just ‘part of life’ – it has become part of the wallpaper, and only by challenging that idea, and seeing it as the human rights violation that it is, can we start to truly tackle the problem.