This month’s Inspirational Interview is with Angelique Mulholland, a women’s human rights activist, teacher and freelance writer based in Bath who is one of The Pixel Project’s long-time writers and interviewers. She recently wrote and produced a short documentary, ‘FGM in the UK’ which was published on The Pixel Project YouTube channel on 1st November 2013 as part of our Inspirational Interview series. Angelique tells us how she became involved in activism, her experience of making a documentary for the first time and how others can join the fight to end gender based violence.

You can tweet Angelique @leakym if you’d like to ask her any questions. If you have not watched the documentary, you can scroll to the bottom of the interview to watch it from there. 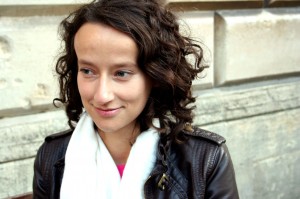 1. When did you first learn about Female Genital Mutilation (FGM) and why did you decide to make a stand?

I joined Amnesty International at the age of 18 and I have always been passionate about human rights issues. In 2009 I decided to focus my time and energy on women’s human rights. The more I started reading on this particular issue the more horrified I became on how little was being done by governments to stop most forms of gender based violence. FGM is one of the most disgusting and brutal forms of violence against girls and I found it disturbing that it received so little attention in the UK. I felt compelled to try and do something to change things and get the FGM message out there.

2. How do you feel about the progress that has been made on FGM in the UK? What needs to change in the UK to eradicate this practice for good?

‘Progress’ is a difficult word when it comes to FGM in the UK. There have been steps forward. For example, the recent report on FGM by leading healthcare organisations; the new NSPCC FGM helpline; the government’s £35 Million grant to eradicate FGM on a global scale.

However, so much more still needs to be done. No one has been prosecuted under the FGM Act of 2003 and there are no national statistics as data is not formerly collated. This has got to change. FGM is a horrific form of gender based violence and it is a travesty that it is still being practiced. Education and Healthcare professionals are entrusted with safeguarding children yet many have no idea what FGM is. We need to train these professionals, as well as teachers, nurses, GP and midwifes to spot the signs and symptoms of FGM. If a child is at risk of FGM, frontline workers need to be able to report it in a professional and speedy manner. At the moment, on a day to day basis, this is not happening and girls are being failed all over the country.

3. How did you feel about presenting a documentary video for the first time and what advice would you give someone who is thinking of doing something similar with the aim of eradicating violence against women?

First of all, I really enjoyed the experience. Of course it’s inevitable you mess up sometimes and you then have to do retakes but it’s all part of the process. (And part of the fun!) The process gets easier and easier and often leads one to new opportunities. Since making this documentary I have been interviewed on a live BBC radio programme and I have interviewed a government Minister. If you told me 10 years ago I’d be doing these types of things today, I would not have believed you!

If you’re not sure where to start, begin by identifying an issue you feel strongly about. Then get in touch with charities who are already working on this issue and offer to interview them to raise awareness. Most women’s human rights charities are desperately under-funded. So they will most likely jump at the chance for you to help raise awareness. Watch other documentaries for ideas and inspiration. If you’re not sure how to operate a camera or edit footage, do some self-study on the internet (there are hundreds of Youtube videos to help you) or alternatively work with friends or colleagues who already have these skills and learn from them. Don’t be afraid to ask for help. Work with positive, supportive, reliable people who also have passion and drive. It’s amazing what you can achieve when you are all on the same page.

4. What advice would you give to anyone who wants to get involved in campaigning on FGM and women’s human rights issues?

Start today. We need to work together to break down the barriers of eradicating FGM and other human rights violations against women, and the more people working on this the better. It’s easy to get involved. You can contact one of the charities who are working to end violence against women and offer your time and skills. More often than not, your time, passion and expertise is more valuable than your money. Just being an advocate of change and not being scared to talk about these issues is immensely helpful.

November 25th is International Elimination of violence against women day followed by #16days of activism to end violence against women and girls. There is no better time to start campaigning! If you’re not already on Twitter, set up an account and start sharing and tweeting articles on women’s human rights campaigns and initiatives using the hash tag #16days. Violence against women is a global epidemic and only by working together will we see real and lasting change.

5. What are your next steps?

I am currently collaborating with an Italian video journalist and we are working on a short film about trafficking for the purposes of sexual exploitation. This film is a dramatic piece which is based on a true story about a young girl who was trafficked from Nigeria and forced to be a prostitute in the UK. We were overwhelmed with the talented actors who offered their time to work for free on this project. We are currently in the editing stages and the short film will be published next year.