The final Dad in our series is Chris Kinsey from the USA. Chris is an aircraft assembler by trade and a musician by hobby. He is married to Barbara Kinsey (a longtime Pixel Project volunteer), and is the father of two wonderful boys, Gunter and Trenton. Gunter is 13 this year, and the influences of teaching him how to treat women with proper respect is already showing. Chris mat met Barbara through a “friend” and has been married for 13 years. He considers her his best friend and looks forward to a lifetime together of adventure and love. He says: “While I already had a strong sense of treating women with respect, I learned a lot from Barbara about how mistreatment affects women by seeing how her first husband mistreated her. I have actively encouraged her to tell her story and I support activities to stop violence against women. “ 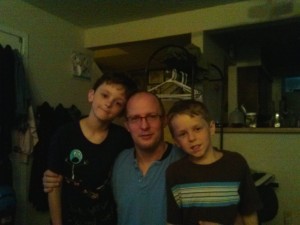 The best thing about being a father is looking into my son’s eyes (either one) when I am spending time with them doing their favorite activity (such as gaming). The genuine excitement and the love that shines through is worth every moment of lack of sleep, lateness, etc., which comes with the territory of being a parent.

My father’s habits were to pick terrible women and not treat them well. This influenced me to become a better father, husband, man, by treating the women/girls in my life with respect, love and honesty. Though I have not always been the best at it, I strive to improve every day. Additionally, I work hard to teach my boys how to treat their mother and other women/girls in their lives.

There are two ways that father and other male role models can help young men take an interest in ending violence against women. First, teach them the right and wrong ways of treating women. The second is by leading by example. I have worked diligently to teach my boys and others the right and wrong ways to treat a woman. I exhibit these behaviors no matter where I am or who I am with. The best example I have is when I open the door for Barbara. Both of our boys, Gunter and Trenton, have developed a desire to open the door for their mother as well, seeing me model respectful behavior. I also teach and model respectful and equal behavior with a friend’s child (single mother), I act as a role model in her son’s life by setting firm rules about how to treat his mother and other women.