Formerly in pastoral ministry, Jim Flom has recently made a change to law enforcement. He is married and the father of three girls and a boy, all young adults now. As Jim states, he was born the day the space age began and grew up happy and confident. His parent’s divorce changed his life and propelled him into Christianity for a spiritual center and Outward Bound for empowerment. Instead of repeating wounded familial patterns, he was challenged to make his marriage different. 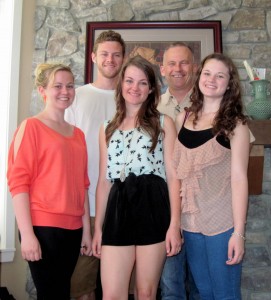 The best thing about being a dad is seeing my children excel at the things they love. For one, it might be sky-diving; for another, singing, cheerleading, acting, or music. I love to see myself in them and to have them confide in me and share their struggles.

My father was a civil rights activist before it was popular. As a commanding officer for an all African-American company during World War II, he experienced institutionalized racism first hand. He returned to Minnesota and fought to integrate his fraternity. Afterwards, he served two terms as a state legislator and actively advocated for equal rights. My father’s example led me to have a strong social justice conscience, which ultimately cost me my career as a pastor when I stood with an exploited woman against the powerful. I wish for my wife and daughters the same empowerment I advocate for anyone.

Men help prevent violence against women by leading by example. Children watch closely and see how their dads treat their mothers, how they speak about women. By staying informed about issues, voting regularly, and participating in public life, men demonstrate their interest in justice and equality, but the rubber meets the road in the home, workplace, and in the public square. I take on this responsibility by making sure that my staff know that I will back them 100% in situations involving disrespect, sexism, racism arise.