John Paul Dean is the father of Pixel Project’s Twitter Tag Team Coordinator, Rebecca Dean. He lives in Seattle with his wife and is the proud father of four adult children, who are happy he always keeps the coffee pot full and fresh at home. 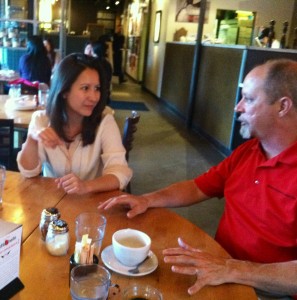 The best thing about being a dad is seeing your children develop and grow into their own unique beings; and then to see them as adults become happy and successful.

My father showed respect for women and he not only modeled such respect through his behaviour, he demanded of his six sons to do the same. He had an old-school approach in that he believed women should be cherished, cared for, and respected. However, today the emphasis is on mutual respect and less on the care for women aspect of his philosophy. These are the values I emphasize with my children.

I think the best way to be a role model is to set an example through your behaviour. There’s a certain command of respect that is required to be a male role model. You have to demonstrate respect to command respect and then show this to your sons. Also you need to show there are consequences to mistreating women and that you hold yourself to the same standards and are held to the same consequences.